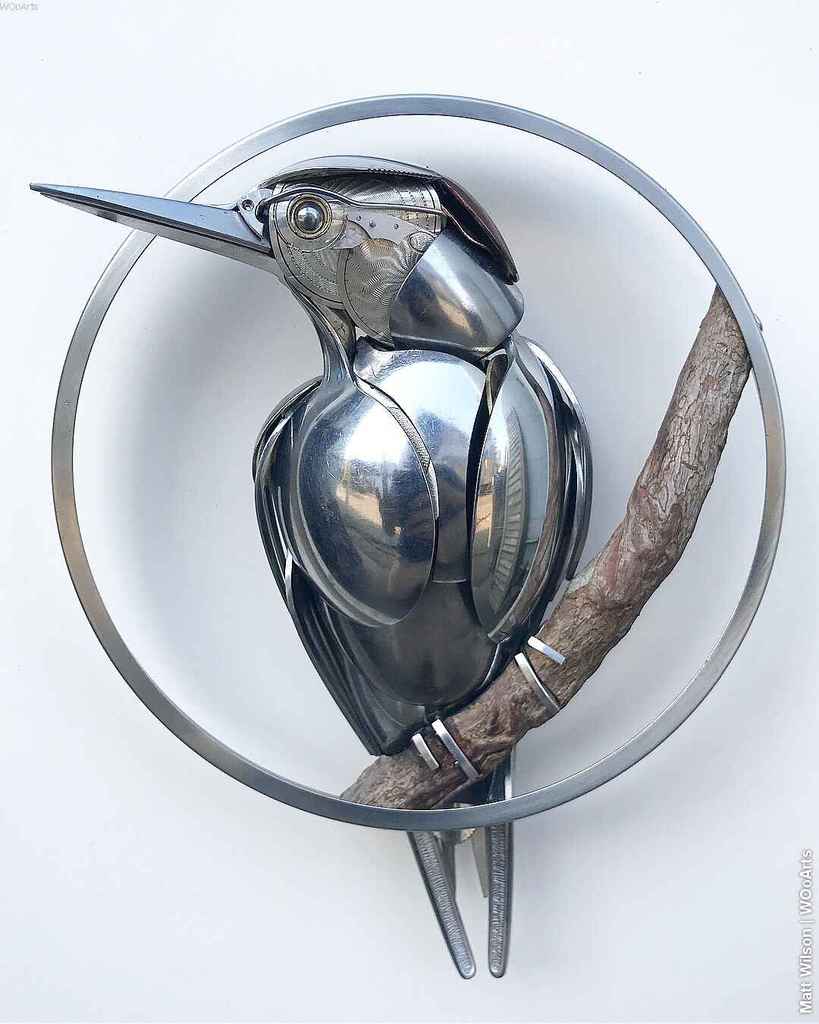 Matt Wilson was born and raised in Greenville, South Carolina, and from a young age showed, not only an interest in art, but an innate creative talent.

His senior year of high school, he was accepted to attend studio arts classes at the Fine Arts Center of Greenville, the first specialized art school in the state. From 2002 to 2005, Matt attended Winthrop University in Rock Hill, S.C., where he worked on an arts degree in drawing and painting.

In 2006, Wilson was not only ready for a change in scenery, but also for a change in medium. He moved to Charleston, S.C. and became interested in metal sculpture and motivated to learn a new skill. Following a job lead, he gained an interview with Detyens Shipyards for a welding position.

Upon interviewing with Loy Stewart, the owner of Detyens, he was offered a unique opportunity – to become the resident artist and learn how to weld. Matt’s primary job is to build metal models of the ships that are serviced in the shipyard.

The models are then given to the port engineers as a “thank you for your business”. When he’s not building ships, he is is working on commissioned pieces or creating new art.

Matt Wilson’s workshop is filled with clutter and chaos.
A large, waist-high table is littered with hammers, an old fan, and a toolbox. There are piles of old spoons, forks, and knives. Wilson is always on the lookout for “found objects;” he rummages junk shops and going-out-of-business hardware stores to add to his vast collection. Where one person sees a jumble of junk, he sees the beak of a Red-Tailed Hawk orthe leg of a lobster. “It’s taken me years to collect all my materials, and I’m continuously developing my skills to work with these materials. I spent most of my life as an artist working in 2-D, drawing and painting. When I moved here eight years ago (to work as Resident Artist at Detyens Shipyard), I wanted to try a different medium, metal sculpture, and learned how to weld.”

Welding is loud, hot, and physically demanding work. Wilson wears a mask to protect his face from the flames that transform utensils into a delicate bird, or dental tools into a crawfish. His sculptures are playful and unique. Many of the birds and fish are small enough to hold in your hands, and all reflect the natural environment.

“I definitely think artists can bring awareness to the way people think and feel about the environment, in hopes of bringing forth proactive discussion and change.”

A cacophonous construction zone is not the place you’d expect to find a man crafting birds out of bent spoons, but Matt Wilson is anything but typical. As the resident artist at Detyens Shipyards, his job is to make models of the ships being repaired at the complex. Piles of parts discarded from Coast Guard cutters and Naval ships become Wilson’s off-hours creative playground, with nuts, gears, and scrap metal reappearing in sculptures like a mosquito drawing “blood” from an oil barrel or an octopus light now hanging at Palmetto Brewery. The Park Circle dad filled us in on his artistry.

Following his passions: I left Winthrop University when I had one year left to get my degree. All I wanted to do was be creative.

Landing a dream job: Loy Stewart, who owns Detyens, asked me what I would do with my life if I had a magic wand. I said I wanted to be an artist. I wanted to learn to weld so I could transition my art to metal sculptures, and he created a job for me. Now, every captain is given a model of their ship as a thank you for their business.

Big aspirations: My background is in drawing and painting, but I’m not comfortable doing the same thing for long. Right now, I want to try to be the best sculptor in Charleston.

What’s in the name: I named my company “Airtight Artwork” after my college nickname. People called me “Airtight” because I never said a word and kept to myself. It’s also a character from G.I. Joe.

Personal touch: I just did an octopus for a woman. I did some research, found out she was an amateur photographer, and used camera lenses for the eyes. Now I’m working on an Apache helicopter for a guy who plays trumpet, so I’m using brass instrument parts.

Reusing & recycling: The scrap pile is a playground for me. I just found a shovel handle that looked like a spout for a genie lamp, but now it’s going to be a trunk for an elephant.

Goodwill hunting: I buy a lot of silverware from Goodwill, looking for patterns and sturdiness. I have a Robin Hood idea to steal spoons from a high-end restaurant, turn them into a bird sculpture, and give that back to he place.

Recent work: One of my new sculptures is a broken iPhone in an old small-game trap. We always get trapped on our phones, and now it is the one being trapped.

Creative gift: I have recently started “bird bombing”—I always have a bird in my car to leave somewhere, my first attempt at street art. There’s one on top of the stage at the Sewee Outpost I put there before a Barn Jam.

Charleston artist Matt Wilson used old piano parts to fashion this year’s CPMA trophies
Lost and Found
By Kelly Rae Smith
Matt Wilson isn’t a welder by trade. But looking at some of the metal-based sculptures he’s created, it’s hard to believe he taught himself welding relatively recently, via his day job.

“I was given the opportunity several years ago to be the resident artist of Detyens Shipyard,” Wilson says. “Before I honed my metal skills, I drew portraits of every ship that came into the shipyard. The owner would then give it to the captain or port engineer as a thank-you for the business. Over the years, I switched gears and started making metal models of the ships.”

All the while, Wilson has been able to learn the tricks of the welding trade through his nine-to-five. But when he’s not punching the clock, Wilson busies himself in the shipyard’s workshop creating art for his own business, Airtight Artwork. He makes unique pieces out of just about anything he can rustle up, like metal scraps and deer antlers he used to create an elephant head for the Southeastern Wildlife Exposition. “I like to use found objects,” he says. “And I find it to be more meaningful to the client when I can use parts that they can identify with.”

Walk around Palmetto Brewing Co. on Huger Street, and you’ll see Wilson’s signature everywhere, from the urinal he fashioned from an ale barrel to the chandelier he and artist Eric Doran made from 37 beer bottles. His work is all over Charleston, even the streets. That metal raven sitting on a telephone wire behind Lava Salon? That’s all Wilson. He also recently won West Of’s newspaper box competition, attaching metal men made from silverware, plus the local publication’s logo in perfect metal form, to a skillfully spray-painted newspaper box. And local artist Ishmael commissioned a piece from Wilson he plans to use for future exhibits, in town and on the road — a stainless steel genie lamp, which he’ll fill with dry ice for dramatic effect.

While you’re at the CPMAs, have a look at the remarkable little awards Wilson made for each winner using an old instrument he had lying around the house. Wilson knew it would come in handy one day. “Using piano parts for the CPMA awards seemed fitting,” he says. “In deconstruction of the piano hammer, I realized that one piece looked like a microphone, another could be a stand, and a nearby spring worked perfectly for the mic cable. Everything else just fell into place.”