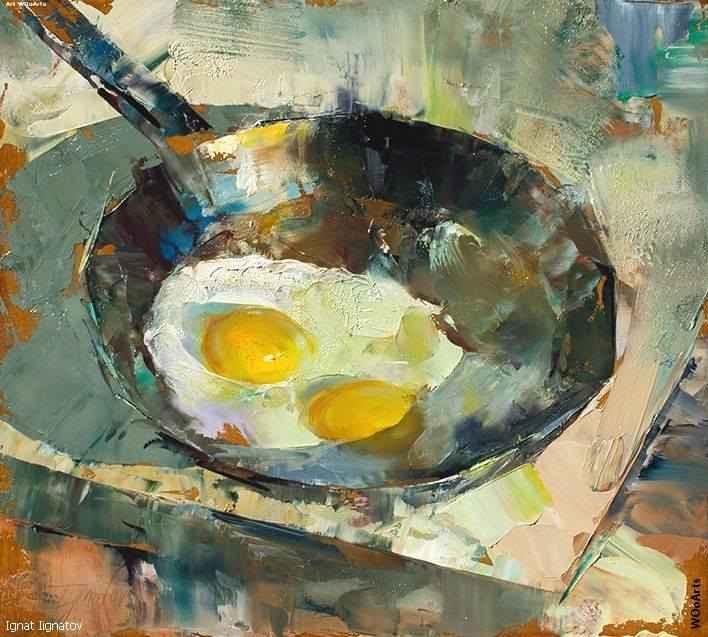 Ignat Ignatov is a contemporary artist with exemplary talent. His interpretation of the spirit of fine art saturates his paintings with a unique expressive richness. Although each new subject seems to dictate the style and approach, his paintings are always alive with color, light, texture, atmosphere, energy, and emotion.

Ignat was born in 1978 in Veliko Tarnovo, Bulgaria and grew up in Sevlievo, Bulgaria. At age thirteen, his promising talent in drawing, painting, and sculpting earned him one of only thirty available spots to attend the renowned Secondary Art School of Applied Arts in Tryavna, Bulgaria.

Ignat’s five years there established the foundation for his academic art training. Following graduation in 1996, Ignat attended St. Cyril and St. Methodius University of Veliko Tarnovo, where he studied under the demanding atelier approach to fine art.

In 1997, at the age of nineteen, Ignat financed his move to the United States using proceeds from the sale of his art. He is now a United States citizen residing in California. Following his move, Ignat studied at the prestigious California Art Institute in Westlake Village, Associates in Art in Sherman Oaks, and the American Animation Institute in North Hollywood.

In 2005, Ignat began teaching painting classes at the Los Angeles Academy of Figurative Art where he taught until 2012.

In 2013, Ignat’s compassion for homeless animals led to numerous art projects. He painted portraits of shelter dogs on death row with the goal of bringing awareness to the dire situation in Animal Shelters in the U.S.

Ignat donated the funds from these paintings to small animal rescue organizations that were willing to save the dogs. He also painted Bulgaria’s street dogs, the proceeds of which helped build an animal shelter in Plovdiv, Bulgaria.

Ignat was most influenced by Nicolai Fechin, John Singer Sargent, Anders Zorn, and Joaquin Sorolla while establishing his own artistic roots. His work includes figures, portraits, still lifes, wildlife, and landscapes. He is an avid traveler whose work is inspired by his adventures.

Ignat’s primary goal is to continue cultivating his unique style, by expressing the form and anatomy as well as color and composition through a representational painting approach.

Ignat Ignatov is a Signature Member of the California Art Club.

Ignat Ignatov Journey of an Artist is the inspirational story of an immigrant artist pursuing the American dream. Conceived by long-time Art School friend, Orlin Ivanov, this full length documentary chronicles Ignatov’s adventures, from his childhood in Bulgaria to his current life in Los Angeles. Born under oppressive Communism and yearning for a life that seemed out of reach, he leaves Bulgaria behind to seek out a life without limits, fulfilling his passion for art. Through interviews, as well as rare footage of the artist at work, Ignat Ignatov Journey of an Artist provides a glimpse into his continuing journey.

The DVD is region-free NTSC. Which means it’ll play on any DVD player if you live in an NTSC country (United States, Canada etc.) If you live in a PAL country (like England) most DVD players will still play it fine, just be sure yours is NTSC compatible. You can also play it on any computer that has a DVD drive.

More:
Originally from Bulgaria, where he also received his initial artistic training, Ignat Ignatov is an artist now living and working in California.

Ignatov paints landscape, wildlife, figurative and still life subjects with a painterly and at times gestural, semi-abstract approach. I particularly enjoy his figurative and portrait subjects, in which he often plays with moody or theatrical lighting, colored accents and abstract backgrounds.

The images on his own website are frustratingly small; you can find some larger examples of his wok on the LePrince gallery site (click through twice from the thumbnails) and in this article on Tutt’ Art.

Though not large, the images on Ignatov’s instructor bio page on the Los Angeles Academy of Figurative Art are a particularly nice selection of his work.

Ignatov offers two DVDs on his website, one is a documentary on the artist, the other is an instructional video on portrait painting.

Ignat Ignatov – (b. 1978) is a young artist with exemplary talent. His interpretation of the spirit of fine art saturates his paintings with a unique expressive richness. Although each new subject seems to dictate the style and approach, his paintings are always alive with color, light, texture, atmosphere, energy and emotion.

Ignatov was born in Veliko Tarnovo and grew up in Sevlievo, Bulgaria. At age thirteen, his promising talent in drawing, painting and sculpting gained him one of only thirty positions to the renowned School of Arts in Triavna, Bulgaria. In the 5 years there, he established the foundation of his academic Art training. Following graduation in 1996, Ignatov was accepted into the University of Arts in Veliko Tarnovo, Bulgaria where he studied under the demanding atelier approach to fine art. In 1997, using proceeds from the sale of his art, Ignatov financed his move to the United States and is now a U.S. citizen living in southern California. He then studied at the prestigious California Art Institute in Westlake Village, Associates in Art in Sherman Oaks and the American Animation Institute in North Hollywood. In 2005 Ignatov began teaching Painting at the Los Angeles Academy of Figurative Art.

In the course of establishing for his own “artistic roots”, Ignatov was influenced by Nicolai Fechin, John Singer Sargent, Anders Zorn and Joaquin Sorolla. Ignatov’s work includes: figures, portraits, still lifes, and landscapes. His goal is to continue to develop his ability to express the anatomy and form as well as color and composition in terms of the artistic disciplines employed by the Old Masters.

Ignat Ignatov | Around the World
By: Virginia Campbell | September 1, 2007

If you were pressed to name an artist who hailed from Bulgaria, you would undoubtedly, if you remembered, name Christo. He is the original “environmental” artist who wrapped a large chunk of Australian coastline in white plastic in 1969 and, more recently, created a series of orange fabric gates in New York City’s Central Park. The painter Ignat Ignatov was born in Bulgaria eight years after Christo put his monumental albeit temporary mark on the coast of Australia—and there the similarity pretty much ends. “We were introduced to Christo at my art school,” Ignatov says, “and I thought he was original and interesting.” In terms of his own interests and ambitions in art, however, it’s perhaps helpful to think of Ignatov as the anti-Christo.

Ignatov’s written statement about his art includes the following sentence: “My goal is to seek representations of today’s world using the Traditional Realism as a tool.” That’s capital “T” and capital “R,” because, explains Ignatov, “It is a style of painting. I could say ‘representational painting,’ but not just ‘realism,’ because in contemporary art, realism is often associated with a tight, photographic quality, and that is not my approach. I like loose brush strokes. That’s why I like the paintings of Sargent and Sorolla and that line of painters going back to Rembrandt, who had very loose brush strokes for his time.”

You can see the influence of these gestural painters throughout Ignatov’s paintings, which include figures, portraits, still lifes, and landscapes. “What I love about Sargent is the confidence of his painting,” says Ignatov, and you can see that quality too in Ignatov’s paintings of trees that splash against a cerulean sky, of fried eggs that take on an unlikely cubist cast, of women’s faces that breathe with a contemporary absence of sentimentality, and of figures with modern body language and old master hues across their features.

Ignatov has had notable success in gallery representation, been accepted into the Oil Painters of America and the California Art Club, and supports himself by selling paintings and teaching a bit on the side. Still, he lives and works modestly in a small space in Southern California and announces that he’d “really like to have a studio with good light.”

Of course, Ignatov is not yet even 30, and it would be silly to doubt that a studio with good light and a great deal more will be coming to him. His talent across multiple genres is unmistakable, for one thing. His desire and energy are high-octane, for another. His timing’s not bad, either, inasmuch as he’s come to the United States armed with many years of traditional art instruction at a time when a large percentage of young artists here are starved for academic training. And beyond all those factors, he’s got the kind of good luck that comes to optimistic people…

Ignat Ignatov | Around the World

He says, “I thrive to explore! Painting allows me to learn and experience my visual surroundings through paint. It gives me great pleasure to discover the emotional impact brush strokes and color have.”