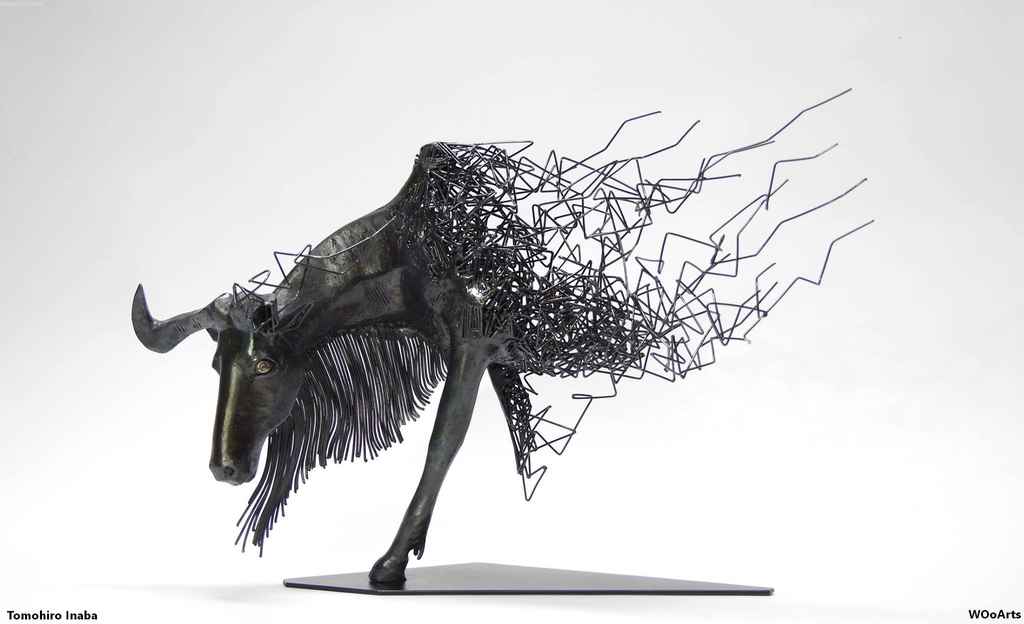 I would like my creations to be “the sculptures that keep engaging with the viewers through their imagination”. This is because I consider one of the ways of art is to be instrumental in bringing the viewers “a fruitful time” to fantasize about something that eyes cannot see.

For this reason I always pursue figures that inspires people’s imagination. I leave “blanks” in my works in order to create sculptures that engage with the viewers through their imagination.
In addition, by capturing the moment of one figure transforming into another, the art works start to tell us stories that evoke the flux of time.

These wire sculptures by Tomohiro Inaba appear to be the 3D manifestation of an illustrator gone mad. Each sculpture appears to start off anatomically perfect, a delicate fawn nibbling in the grass or a sinister black skull resting on its chin, but each devolves into an impossibly complex tangle of steel wire that twists vertically into the sky like violent pencil scribbles. Definitely check out his website for an archive of work spanning back to 2003.

Tomohiro Inaba is a creative sculptor who produces eye-catching figures that look like they are disintegrating into thin air. The Japanese artist’s steel sculptures titled Promise of Our Star and Next to the World are particularly effective in the visual illusion. Each figure offers a duality that lies somewhere between solid sculpture and three dimensional scribbles.

In one piece, viewers are presented with a grazing fawn, while the other displays a leaping deer. Both creatures have solid footing on the ground but extend beyond that point into a chaotic entwinement of wires. Though the fawn is half-way through its disappearing act, the active deer seems to have only just begun its disintegration process. Using a dark iron base and topping it with a similar pattern of clear acrylic resin, Inaba heightens the visual effect of gradual disappearance.

Tomohiro Inaba is a young artist who finished his graduate studies in 2010. He is attracted to iron as a material among other reasons because it begins to rust and decay upon contact with air, practically the moment it is created. For some his two-dimensional work he has used heat-sensitive paper, a likewise ephemeral material.

Though made from solid iron wire, many of his sculptures appear freely woven. Their foundation is an anatomically correct solid form but it shoots off in incredibly complex tangles of steel wire that manifest themselves like violent pencil scribbles. His work has been exhibited in Japan.