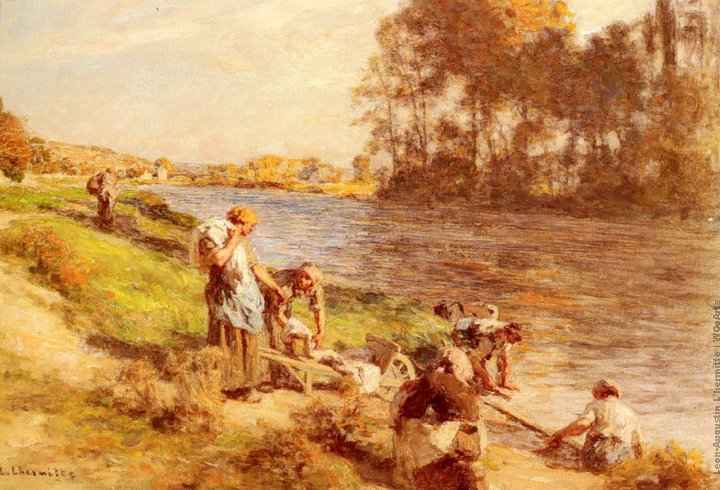 He was a student of Lecoq de Boisbaudran, he gained recognition after his show in the Paris Salon in 1864. His many awards include the French Legion of Honour (1884) and the Grand Prize at the Exposition Universelle in 1889. Lhermitte’s innovative use of pastels won him the admiration of his contemporaries. Vincent van Gogh wrote that “If every month Le Monde Illustré published one of his compositions … it would be a great pleasure for me to be able to follow it. It is certain that for years I have not seen anything as beautiful as this scene by Lhermitte …

I am too preoccupied by Lhermitte this evening to be able to talk of other things.” Lhermitte is represented in the collections of museums around the world, including Amsterdam, Boston, Brussels, Chicago, Florence, Montreal, Moscow, Paris, Rheims, and Washington.

The Gleaners
Léon-Augustin Lhermitte’s ‘The Gleaners” (1887, Philadelphia Museum of Art). A part of the Realism movement and an avid realist painter, Lhermitte depicts the working class poverty in France. Taking very obvious inspiration from Millet, a painting of the same name, Lhermitte in a series of works displayed at the Salon aims to capture this moment in time. When comparing his work to Millet’s, even the poses of the women are very similar if not the same. In the foreground there are two women bent over picking up the grains left behind, those that were not added into the hay stack which can be seen in the background. An obvious difference between this work and Millet’s is that there is no large crowd of people working in the background.

Similarly though the women grasp the wheat in their hands on the left is shown a cache of what they have collected. This is vastly different from Millet’s as his showed how little there was left. Lhermitte shows quite a bit of excess. When viewing the ground, identifying individual wheat grains is difficult if not impossible. This could be a representation of how difficult the work is, the endless task of gathering enough wheat to keep the families of these women fed. Around the same time the painting by Lhermitte was published and presented at the Salon, Millet’s own “The Gleaners” was beginning to receive public appreciation. This led Lhermitte to continue painting scenes of rural France, many of which share the same name, “The Gleaners”.

Looking closely at the individual gleaners, they are each given some individual “character”. Rather than having plain smooth looking clothes like in Millet’s painting, Lhermitte opted for looser fitting shirts and added more detail to the faces of the women. The second woman reaching down has a pained expression on her face, showing the effort of reaching down all day. While the women in Millet’s painting share the same traits, the women in Lhermitte’s have different expressions. The two standing women each hold their bundle as if they are taking a small break, while the woman at the far end has her hand on her back and an exacerbated look on her face. This piece leaves the viewer without a sense of closure, as it seems the day is just beginning and a hard day of work is still ahead.