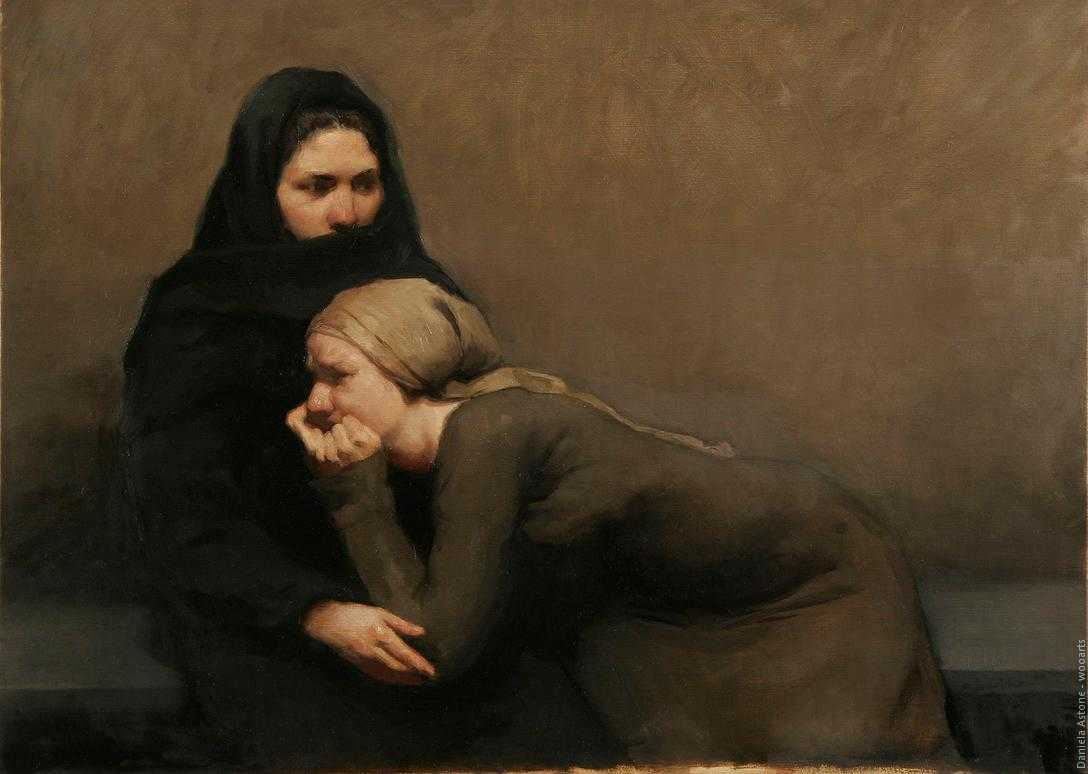 Daniela Astone ( b.1980 Pisa )grew upon in the sea-town of Porto Santo Stefano ,Italy, formally began studying art at the age of 14 in the High School of Arts in Grosseto.

After graduating in 1998 she moved to Florence to study Illustration at the international school of comix, in her second year she started to work independently for several editors and in the studio of illustration Ink Link.

At the age of 21 Daniela decided to change direction and to re-start studying drawing and paint from life at The Florence Academy of Art under the direction of Daniel Graves.

She began to teach to the younger students in the Academy when she was in her second year , she graduated in 2004 with the end of the year award , but she continued to work as a principal teacher for the Florence Academy of art .

In 2005 she had her first and very successful Solo show at the Ann Long Fine Art Gallery in Charleston so she decided to build up a studio in the Tuscany countryside.

In 2013 Daniela became the director of the intermediate program at The Florence Academy of Art , entered in the BP award in London and received a honorable mention from the Mod Portrait award,Spain .

Her work has exhibited internationally and in 2016 it became part of the permanent collection of MACS ,the Contemporary Art Museum in Sicily.

She also collaborated with Tiac ,China with Live And Learn ,Thailand ,with Streamline , East Oaks Studio and teaches workshops of landscape painting in her studio-house in Chianti Tuscany and around the world.

In 2019 together with Gaia Grazioli she curated the Show “Corpo a Corpo” in the Museum of Villa Bardini in Florence thanks to Cassa di Risparmio di Firenze and Carlo Sisi.

Daniela Astone was born in Pisa, Italy and raised in Porto Santo Stefano, in Maremma (Italy), a coastal town south of Florence. She discovered her passion for drawing and painting at a very young age, and began nourishing and cultivating her craft early on.
In 1998, after graduating from the High School for Visual Arts of Grosseto, she moved to Florence to study illustration at the International school of Comix.
Upon arriving, she first worked in illustration, then, in 2001, enrolled in The Florence Academy of Art, where she is now an instructor. In 2003, Daniela participated, as a student, in the exhibition, “Realism Revisited” at Panorama Museum, Bad Frankenhausen, Germany.

DO YOU WANT TO KNOW THE REAL SECRET TO CREATING ELEGANT STILL LIFE PAINTINGS?

Two decades ago, if you wanted to study the techniques of the Old Masters, you’d have found it almost impossible. Very few places existed that had documented and preserved their techniques, which had been passed from generation to generation but then were almost lost as the world became obsessed with modernism and abstract art. “Just express yourself, do your own thing,” was the mantra of the times. Those who wanted to study the figure and learn to paint like the Old Masters were told that the style was no longer valid, that they could never make a living.

Historically, the great artists understood the critical importance of training the next masters to carry on the traditions of those who came before them. Master painters would teach one or two primary students not only everything they had learned on their own, but what had been passed down from the masters’ own mentors. Six hundred years of knowledge preserved, along with generations of master painters’ improvements on the techniques they had learned.

In Florence, a thin thread connecting to the past existed — one that would carry ancient techniques forward to today. A lineage from the great masters, handed down one generation at a time, that has landed on the shoulders of a few men and women today. For 25 years, students at the Florence Academy have studied techniques as passed down from Signora Nerina Simi, daughter of Filadelfo Simi, who was a student of Gerome. One can trace this lineage back several hundred years, and it was Signora Simi who hand-picked a few exceptional students to carry it forward. One of those fortunate enough to carry the responsibility for maintaining those techniques was Daniel Graves, an American who studied in Florence and who founded the Florence Academy, now one of the most renowned art institutions in the world.

Like those before him, Graves has trained and selected a few from a younger generation to carry these techniques forward. One of those people is a young Italian woman, Daniela Astone.

Though Daniela Astone started her art education on a typical track, her passion eventually landed her acceptance into the Florence Academy. She went through the entire program, but, unlike those who graduated and moved on, she wanted to carry that program on to future generations. So she was trained personally by the instructors at the school, including Daniel Graves.

Today, Daniela Astone plays a major role in training students at the Florence Academy. In 2013, she won the BP Portrait Award, and her self-portrait now hangs in the National Portrait Gallery in London.

While filming Daniel Graves in Florence, we fell in love with Astone’s incredible ability to create elegant still life paintings. We immediately made special arrangements to film her technique as well.