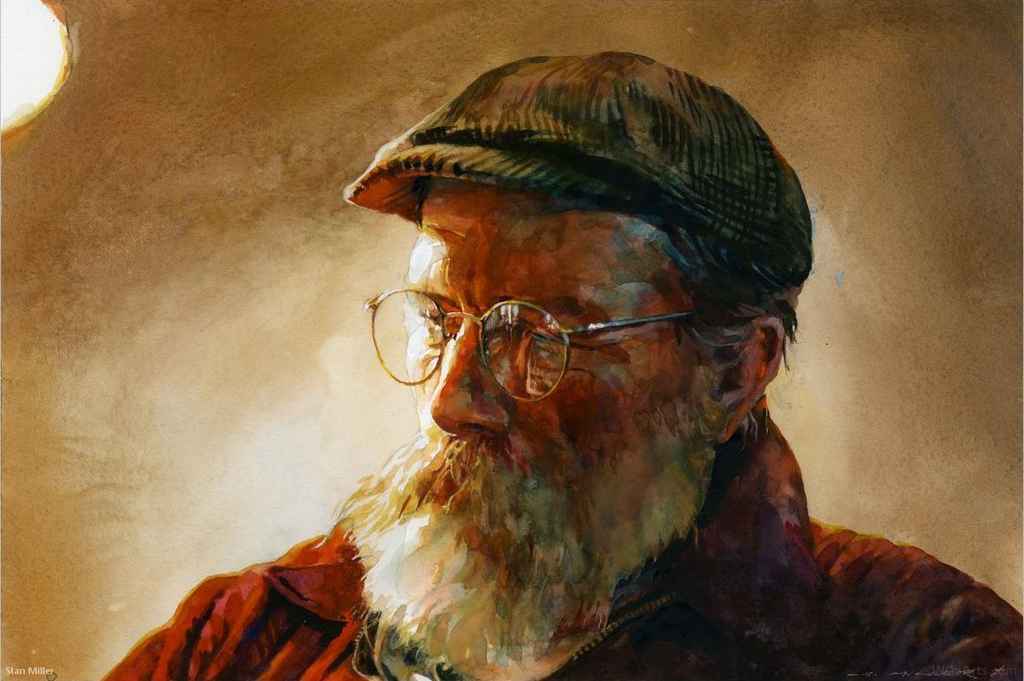 The Paintings Of Stan Miller

Stan Miller has been a professional painter in watercolor and egg tempera for more than thirty years. The artist has exhibited his paintings in numerous exhibitions, galleries and museums.A signature member of the American Watercolor Society as well as an AWS award winner, Stan Miller also teaches workshops and classes in Spokane, the United States and around the world.

I was born on a small farm in Southeastern South Dakota in 1949. We lived about 50 miles from Sioux Falls. I was one of seven children, three brothers and three sisters. When I was seven, we moved to Sioux Falls where my dad got a job as a mechanic for Caterpillar.

When I was fifteen our family moved to Spokane,Washington, where I finished my high school education and graduated in 1967. I went on to college and graduated from Spokane Falls Community College in 1973, with an Applied Arts Degree and a Commercial Art Degree. Other than two years in Pennsylvania, I have continued to live in Spokane since my graduation from college.

I remember, when I must have been quite young, watching my older brother Greg draw. He was good. In the third grade our teacher taught us perspective, how to make a road go back and disappear into the mountains. I never forgot how to do that.

When I was seven or eight years old, our family took a trip to Wisconsin to visit a friend of my Dads. He was a professional watercolorist. I remember the drive through the woods, walking up to his front door, through the entry, looking up at the walls as soon as I entered the house. I wanted to see his paintings. Randy Penner.

I’ll never forget that name or that trip and the influence it had on me.

In Junior High I took some art, mechanical drawing and enjoyed it. I wrote a career paper on becoming an artist but never really thought that it was possible. In college I decided to major in physical education since I considered an art major unrealistic.

The second year I switched to a commercial art major since the community college had a good graphics program. It was during the three years of training to become a commercial artist that I took watercolor.

My first watercolor class I got a “C”. The worst grade I had ever received in any art class. I was required to take it again the following year and it went much better. Not only did I get an “A”, but I fell in love with it.

I started selling my paintings before I graduated for as little as $2. In the fall of 1973 I had made a decision to try to make a living as a full time, professional watercolorist and have managed to do that now for more than thirty years.

(one of seven award winners in this international competition)