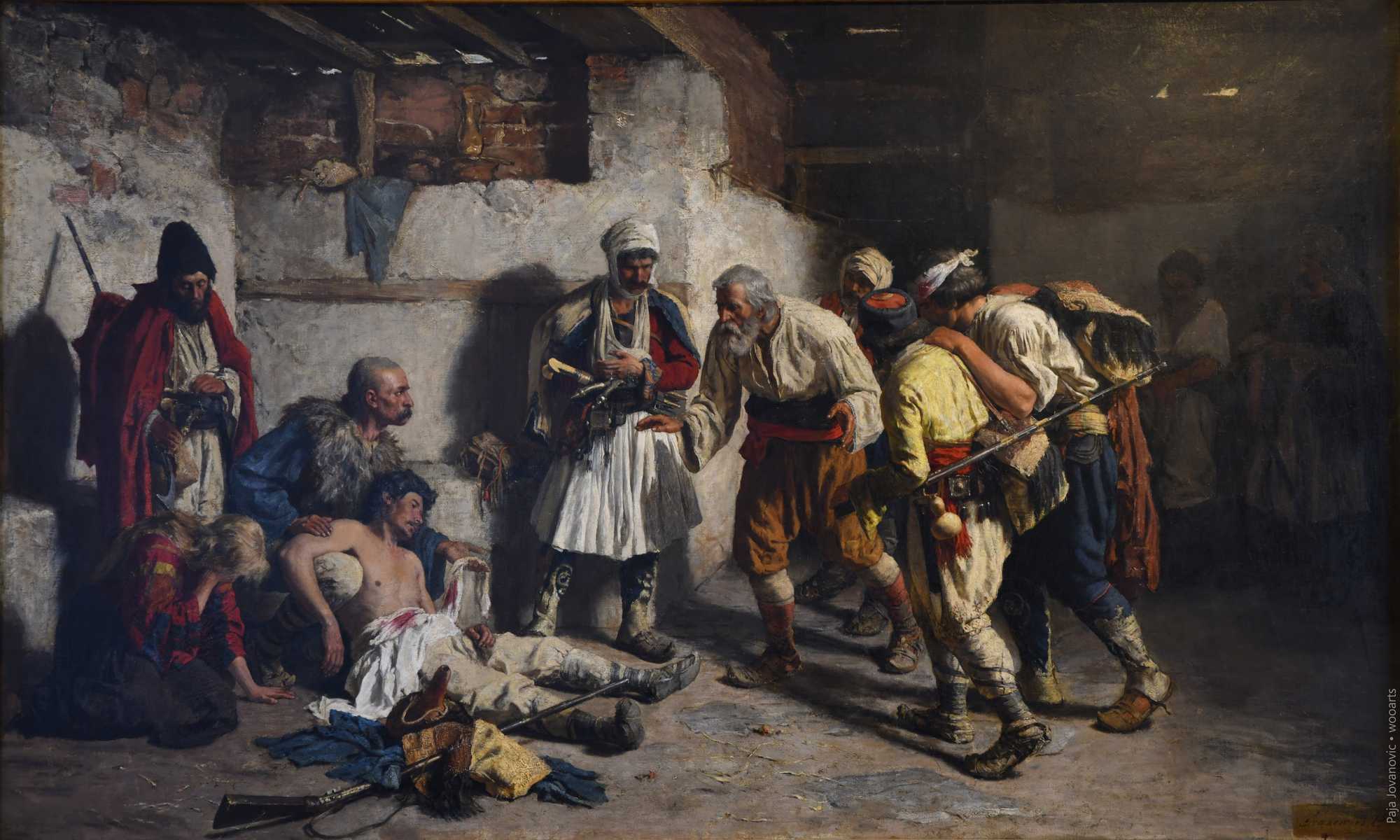 Pavle “Paja” Jovanović was a Serbian painter who painted more than 1,100 works including: The Wounded Montenegrin, Decorating of the Bride and Migration of the Serbs. Paja was also the premier portraitist of Europe after 1905, he painted the Emperor Franz Joseph I of Austria over 14 times, he painted royalty, major industrialists, scientists, bankers, oil barons and monopolists, including certain heirs to the Standard Oil fortune in the United States of America.

A realist inspired by Serbian history and everyday life of the people, painter Pavle Paja Jovanović (1859-1957) made a significant influence on education, culture and patriotism of his nation.

There are a few painters who can boast with the fact that at the age of fourteen they were commissioned to paint a significant piece like Serbian painter Pavle Paja Jovanović was.

Church municipality in the town of Vršac, where he lived, decided to ask him to paint the saints for new bells in Saborna church. Hence Paja as a teenager got his first commission and at the same time a sort of a pass for the Academy of Fine Arts in Vienna.

After lyceum, he enrolled at the Academy of Fine Arts in the class of the professor Christian Griepenkerl, esteemed painter and educationalist. He finished his studies in three years, but he continued his education with the same professor, in a special course for historic painting.

At the same time he attended several important courses taught by Leopold Carl Müller, at the time a very popular and celebrated painter of historic and genre painting, who was particularly known for his paintings with oriental motifs, especially from Egypt. Soon Paja became his best student.

Paja Jovanović found inspiration for his works in numerous travels. As a student he travelled to Montenegro, costal lands, Albania, Bosnia and Herzegovina, Southern and Eastern Serbia. On his travels he made sketches of everyday life and customs. He made detailed notes about landscapes, characters, folk costumes, jewelry, and arms.

Full of impressions he created: “Wounded Montenegrin” (for this painting he got the imperial scholarship), “Guslar”, “Decorating Bride”, “Arnaut with čibuk”, “Cockfighting”… These paintings made Paja Jovanović famous around the world, especially in Europe that was more than interested in the Balkans at that time.

From 1895 Paja Jovanović painted historical compositions and the same year he got two significant commissions for the Millenium exhibition in Budapest. Serbian patriarch Georgije Branković commissioned him to paint a monumental historical composition “Serb Migrations” under patriarch Arsenije III Čarnojević. The other commission was made by the town of Vršac to paint “Triptych”. After a long scientific research and travels and ten months of hard work, the painter was satisfied, but not the patriarch.

Due to his complaints and remarks, mainly of political character, the “Serb Migrations” painting wasn’t exhibited at the Millennium exhibition, instead they exhibited “The Vršac triptych”: “Mowing”, “Harvest”, “Market”, that was seen as the expression of good relations between Serbs, Hungarians and Germans.

After 1905 Paja Jovanović devoted himself exclusively to painting the portraits. He painted numerous rulers, politicians, aristocrats, scientists, artists, and above all he liked to paint female characters, because, according to him, he was painting beauty.

Paja Jovanović is one of the most important figures in the history of Serbian painting, and a classical representative of academic realism. His monumental work, especially the topics displaying life of people and historic scenes, had great influence on art, culture and patriotism of our nation.

Paja Jovanović (16 June 1859 – 30 November 1957) was a Serbian Realist painter. He is considered one of Serbia’s greatest academic painters. His most famous and recognizable paintings are The Migration of Serbs, the Crowning of Stefan Dušan, The Uprising at Takovo, Cockfighting, Decorating of the Bride, and the Fencing Lesson. He also painted many famous portraits. While many of his works can be seen in many European museums across the continent some have been lost, like Furor Teutonicus, a monumental oil on canvas depicting Battle of the Teutoburg Forest.

The public and many art critics directed their attention to the young painter, and in 1883 he signed a contract with the London gallery simply named “French”. He continued his travelling through Caucasus, Morocco, Egypt, Greece, Turkey, Italy, and Spain. A great number of sketches, notes, and studies, along with the collected objects from the life of the common people, will find their place in his famous genre-compositions, such as: Fencing, Decorating of the Bride, and Cockfighting.

Some of Jovanović’s most remarkable praises were gathered at two of his greatest exhibitions: Millennium exhibition in Budapest in 1896, where he prepared Migration of Serbs for entry, but Triptych was sent instead, and the World Exhibition in Paris in 1900, for which he had painted a great historical composition The Proclamation of Dušan’s Law. As early as in 1893 he was proclaimed for the member of the Serbian Royal Academy. He was given the task to make the monumental, historical compositions. After 1905 he devoted himself exclusively to painting the portraits in the style of academic realism for the rich clientele, and he became very famous thanks to them. Some of the most famous include Portrait of the Painter Simington, Portrait of Mihajlo Pupin, Portrait of the Artist’s Wife Muni, Portrait of the Sculptor Đoka Jovanović, and others.

He painted the portraits of his longtime model and wife, Muni with special care. He made the iconostasis in the church in Dolovo and Saborna church in Novi Sad, which was painted without commission. He spent most of his time in his atelier in Vienna where he settled, and occasionally travelled to Belgrade. In 1940 he was given the title of the honorary citizen of Vršac, and in 1949 he was given the Merit for People of the first category.

He lived quietly and lonely, after his wife’s early death, in Vienna until his own death in 1957. According to his will, the urn with his ashes was to be moved to Belgrade and where “The Legacy of Paja Jovanović” was opened in 1970, as well in Vršac. Later, in the building of the Old Pharmacy on the Stairs, in 1977 the permanent commemorative exhibition of Paja Jovanović was opened. The works of Paja Jovanović have been kept in the Town Museum of Vršac, along with the exceptionally famous Vršac Triptych. Most of his works and personal belongings can be found in the Town Museum of Belgrade.

Paja Jovanovic - decorating of the bride

Paja Jovanovic - A Nude on a Red Cloak (Mouni)

Paja Jovanovic - Flowers in a Vase

Paja Jovanovic - Portrait of a Lady by a Fireplace

Paja Jovanovic - Portrait of a Young Woman in a Pink Dress