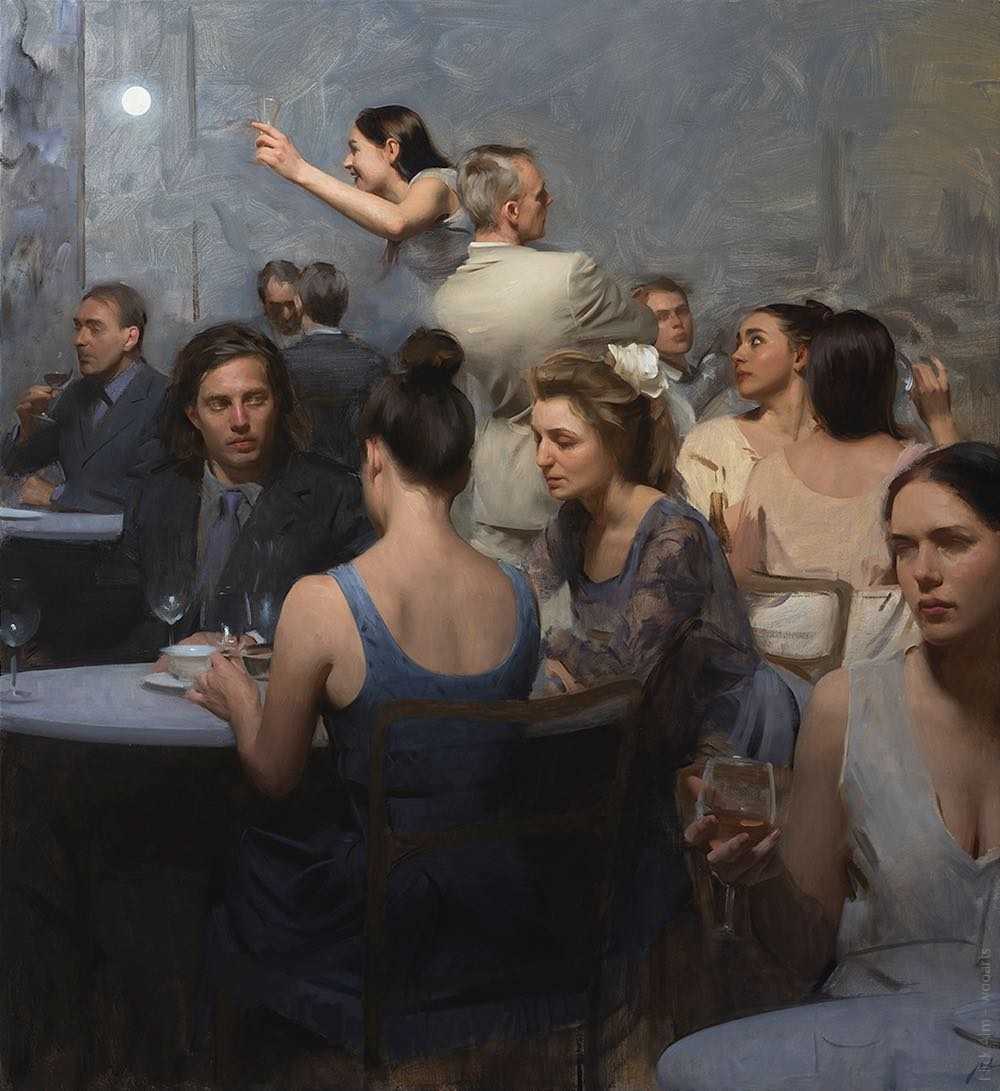 Nick Alm was born 1985 in Eksjö, Sweden. In 2007 he entered the Florence Academy of Art, where he also held a position as teaching assistant. After graduating in 2010, he received a scholarship to join The Hudson River Fellowship. The following year, he studied with the Norwegian painter Odd Nerdrum in Norway and in France before returning to Sweden. At present he has his studio in Stockholm.

Nick Alm has received several honors and awards. He exhibited in The Portrait Society of America in Philadelphia in 2012, where he was awarded the Exceptional Merit Award. In 2013, he won the First Place Prize in ARC’s International Salon, followed by the William Bouguereau Award. In 2017, he was awarded the TIAC Art Price and the Purchase Price of the International ARC Salon.

What I aim for as a painter is to make my artwork vibrant with life. The human figure has always been at the center of my work which I try to capture with a great sense of light, atmosphere and texture. I prefer to work directly from life instead of using a camera.

A photograph is just an interpretation of life that lacks the subtle colour and value shifts and the interesting changes in nature. Instead of copying the object in front of me, I simplify, rearrange and add my own vision.

My main source of inspiration comes from the contemporary world around me. I aim to communicate what is inherently and universally human, transcending cultural codes and specific trends. I interpret whatever awakens me to something extra in my surroundings, from the context itself to the details, the psychological tension between people, a state of mind, a mood or an opportunity to express painterly joy.

It’s not my goal to criticize or change society; instead my work addresses itself primarily to the inner world of the individual. Hopefully my work will offer the viewer a break from everyday life, evoking a sense of recognition that leads to a moment of reflection, or perhaps inciting a creative urge.

Born in Sweden 1985. Lives and works in Stockholm.

Many Impressionists such as Monet and Renoir explored the subtleties of human body language in their portrayals of mirthful social gatherings. Contemporary artist Nick Alm continues the tradition in his recent series of paintings that observe ambivalent figures mingling in modern settings.

The Swedish artist often draws from live models to create a familiar atmosphere. Sometimes his wistful figures engage with one another, while in other cases they appear listless in their surroundings. “The general aim of my art is visual interest based on abstract shapes, brushwork, color and value relationships, and a sense of light,” Alm explains to My Modern Met. “It should always be a subjective interpretation of reality—a more or less subtle deviation from realism.”

In contrast to the realistic rendering of the figures, Alm uses watery, expressive brushstrokes to define the backgrounds, which range from restaurants and bars to outdoor patios. This stylistic choice brings these ordinary scenes into a contemplative space—emphasizing the emotional currents that connect the group of people.

Although his art is grounded in contemporary life, the dreamy brushstrokes and airy palette place the paintings in a timeless plane. Alm’s keen understanding of human body language and latent emotion shines through each canvas, making them universally relatable.

Scroll down to see more stunning paintings by Alm, and follow the artist on Instagram to keep up to date with his latest creations.

He uses a combination of precise and water brushstrokes to portray a dreamy atmosphere.

Nick Alm, Painter, Winner of TIAC Art Prize 2018
This year The International Arts & Culture Group has been invited by Art Renewal Center to be part of Art Renewal Center’s 13th International ARC Salon Competition. to introduce and give the TIAC Art Prize. The winners were the painter Nick Alm for his painting Ruset and the sculpters Coderch & Malavia Sculptors for the piece The Tissue of Time. The winners where selected by the leading members of TIAC, the artists Lynn Guo, Qin Chuan, Scott Breton, Zhang Meng , and Shi Yu Liu.

“We chose a painting and a sculpture that we felt exemplified the integration of fluent and powerful technical means with a theme that could resonate with a contemporary audience, and produce an iconic image, aesthetically and thematically.”
— Scott Breton, TIAC Co-Founder
We’ve asked the artists to talk about themselves to present them to our community.

How did your love for art begin and why?
I’ve always been into drawing for as long as I can remember. Why? We’re all born with inclinations. Visiting the Gothenburg Museum had a big impact on me and encouraged me to start painting in oil.

Why painting? What makes this particular medium special to you?
The brushstrokes and the texture foremost. Also, the medium gives you both freedom and control.

Which have been the most satisfying moments of your career and why?
I´ve got no particular moment, but all awards have been welcomed. Selling out my first solo show was also a blast.

On the other hand, the toughest struggles?
Poor painting days. Also I had a back injury that tortured me for almost a year.

Where does your inspiration come from?
From an accumulated memory bank, sometimes in alliance with new impressions.

It´s a process that usually is hard to put words on.

How is your creative process? What do you enjoy most? What less?
The creative process varies, but it mainly involves small thumbnail sketches with pencil and paper and experiments in photoshop.
The first vision is quite a dopamine kick, and seeing the picture come to life has some magic in it. It´s rarely a walk in the park though. I often get stuck with the composition, not knowing how to solve the problem. However, it´s worse to discover a problem once the picture is already painted.

Your paintings depict scenes of what it could be interpret as a Dionysian feast, full of characters and stories, could you tell us more about this?
My appreciation for the theme has little to do with the mythology, but the theme is so full of potential. That´s why I´m drawn to it.

“Ruset” was TIAC’s favorite this year. Could you talk about it?
While working with a model for another painting she all of a sudden stroke this expressive pose, a pose that was telling a story. I placed her in a somewhat undefined restaurant in an unspecific time. More models were then brought in, one at the time, to add interest and context. The composition was most of the time a consuming part of the process. Painting took approximately between 1-2 weeks, but the process from the idea to the finished product took about two years. Though most of the surrounding is imaginative, one of the paintings in the background is a part of an album cover by Slayer.

trying to imagine a parallel reality, who would Nick Alm be without Art?
Maybe a musician. I would have to channel the creativity somehow.

If you knew that thanks to your Art you have the power to change something in the world, what would you change?
Peoples sense of aesthetics.

Any particular message you’d like to leave us?
Thank you!