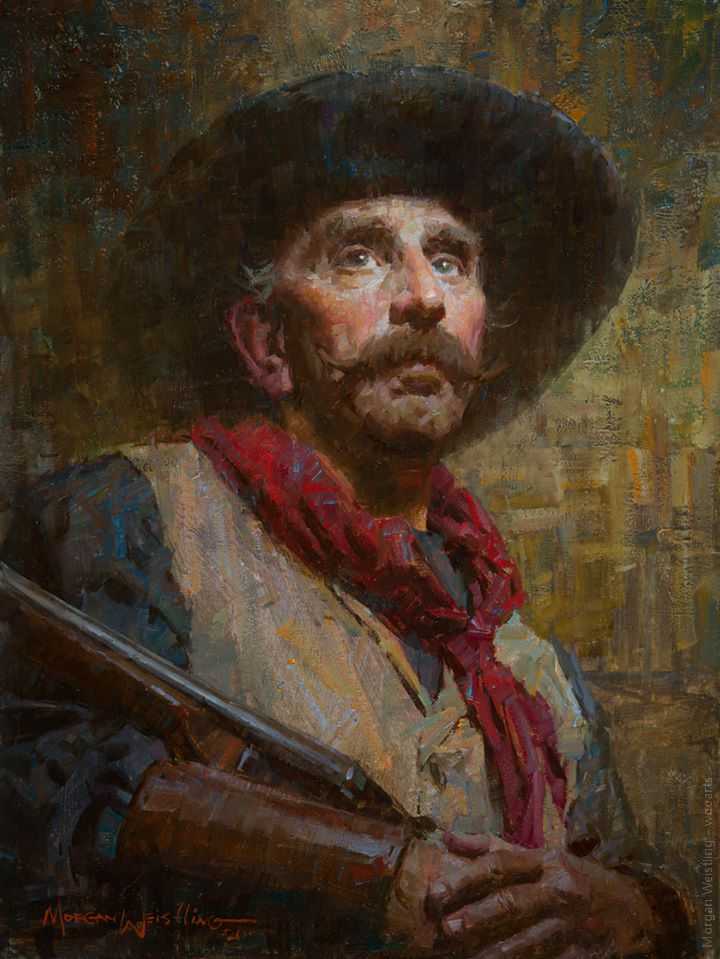 Morgan Weistling is nationally recognized as one of America’s top contemporary painters today. A successful illustrator in the Hollywood movie industry for fourteen years, Weistling made a transition to the world of fine art in 1998 that has been meteoric in so small sense of the word. His earliest influence was his artist father on whose lap Morgan sat and sketched at just nineteen months of age. At the age of 15, he began his serious art training in the Los Angeles area at Brandes Art Institute, run by Fred Fixler. Fixler was train classically by famed muralist , Frank Reilly. Under Fixler’s tutelage, Weistling learned to paint by studying how light and tone tell the story of form.

Interviewed for an article in “Art of the West” magazine, Weistling recalls, “Fixler used classical methods and still taught the rigorous approach. Great draftsmanship is the root of all great art. That’s how he trained me. Other major influences in Morgan’s work include John Singer Sargent, Anders Zorn, Nicolai Fechin, Joaquin Sorolla, and illustrators of the Golden Age of Illustration .

Weistling was recruited out of art school by the top advertising agency in Hollywood , Bacon Reneric Design, at the age of 19. For 14 years he created movie posters with every major studio in the entertainment business. Morgan thrived under the challenges presented to him in the highly stressed poster industry but was looking forward to a time when he could stretch himself more artistically.

After leaving illustration, Morgan soon became known nationally for his exquisite oil paintings that showcase his well honed drawing ability and his skilled control over values, edges and light. He is able to draw upon his many years as a illustrator to create masterful compositions with multiple figures as well as single figure settings. Most often, his subjects are period pieces, evoking a more gentle, gracious time. He captures the mood and atmosphere of the past and his attention to the historical aspects of his subjects comes from his desire to portray the truth and beauty of America’s pioneering spirit. His paintings have a deep sense of history to them due to the his research and authentic costumes that he has specially made for him.

Morgan notes, “In my paintings, I hope to communicate with the viewer the same emotional response that I felt and was inspired by. There has to be something visually stunning in the scene that causes me to want to capture that. Sometimes it is the personality of my model and a particular pose that just begs to be painted. Other times it’s just the way a particular edge stands out among the softer ones around it. Whatever it is, I know it must come from my heart or I won’t stay interested nor will the viewer.”

His canvases are filled with brushwork that tell a story beyond the subject matter. Like a skilled movie director , he manipulates the focus of interest with just suggestions and impressions of forms that are barely realized and allow the viewer’s imagination to fill in the details. There is a story underneath the story of my paintings, Morgan adds,” I don’t hide the process of how I painted it. You can see the layers and count the strokes it took to get there.

While collector demand for his original paintings has soared, the paintings that leave his studio are few and far between. Morgan acknowledges, “I am not the most prolific painter around! I decided early on that I would not let a painting out of the studio unless I feel really good about it. Sometimes that means living with a painting for a few months to get a good sense of what is working or not working. I think we as artists can become blind to our errors, which is why I rely on my wife JoAnn, as well as other artist friends, to critique each piece before I send it out. I think it is a valuable asset for an artist to surround himself with people willing to give an honest opinion.

Weistling’s paintings have won multiple awards and been purchased for permanent display by major museums. He is still the youngest to ever win the coveted Prix de West Award at the National Cowboy and Western Heritage Museum in Oklahoma City. He also went on to win it a second time in 2008.

Also interested in depicting his Christian faith, Morgan has portrayed the life of Christ in many of his paintings. Those images can be found in the best selling book, The Image of Christ, with paintings and text by Morgan.

Morgan has been equally successful in the print market for 17 years. With numerous sold out editions of his work, he name has become instantly recognizable in the world of limited editions. His work is published by Fine Art Publishing.