Dame Laura Knight, (née Johnson), DBE RA RWS (4 August 1877 – 7 July 1970) was an English artist who worked in oils, watercolours, etching, engraving and drypoint. Knight was a painter in the figurative, realist tradition and who embraced English Impressionism. In her long career, Knight was among the most successful and popular painters in Britain. Her success in the male-dominated British art establishment paved the way for greater status and recognition for women artists.
In 1929, she was created a Dame, and in 1936 became the first woman elected to full membership of the Royal Academy since its foundation in 1768. Her large retrospective exhibition at the Royal Academy in 1965 was the first for a woman. Knight was known for painting amidst the world of the theatre and ballet in London, and for being a war artist during the Second World War. She was also greatly interested in, and inspired by, marginalised communities and individuals, including Gypsies and circus performers.

Dame Laura Knight and the nude controversy
By Kathryn Hughes 7:05AM BST 11 Jul 2013

Yet for many people it was a breath of fresh air, a graphic declaration that women artists were entitled to paint on the same terms as men. It certainly made Knight a star.

In 1929 she became ‘Dame Laura’ and, in 1936, was elected a full member of the Royal Academy, the first woman to receive the honour. Her paintings sold to museums and collectors worldwide, turning her into a household name.

And yet there was nothing safe or calculated about Knight’s art.

Throughout her 50-year career she continued to search out subjects that were somehow off-kilter: backstage ballet dancers, circus performers, gipsies and tramps. Later, in an effort to get to grips with the wickedness of Nazi Germany, she produced her famous visual account of the Nuremberg war trials.

Next week many of these paintings will be celebrated at a show at the National Portrait Gallery, ‘Laura Knight Portraits’. Her life is also remembered in the film Summer in February, starring Dan Stevens, which explores the artists’ colony in Newlyn, Cornwall, where Knight emerged as one of the most interesting painters of the early 20th century.

Knight later described the 1909-1919 period she spent in Cornwall as a time of ‘sunlight pleasure’. It was certainly a stark contrast to the grind of her early years.

Born in 1877, she was raised in an impoverished middle-class Nottingham family. An air of genteel poverty never left her – decades later, and by then comfortably off, she was presented to the Prince of Wales and famously insisted on taking the bus home.

There were other challenges too. Arriving at the Nottingham School of Art in 1899 – on a scholarship at the unusually early age of 13 – Knight was brought up sharply against the limited opportunities available to women students.

While her male classmates were urged to look closely at the nude models in the life-drawing classes, Knight was excluded, left to find out about the body by poring over plaster casts, a disadvantage she believed marred her work for decades.

The most talented of the young men at Nottingham was Harold Knight, whom Laura later admitted pursuing simply in order to enjoy some proper ‘man-talks’ about art. Friends at first, they married in 1903, and spent their honeymoon visiting the National Gallery every day.

But it was four years later, when the pair moved to the Cornish coast, that Laura’s work really caught fire.

There, at Newlyn, she found herself living and painting alongside some of the most exciting painters of the day, including Lamorna Birch and Alfred Munnings, who was gaining a reputation as the bad boy of British Art.

The Newlyn artists posed for one another on the beach, critiqued each other’s work and spent the long Cornish evenings in the tiny village pub. Soaking up this bracing atmosphere, Knight shed her early shyness and found a style that was entirely her own.

The Green Feather (1911) shows Dolly Snell, a professional dancer with ‘a Mona Lisa expression’, standing proud against a serene country sky. Dressed in one of Laura’s homemade evening dresses topped with Harold’s old jacket, Dolly manages to look as magnificent as a swaggering 18th-century aristocrat in a portrait by Gainsborough.

Completed in just a day, The Green Feather was snapped up by the National Gallery of Canada for £400, allowing Knight to relax after years of scrimping: ‘I could sell nearly everything I touched, an exhilarating experience.’

Having seen out the First World War in Cornwall (Harold had registered as a conscientious objector) the Knights returned to London in 1919. Laura began to seek out new subjects among the artistic avant-garde.

Like many painters of her generation, including Picasso and Matisse, she was captivated by the wild glamour of the Ballets Russes, Diaghilev’s dance company, which made several sensational visits to Britain.

Unlike her male contemporaries, though, Knight was drawn to contemplative moments rather than the full-on performance.

In 1919 she painted the prima ballerina Lydia Lopokova in her dressing-room, sketching furiously as the diminutive dancer prepared for her role as the dancing doll in La Boutique fantasque.

‘We were both workers,’ Knight recalled. ‘There was to be no conversation; it was to be as if I did not exist’.

Intensely curious about other people, Knight was drawn to painting women who, like her, were breaking new creative ground.

In 1924 she caught actress Gwen Ffrangon-Davies in a dressing-room moment as she fixed her flame-coloured hair prior to stepping out on stage as Juliet opposite John Gielgud’s Romeo. This was followed by a stunning portrait of Ethel Bartlett, a classical pianist whose ‘simple lines of beauty took me by storm’.

Knight, though, did much more than show her friend as a beautiful woman in a fashionable frock. By concentrating on her powerful arms and delicate hands, she drew attention to the years of training and skill Bartlett had invested in her career.

Shown at the Royal Academy’s Summer Exhibition of 1926, Ethel Bartlett confirmed Knight as the country’s pre-eminent painter of women, a stamp of approval that freed her to take risks.

That year she went to Baltimore with Harold and obtained permission to paint in the racially segregated maternity wards of John Hopkins hospital.

One of the most stunning results was a portrait of Pearl Johnson, a long-serving John Hopkins nurse who soon became a friend. An energetic campaigner against segregation, Johnson took Knight to lectures and concerts to observe this early phase of the Civil Rights movement.

Not everyone was a fan. Kenneth Clark sneered that Knight’s art had a ‘commonplaceness’, referring to Knight’s training at Nottingham, where, by her own admission, the great European currents including Post-Impressionism had passed her by.

As younger British artists moved increasingly towards abstract forms, Knight continued to paint in the realist tradition. Her rigorous figurative approach was designed to bring unusual or overlooked subjects before the British public.

Nowhere was this purpose more apparent than in the work Knight undertook during the Second World War.

Working for the War Artists Advisory Committee, she was commissioned to paint portraits of the women and men who had demonstrated exceptional courage in the face of the enemy.

Corporal Elspeth Henderson and Sergeant Helen Turner celebrates two young women in the Women’s Auxiliary Air Force who were awarded the Military Medal for Bravery in recognition of the way they had stayed at their posts after their building received a direct hit.

Soon after Knight produced what has since become one of her most famous paintings, Ruby Loftus Screwing a Breech-Ring, which celebrates the skill of the factory hand Ruby, who helped make the guns that were so vital for the war effort.

Knight drew on her experience of painting ballet dancers and musicians to present Ruby as an athlete, her body carefully poised as she operates her lathe as if playing an exquisite instrument.

It was characteristic of Knight that she protested about the ‘paltry’ fees she was paid for her war paintings. Insistent that artists, especially female artists, should get a proper rate for their work, she had no embarrassment about haggling.

But for one particular commission there was no need to lure her with cash. Although nearly 70, she asked to be allowed to travel to Nuremberg to paint the historic trial at which Nazi leaders were to answer for their war crimes.

Here was a side of war very different from the heroism she had celebrated in her portraits of British service women and factory workers. Knight had expressed her ambivalence about spending the previous four years ‘picturing the making of instruments to kill’.

Now she wanted to find out the full horror of what war had meant for thousands of ordinary Europeans.

For once Knight abandoned her strictly realistic approach. Deeply disturbed by what she heard at the testimony, she painted a group portrait of prisoners including Göring, Hess and Speer floating above a landscape of urban desolation, like a vivid nightmare.

Coolly received at the time, the painting has since been recognised as one of the most powerful depictions of war ever produced.

The young girl excluded from the life class in Nottingham all those years ago had proved, once and for all, that there was no limit to the subjects that women artists could tackle.

‘Laura Knight Portraits’ is at the National Portrait Gallery, London WC2 (npg.org.uk) from 11 July to 13 October 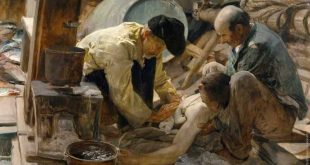