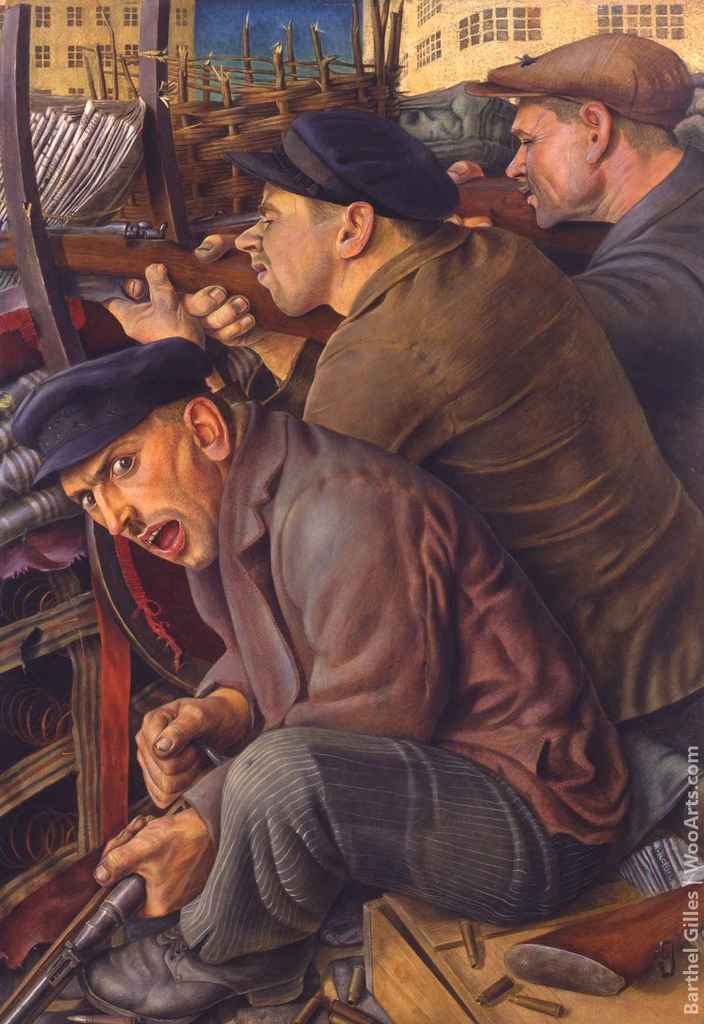 In the course of his artistic work, the painter Barthel Gilles, who lived in Cologne, experimented repeatedly with different painting techniques and styles. Influenced by studying the “Kölner Malerschule” and other masters of the 15th and 16th century, he predominantly carried out his works in a meticulous glazing technique with egg tempera on panel (cf. Eva Krabbe/Adam C. Oellers, Barthel Gilles, ein Maler der Neuen Sachlichkeit, Aachen 1982, p. 7 ff.).

A specific Rhenish characteristic of New Objectivity is evident in Gilles’ works: “The Cologne members of New Objectivity tend towards a classicistic direction which is surely also attributed to the genius loci, a Rhenish artistic tradition with a strong influence originating from the Middle Ages.” (cited from: Oellers/Euler-Schmidt, p. 46)

From 1937 onwards, Gilles revives his New Objectivist period and repeatedly takes up religious subjects again. The present portrait of a girl, executed in highly technical mastery as a half-length portrait, is partially derived from Christian iconography and features references to typical portraits of the Virgin Mary.

The painting can be distinguished by its particular attention to detail which is deliberately reminiscent of medieval portraits. Despite the young woman’s timid and sweet gaze, the portrait is able to evoke an uncertainty in the observer typical of the painting of the New Objectivity and which is emphasised by the dissonant triad of the colours lemon yellow, blue-green and orange.

Egg tempera on fibreboard. 49.9 x 40.7 cm. Framed under glass. Signed and dated ‘B. Gilles 1937′ in yellow lower left. – Minor rubbing to the margins due to framing, occasional minimal loss of colour to edges.

Provenance
Acquired directly from the artist by the former owner; Private possession, Rhineland-Palatinate

In Ruhrkampf, the artist portrayed a battle that took place ten years earlier in the Ruhr industrial area between radical workers and the regular army and police. The workers had been on strike and were suffering terrible repression – they eventually turned to arms for self defense.

Fighting soon broke out with the authorities and escalated to civil war proportions. The workers were defeated by the army and police only after hundreds of workers had been killed. Gilles’ painting reveals a little known truth, that many Germans resisted the rise of the right, and the years leading up to Hitler’s rule were ones of intense conflict.

Gilles was a member of the German Communist Party (KPD) and during the Nazi era was prohibited from painting or exhibiting his work publicly. Though an obscure and little known artist today, Gilles was a master of the difficult medium of egg tempera. His dynamic and realistic Ruhr Struggle was such a painting done on wood.

Barthel Gilles studied at the Industrial School of Cologne to become a decorative painter. During this time he created his first autodidact paintings. He continued his studies at the Düsseldorf Art Academy (1909-11) and was called into military service from 1914 to 1918 where he was wounded.

He then settled down in Cologne and became part of a Düsseldorf artist group as well as the Ausstellungs-Gemeinschaft Kölner Maler. After having initially used expressionist color and brushwork, his works of the 1920s show a clear orientation towards New Objectivity. Gilles created portraits, landscapes and genre paintings, later also religious themes.

Formally, he took up the traditions of the old German masters and the Pre-Raphaelites, whereby he used wood as painting support. He travelled Europe extensively from Spain to Scandinavia. A selection of his works are owned by the Suermondt-Ludwig-Museum in Aachen.