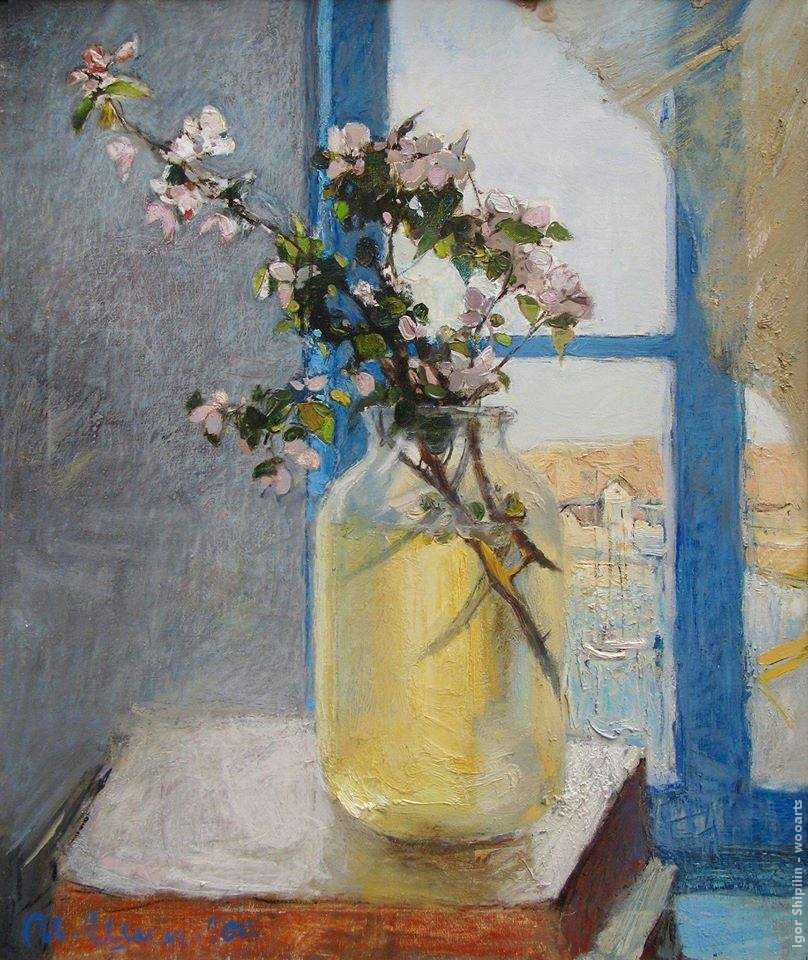 Igor Shipilin (Shipilin Igor Nikolayevich) was born in 1961 in Crimea, Sevastopol. After finishing the elementary school he chose his further education to be directed towards art and painting. He graduated from Sevastopol Children’s Art School in 1977. He continued his studies at The Repin Institute in Leningrad (now St. Petersburg) and at The Moscow State Academy of Printing, where he graduated in 1999.

Nowadays he is considered to be one of the leading contemporary landscape masters of the region. His paintings represent the romance of Crimean landscape, contemplative scenes of historical significance and nature. Crimea that Shipilin is masterfully looking to show us is obviously real, but at the same time poeticized by the artist. There are no dramatic conflicts or psychological bursts, sometimes even sounding of sad notes of nostalgia. The picturesque old curvature of the Crimean streets, chaotic jumble of buildings, covered tiled roofs, balconies, staircases, passages through which to view the sky, the sea – themselves suggest the artist’s perspective, the point of the horizon and finally, composition in accordance with the best tradition of the Crimean school of Academical Art.

Shipilin is an active and respected member in the Crimean art scene – the chairman of the regional artist’s union in Sevastopol, holds a diploma merited by the Russian Academy of Art, and has a title of an Honored artist of Crimea. He is an active member of his local art scene, both as a leader, a mentor and an artist, having founded the “League of watercolors of Crimea” in 2001. He has been exhibiting actively since 1989, including a series of exhibitions in London.

He is the member of the National Artists’ Union of Ukraine since 1994.

Painter, schedule. Master of landscape and still life. In 1977 he graduated from the Sevastopol children’s art school. Teachers – M.Kobylenkov, T.Mazharova, S.Arefieva, N.Ksenofontov. In 1999 he graduated from the Moscow State Academy of Press. Since 2001 – the organizer of the “League of watercolorists of the Crimea.” Shipilin I.N. Member of the National Union of Artists of Ukraine since 1994. In 2004-2009 – Member of the All-Ukrainian “Sevastopol open-air”. In 2007-2009 – Chairman of the Board of the Sevastopol organization NSHU. Solo exhibitions were held in the Sevastopol Art Museum (1992, 1996, 2001, 2006). The main subject of the work is the lyrical Crimean landscape. Freely owning a drawing, composition, color, the artist transfers onto the canvas his admiration for the romance of the Crimean antiquity through the modern sense of the world. The works of Igor Nikolaevich Shipilina are in museums and private collections in Ukraine and beyond its borders. He lives and works in Sevastopol.

Shipilin artworks are held in The Hermitage Museum in St. Petersburg, Sevastopol Art Museum of M.P. Kroshitsky, Simferopol State Art Museum, and as well in private collections all over the world.

Al Maqtaa Fort is 200 years old and was built to defend the island against bandits. This week, it is the subject of a week-long masterclass being conducted by Igor Shipilin, an artist from Crimea, whose works are displayed in the most prestigious museums of Russia: the Hermitage in St Petersburg and the Moscow Museum of Modern Art.

Shipilin, who currently has a solo show at N2N Gallery in Nation Towers Galleria, paints in the style of the modern masters. At home in Crimea, he is accustomed to sitting in the open air and painting straight onto the canvas with oil paint.

“Russian artists are the only ones that still paint like this,” he says. “French impressionists started this tradition but it is dying now – most people work in a studio.”

A total of 16 participants signed up for his masterclass, which started on Friday and ends on Thursday. “The idea is to observe how we see the light and shadow and the relationship between vertical and horizontal lines and between the cold and warm colours,” he explains. “In the end, I will teach them how to create a living painting.”

The biggest challenge, he says, is to put across how he feels and how he sees.

“There are many people who draw and paint landscapes, but often it is just a scene. Landscape is a philosophical understanding, you have to hear it, smell it and feel it and then you can really paint a landscape.”

The participants in the masterclass range from beginners to professional artists.

Iwona Drozd, 56, from Poland, has never painted before, but says she feels lucky to have such a good teacher.

“Igor is an excellent painter and a really good teacher, he has shown us everything step by step, how to make the painting. I am a journalist and I write books for which I always work with an illustrator. Now that I am practicing with Igor, maybe I will illustrate my own books.”

Sheikha Al Zaabi, a 24-year-old Emirati who works as an events co-ordinator, says she hopes the class might take her one step further towards having an exhibition of her work.

“When I went to the gallery and saw Igor’s paintings, I knew I wanted to take the class. I am interested in working with him because he is from Russia, so he has completely new techniques and inspirations. This is my first time painting in the open air and I’m excited about it.”

Amira Rahim, an American who paints from her home studio, says as there are so few classes in Abu Dhabi, this is a rare experience.

“I am really hoping to learn as much as possible this week and to push myself out of my comfort zone.”