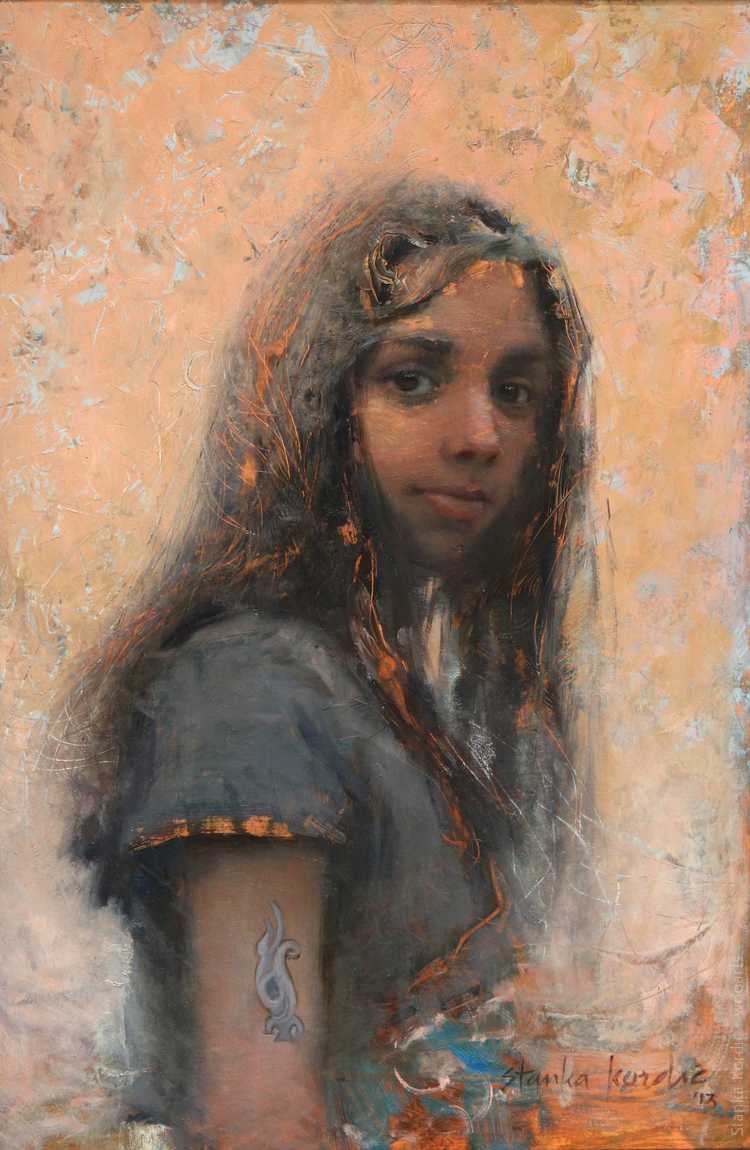 Stanka Kordic is a first generation American born of Croatian parents. She followed her talented brothers, Vladimir and Branko into the world of Art. Stanka graduated from the Cleveland Institute of Art in 1985, with a major in illustration and a minor in painting. From there, she traveled Europe, taking in as much art as humanly possible. She returned to work as an illustrator for several years. Her projects included editorial art, package design, and book illustration.

In pursuit of artistic freedom, she left the commercial world in 1988 to establish a professional art studio, concentrating her efforts on painting the landscape and figure. This led to portrait commissions, international awards, and inclusion in several corporate collections throughout the midwest, including Cleveland Clinic, University Hospitals, and Key Corp.

Since 2009, her focus has been to develop her personal figurative work. Stanka’s awards include, the Gold Medal of Honor in Painting from Allied Artists of America, and 2 Certificates of Excellence from the Portrait Society of America International Competition. Her work has been exhibited and collected widely, and shown in venues nationally, including: the National Arts Club, and the Salmagundi Club in New York City, as well as the Butler Institute of American Art in Youngstown, Ohio.

Stanka’s work and process has been featured in: International Artist Magazine, Fine Art Connoisseur, Southwest Art, and The Artists Magazine. Her paintings are also included in the book, Disrupted Realism: Paintings for a Distracted World, by John Seed.

“The goal of life is to make your heartbeat match the beat of the universe, to match your nature with Nature.” Joseph Campbell

“Poetry is when an emotion has found its thought and the thought has found words.” Robert Frost

When a painter listens for the poetry of life and sees their process as a meditation, they become informed by their own internal voices, without regard for surface distractions that take us further from the balance of our own true nature. Engaging the painting in subconscious dialog and conversation makes process a living thing. Not something fashioned from books or a teachers instruction , but an inner call that places us at one with it.

American painter Stanka Kordic believes that a painting reveals itself to the painter from one moment to the next. That instinct and intuition play a primary role in connecting the artists spirit to the spirit of the materials and the idea being portrayed. That working from a center point of the creative being is where knowing disappears and a sense of unknown begins. From this unknown conscience , true nature is born. It is true nature that is the goal. Kordic believes that the sounds of nature affect our creativity as much as the visual scene. That the texture and feel of the paint informs it’s application as a sensual experience.

That painting is a dance of the spirit which releases itself from you and to you at the same time. That process is a conversation between materials, self and idea. Kordic works mainly from a subconscious- conscious memory and imagination . She believes we pass ourselves on through art which identifies our oneness with nature and ourselves. Kordic’s primary subject matter revolves around children and adolescence and portrays a dream world full of magic potential- not the recognizable reality. Her personal process reduces the idea to its core and puts it into a world of marks and color conveying emotional idealism. The result is a mythic interpretation. That subject matter is symbolic.

The viewer becomes part of Kordic’s world , becoming part of the viewers as well. Stanka Kordic comes from a place of classical traditional values , but chooses to find herself in it. She is fearless in her passion to find out where the paintings will take her. The process is often fraught with change and revision, but Kordic likes to say ” It’s just paint ” and isn’t afraid to wipe out , go over, or even destroy to begin again a work to find the better way. Her work is unique and refreshing as a painter on a journey of discovery to destinations that don’t exist , but are found. Even her artists statement is reductive and to the point… “My practice is centered on responding to the paint in the present moment, within the boundaries that figurative representation provides. A layered conversation begins. I acknowledge all that transpires within those layers – be it felt, observed, or revealed. It all has a place in my process. ”

“Stanka Kordic evokes a world of fragility and sentiment. Kordic’s artistic process, which is centered around her affinity for the undiscovered, is sensitive to mystery, memory, and narrative. Figures vanish, coalesce and layer themselves into painted environments that seem both to sustain and corrode them. Kordic’s resonant images are often unforgettable and just a bit uncomfortable.”