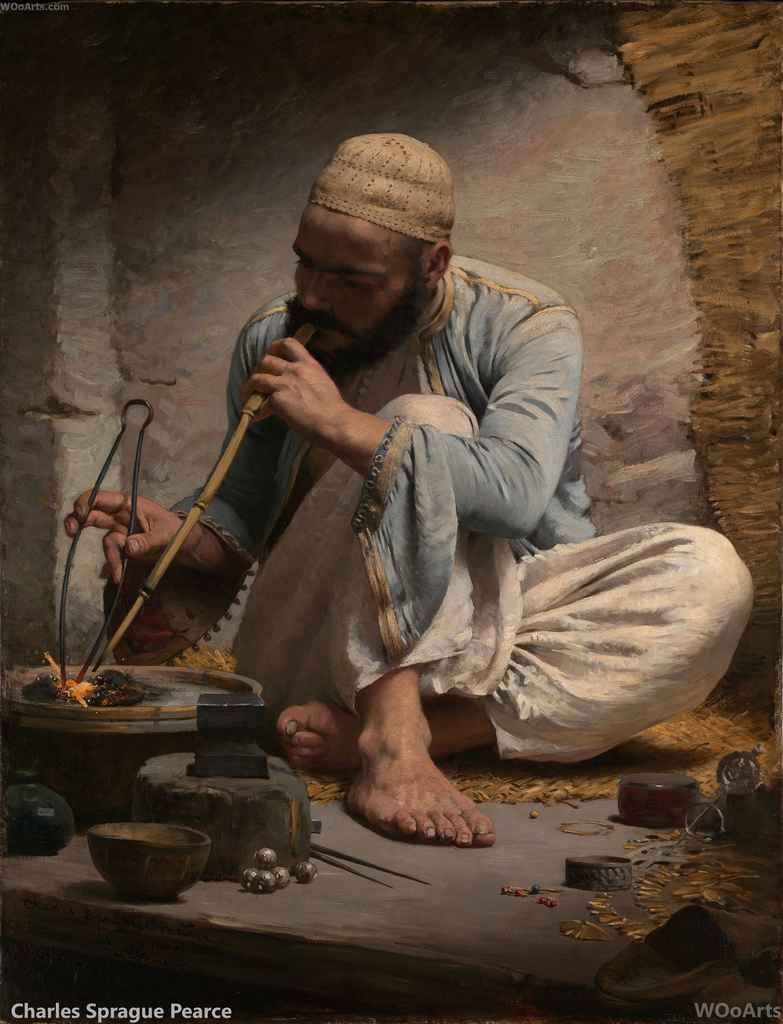 Boston-born Charles Sprague Pearce belonged to the generation of American artists who increasingly settled in France in the post-Civil War years. Like that of his celebrated Parisian teacher, Leon Bonnat, Pearce explored a range of subjects throughout his successful expatriate career. A four-month excursion along the Nile in the early 1870s led to a particular interest in "exotic," or Orientalist themes, such as this ambitious portrayal of a native craftsman.

Every weekend, I have spent several hours to collect, select and refine this album of orientalists artworks. I am sharing it with you all, it is such a sublime art collection that I picked and selected from thousands of photos. I hope you will enjoy as I did and to share it with friends!

This is an article that has great details about orientalism art via metmuseum.org:

The Orient—including present-day Turkey, Greece, the Middle East, and North Africa—exerted its allure on the Western artist’s imagination centuries prior to the turn of the nineteenth century. Figures in Middle Eastern dress appear in Renaissance and Baroque works by such artists as Bellini, Veronese, and Rembrandt, and the opulent eroticism of harem scenes appealed to the French Rococo aesthetic.
Until this point, however, Europeans had minimal contact with the East, usually through trade and intermittent military campaigns. In 1798, a French army led by General Napoleon Bonaparte invaded Egypt and occupied the country until 1801.

The European presence in Egypt attracted Western travelers to the Near and Middle East, many of whom captured their impressions in paint or print. In 1809, the French government published the first installment of the twenty-four-volume Description de l’Égypte (1809–22), illustrating the topography, architecture, monuments, natural life, and population of Egypt. The Description de l’Égypte was the most influential of many works that aimed to document the culture of this region, and it had a profound effect on French architecture and decorative arts of the period, as evidenced in the dominance of Egyptian motifs in the Empire style.

Some of the first nineteenth-century Orientalist paintings were intended as propaganda in support of French imperialism, depicting the East as a place of backwardness, lawlessness, or barbarism enlightened and tamed by French rule. Antoine Jean Gros (1771–1835)—a pupil of Jacques Louis David and a history painter in Napoleon’s employ who never traveled to the Near East himself—conveys this idea in Napoleon in the Plague House at Jaffa (1804; Musée du Louvre, Paris), featuring an Eastern architectural setting and figures in exotic dress. A propagandizing work, it depicts the then-general’s visit to plague-afflicted prisoners during the siege of Jaffa. Recalling both Christian imagery and the divine touch of kings, Gros depicts Napoleon touching an inmate, who gestures in incredulity.

Proponents of the Romantic movement , such as Eugène Delacroix (1798–1863), also avidly took up themes of violence and cruelty in Oriental subjects. Delacroix’s Massacre at Chios(1824) and Death of Sardanapalus (1827–28; both Louvre) embody in images of war and destruction the Romantic themes of human pathos, uncontrollable force, and emotional extremes. The emphasis on military brutality in many Oriental subjects by Western artists reflects ongoing conflicts throughout the century: the Greek War of Independence (1821–30), the conquest of Algeria by the French in the 1830s, and the Crimean War (1853–56).

While many Europeans relied on published travelogues and officially sanctioned literature like the Description de l’Égypte for their impressions of the Near East, many artists, including Delacroix, Jean-Léon Gérôme (1824–1904), Théodore Chassériau (1819–1856), Alexandre-Gabriel Decamps (1803–1860), and William Holman Hunt (1827–1910), made one or more journeys to the region.

Genre painting, the prevalent form of Orientalist art in the nineteenth century, was greatly influenced by artists’ direct experience of everyday life in Near Eastern cities and settlements. Gérôme popularized the theme of the bashi-bazouk, or Turkish mercenary soldier (2008.547.1), often depicted in routine activities (05.13.4) or at leisure, as in a canvas by Charles Bargue (1825/26–1883). For Decamps, whose late career was shaped by the year he spent in Asia Minor (1828–29), depictions of military life (87.15.93) elevated genre subjects to the grandeur of history painting.
These artists and their contemporaries also produced scenes of quiet domesticity, maternity—as in Chassériau’s Scene in the Jewish Quarter of Constantine (1996.285)—and religious piety, seen in Gérôme’s Prayer in the Mosque (87.15.130).

Occasionally, the Near Eastern setting provided a backdrop for religious works with Christian themes. This approach appealed particularly to British artists, as the explicitness of detail encouraged in the Orientalist style upheld the Protestant necessity for iconographic clarity and fidelity to nature in religious art. From his sojourn in Palestine in the 1850s, William Holman Hunt produced paintings such as The Finding of Christ in the Temple (1860; Birmingham Museum & Art Gallery), which uses an Orientalist setting, andThe Scapegoat (1854–55; Lady Lever Art Gallery, Port Sunlight), a Christian allegory set in the Palestinian landscape.

Some of the most popular Orientalist genre scenes—and the ones most influential in shaping Western aesthetics—depict harems. Probably denied entrance to authentic seraglios, male artists relied largely on hearsay and imagination, populating opulently decorated interiors with luxuriant odalisques, or female slaves or concubines (many with Western features), reclining in the nude or in Oriental dress.

Jean Auguste Dominique Ingres (1780–1867) never traveled to the East, but used the harem setting to conjure an erotic ideal in his voluptuous odalisques. Beyond their implicit eroticism, harem scenes evoked a sense of cultivated beauty and pampered isolation to which many Westerners aspired. The taste for Orientalism further manifested itself in Eastern architectural motifs, furniture, decorative arts, and textiles, which were increasingly sought after by a European elite.
Proponents of the Aesthetic movement in Great Britain (1860s–80s), who collectively advocated an aesthetic of beauty for its own sake and valued form over content in art, took particular inspiration from Oriental interiors.

This taste is exemplified in the Arab Hall (1877–79) in the London home of artist Frederic Leighton (1830–1896): glittering with mosaic tiles collected from Leighton’s journeys to the East, it served as a gathering place for like-minded aesthetes. The potency of Orientalist images remained undiminished for many artists into the twentieth century, including Auguste Renoir, Henri Matisse, Paul Klee, Vasily Kandinsky, August Macke, and Oskar Kokoschka, all of whom took up Orientalist themes.