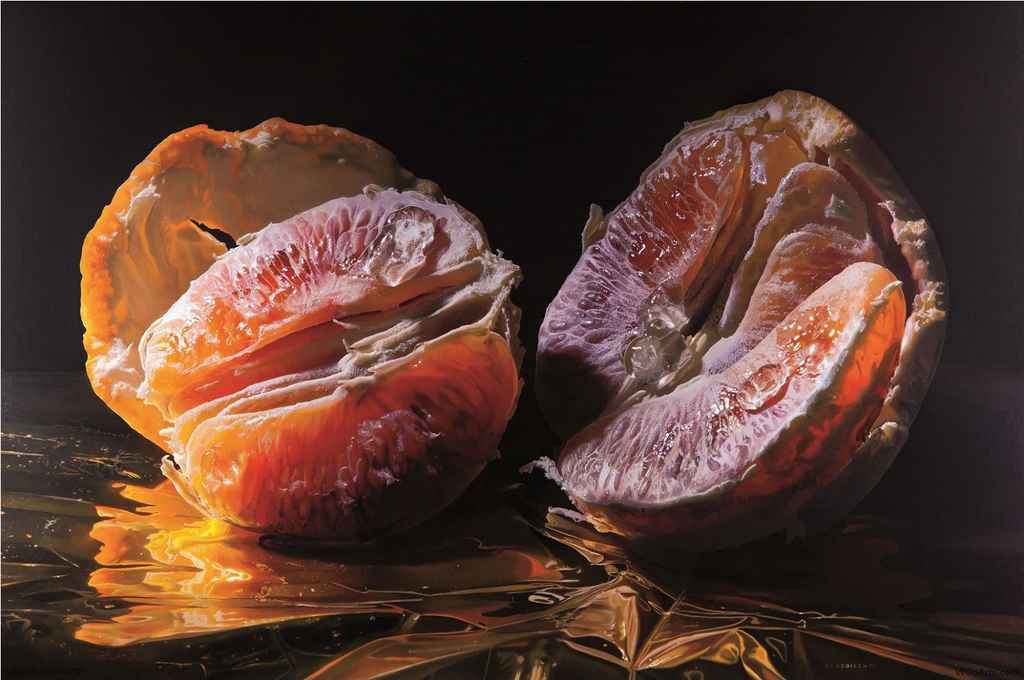 Italian photo-realist artist Luigi Benedicenti has created hyper-realistic paintings of delicious food – from cakes and berries to fruits and ice-cream. Luigi was born in 1948 in Torino, Italy, and since the late 60s completely devoted his life to the movement of “realism.” He was recognized for his seductive representations of sweets, pastries, and other still life compositions.

Benedicenti’s sensual use of light, reflection, and his invisible brush strokes make his gloss-like paintings seem edible enough to eat.

For his work, he chose the theme of food. Looking at the colorful still life works of Luigi, hard to believe that they are actually drawn, not photographed. Luigi graduated from Turin School of Arts. The viewers were delighted with his first works, and his first exhibitions were a great success.

The talented artist continued to paint, but avoided performing in exhibitions. Only in the early 90’s Luigi Benedicenti started to participate in group and solo art exhibitions.

At the moment, hyper realistic paintings by Luigi Benedicenti are widely known throughout world, and his show is always accompanied by a huge popularity. The artist tries to convey in his work all the excitement and feelings he experiences every day, living in a small town in Italy, among his family and friends.

The overused comparison between Caravaggio and realist painters does not really suit Luigi Benedicenti. It is somewhat reductive to confine the historical horizon only to a sole artist, even of such skillfulness as the Lombard master. The work of Benedicenti is deeply rooted in the still-life tradition that sprouted in Europe in the late XVI (16th) century, embodied by such masters as Bosschaert the Elder and Bruegel the Elder, whose accurately descriptive paintings were often employed for scientific purposes.

Such naturalism reached its apogee during the XVII (17th) century in Rome and Naples with painters as Pietro Paolo Bonzi, Giovan Battista Ruoppolo or Giuseppe Recco specialized in the production of lavish still-lives, swarming with groceries, bovine carcases, game, shining fish and iridescent shellfish of unusual shape.

Notwithstanding Luigi Benedicenti has a strong independent personality which cannot be fully explained through the prism of his precursors. After having deeply meditated on their works, absorbed the symbolic value, Luigi moved away from this genre.

He came up with a completely new style, what the critic Claudio Malberti defined as ‘Realismo Estremo’ or ‘Extreme Realism’. Benedicenti replaces the fish and meat that used to decorate the dining rooms of the leisure class with contemporary Italian patisserie, ice cream and classy drinks.

However the change in subject matter is not the only innovation introduced by Benedicenti. Luigi is a son of our times and as such he uses all the technical means at his disposal. The strong artificial lights utilized during the early stages of his paintings allow him to get the essence of the subject depicted and convey the same censorial feelings that the object would produce in real life.

Benedicenti’s style – clear, immediate, shiny of multicolored reflections – is the result of years of intense study and tireless practice.

Walking into the Bernarducci Meisel Gallery, visitors may have to physically refrain from drooling. “Is that over-sized, custard-filled tart–overflowing with glazed sugar–real?” the aforementioned visitors’ taste buds might ask.

Unfortunately, no–the giant, delicious-looking tart on the wall is merely a meticulously detailed oil painting created by Italian artist Luigi Benedicenti.
Born in the northern city of Turin, Italy, Benedicenti has been exhibiting work in his native country since the 1970s. In 2003, he began showing his work in the U.S.

Though technically his paintings classify as still life of Italian desserts and nude women, the word only loosely describes Benedicenti’s work.

The Italian artist has played a pivotal role in the evolution and modernization of the genre. The term “realismo extremo” frequently comes up in descriptions of his work, indicating that his paintings are so detailed; they almost transcend the meaning of “realistic.” Unlike most still life, his art evokes a highly sensory and sensual response (thus the drooling).

GALO spoke with Benedicenti about how he is inspired and how he resists the urge to eat the delicious desserts he paints.

GALO: What is it about Italian desserts that has inspired you to paint them?

GALO: Do you also bake the real life desserts before painting them?

LB: Even if I am not a bad cook – without false modesty, I consider myself to be a good cook – I do not bake the pastries I depict. They are traditional Italian pastries, prepared by professional bakers who sell them in their shops. Unfortunately, as I suffer from diabetes, I cannot eat them after taking photographs, but I can assure you that I have never had any problem in finding volunteers for such a task!

GALO: Do you see yourself fitting into the “realismo extremo” style?

LB: I would like to highlight that this definition is sometimes reductive of my daily challenge that is to convey the same feelings that the observer could experience only by “living” or “touching” the things I represent.

In this way, my pastries, a dish of pasta or a fruit, are intended to stimulate the senses and the taste buds; my nudes, in which I highlight some details of the skin, are intended to exalt both the sensuality and the gracefulness of the female body, but at the same time to induce the observer to make sure of the temperature of the body itself.

To conclude, through my paintings I want to fuel into the beholder a tactile feeling, a sensory feeling that can involve him completely.

GALO: In 2008, you exhibited La Dolce Vita at the Bernarducci Meisel Gallery. Now, three years later, you are back with Decadenza Dolce. What’s different this time?

LB: In the past three years my intention has been to explore new interpretations of reality through the creation of new composition. My aim was to search for something “more real than real.”

I want to improve reality, make it better through a more precise graduation of light and color, which create shapes and highlight details which would otherwise go unnoticed or that would not be perceived in all their strength.

Let’s play a game of Photograph or Painting. Take a look at the images below and make a mental note on what’s a painting and what’s a photograph. I’ll give you a minute. Ok, ready? Uh, all of them are paintings.

The attention to detail put into the paintings are beyond me. You can see crumbs on the pastries and preservation in the fruits, while the lighting and textures of the different subjects are perfect. Boy, you wouldn’t want one of those paintings hanging around your house when you’re on a diet.