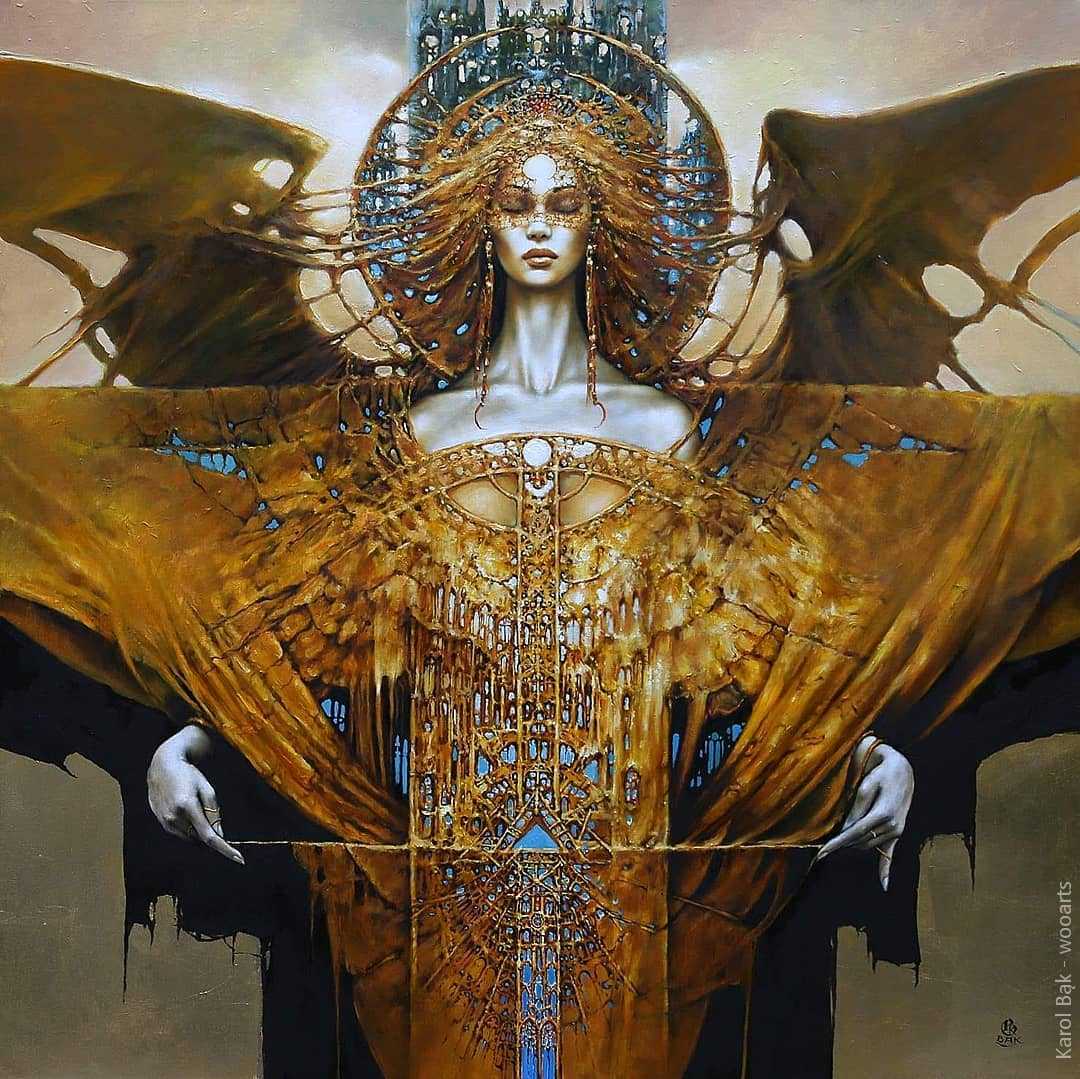 Karol Bak was born on 30 May 1961 in Koło in the Wielkopolska Region. He graduated from the Fine Arts High School of Poznań with a degree in Interior Exhibition Arrangement. In 1984, he was admitted to the Graphics Department of the State College of Art (currently the University of Arts in Poznań). He already knew what direction he wanted to take in his studies – painting, graphics and sculpture were perceived as a prestigious pursuit of “searching for pure art.” He was confident he had made the best choice. He graduated in 1989 with distinction, with two degrees in Graphics, under Prof. Tadeusz Jackowski, and Drawing in the studio of Prof. Jarosław Kozłowski. He said this about his final examination:

I displayed my drawings and graphics for two thesis supervisors in two large rooms of the Poznań Artistic Exhibition Office. In my graphics, mainly using the technique of copperplate engraving, I attempted to express my perceptions of timeless content and values. By contrast, my large drawings reflected my reality at the time, as I searched for answers to a number of daunting and pressing questions. One of the drawings, measuring 2 x 8 meters, showed life-size members of the communist riot police in combat formation en face. They stood, contrasted with a horseshoe-shaped barricade of randomly arranged chairs, an “installation” of sorts. There was also a 3 x 3 meter self-portrait, based on the golden ratio – the canon of proportions first proposed by Leonardo da Vinci.

Both professors who supervised the artist in his two theses were strong influences on his art. Tadeusz Jackowski (born 1936) looked for illusion in his art, attempting to deceive the eye of the viewer. He combined various techniques, some of the more unusual of which were engraving and hand-painting. Jarosław Kozłowski (born 1945) has been exhibiting his works since the late 1960s, mostly in installations relying on drawings, sound, light, photography and performance. He is associated with conceptual art and views art idealistically, as a domain of freedom, unrestrained by convention.

Karol Bak may well have adopted Tadeusz Jackowski’s love for graphics and drawing, as well as his penchant for illusion. Jarosław Kozłowski instilled in him the drive to create free art, which is then interpreted individually, in line with particular contexts.

He perfected his painting technique under Andrzej Maciej Łubowski of the Fine Arts High School and, once at the Academy, under Prof. Andrzej Kurzawski.

In 1989, Karol Bak graduated with distinctions and two degrees. He received the “Best Graduation Work 1989” Award in Toruń. In the following year, he took part in the 21st exhibition of the graphics and drawings of the year, receiving the Jan Wroniecki medal. He garnered the top award for his graphics. As commented by Danuta Kudta in a historic text in Poznań’s Arsenał City Gallery:

Without a doubt, the majority of the contenders in the J. Wroniecki competition, whether in graphics or drawing, have remained faithful to classical techniques. And admittedly, their technique is flawless. Many artists, particularly young ones, delight in expressing themselves through challenging metalworking techniques, and equally meticulous drawings which require careful attention to detail. However, young artists use these traditional techniques to express new polysemantic content.

The camouflage of technical perfectionism conceals essential symbols and metaphors, implied meanings and understatements… The works of the contest winners clearly stand out from among the drawings and graphics submitted for the contest exhibition. A particularly remarkable piece is the one awarded first prize and the J. Wroniecki medal: Karol Bąk’s precisely engraved copperplate, depicting a metaphysical pyramid. (…) The graphics and drawings presented in this exhibition tend to be more than just a soulless display of technical aptitude. They carry a significant load of emotion and multiple meanings. They reflect the reality around us, form a record of the existence of today’s man, often highly dramatic.

The work submitted by Karol Bak was entitled The Mystery of the Triangle. The purpose of this graphic was to answer the question of whether there is sense in perceiving, describing and studying the world by scholarly and mathematical methods. The pyramid reflected the golden triangle ratio; a graph which followed a mathematical formula extended into infinity.

In the years immediately following his graduation, the artist focused on drawings and copper plates which portended the characteristics of his future style. The two were not the only techniques dear to his heart. As the artist himself explained in an interview for Food & Life magazine:

I have long searched for my path and I think I still am searching. After all, it is not the end that counts but the meticulous journey (…). As early as my university years, I began with drawings and graphics, explored the world of sketches and frescos. For some time, I dwelled on modern art: abstracts, performances and installations, ultimately to arrive at oil paintings, years later.

In the following years, the artist focused on the commercial design of, for example, magazine covers, exhibition stands for the Poznań International Fair, the first billboards and tram advertisements, perfume packaging, company logos, tattoos and public and private interiors. The world was not receptive to more artistic creations.

In the early 1990s, Karol Bak set out on a number of travels to explore and experience the uniqueness of sites which are key for Western European art. In addition to the museums in Germany, Belgium, France, the Netherlands and Spain included in his scheduled itinerary, there were others which he visited spontaneously, without prior planning. The artist earned money during these travels by drawing portraits. He recollects one unusual encounter:

…when in Leer, I resided in the castle of a certain incidental acquaintance, an aristocrat, where I painted copies of his private original Dutch masters.

His artistic journeys, the longest of which lasted two months, allowed him to revise his views on certain famous artists, whose works did not impress him much, as well as some lesser-known names, whose unpublished paintings he discovered in provincial museums. The painter, nevertheless, has no intention of taking credit away from famous artists, or undermining the value of their works.

I was struck by the magnificence of the original works of, among others, Rembrandt, El Greco, Vermeer, Grünewald, Bellini, Greek and Roman sculptures, Medieval, Gothic architecture, outstanding cathedrals, ancient amphitheatres, (…) Dürer, the Cathedrals of Chartres, Lyon, the fabulous Avila, Porta Nigra in Trier, Brussels with its amazing drawings museum located seven floors underground (…).

His first-hand experience of numerous culturally significant works of art allowed Karol Bąk to develop his own way of seeing the world of art and, by the same token, his own unique style.

I draw my inspiration from all available sources, I am always on the lookout for inspiration as I explore the world; I have seen many masterpieces and used them to develop my own standards of beauty and aesthetics.

In the late 1990s, the artist shifted his focus towards oil painting, which he has pursued professionally since 2000. In December 2010, he said this about what oil painting meant to him in an interview for Food & Life.

Oil painting is the closest to me due to the technique itself, the freedom afforded by the colours and the way in which images are presented. This style and technique allows me to focus and be greatly inspired. It enables me to create illusory images saturated with colour and emotions, while adhering to a specific form.

Over the last dozen plus years, Karol Bak has painted hundreds of oil paintings. These make up the lion’s share, if not the totality of his artistic achievement. The artist has also produced graphics, ink drawings, pastel portraits, pencil sketches and frescos. His works vary not only in technique, but also in the way they are viewed. Oil painting may well be considered the brightest and most cheerful side of his artistic soul, whereas his drawings and sketches constitute a shadier and more sinister aspect of his art. Both have been coming together for years, in the thematic series Sailing Ships and Dialogues. His other oil painting themes include Cocoons, Aureoles, The Four Elements, Judith and Salome, Prima Mobilia as well as the Nocturnes series inspired by the music of Frederic Chopin, made to mark Chopin Year, 2010.

Since 1988, the artist has held over a dozen individual exhibitions and taken part in tens of collective displays. The latter included Polish Surrealists (Warsaw 2008), ART.-EXPO (New York, Las Vegas 2008), Primavera (Rotterdam, the Netherlands 2008 and 2009), The Charm of Women. The Allure of Flowers (Sopot 2009), Magical Dreams (Włocławek 2011), Art Revolution Taipei (Taipei, Taiwan 2012 and 2013), ARTEUOMO (Rome, Italy 2012), and Magical Dreams II (Szczyrk 2013). His works have inspired students of the Warsaw School of Arts, who used costumes from the paintings to design their own creations. He has taken part in international plein-air workshops at home and abroad, including Segovia, Spain.

Paintings by Karol Bak worship the ideal of female beauty. The artist is a glorifier of womanhood. Meanwhile, his women are everything – angels, pearl-divers, birds, personification of winds, incarnated murders (Judyta, Salome) and even death (Thanatos). And from time to time their dimension is galactic – they are super new or the Milky Way.
Born in 1961, Karol Bak studied at the State Academy of Fine Arts (1984 – 1989), from which he graduated with honors. His works are participants of art exhibitions in different countries, both European and overseas. Karol Bak lives and works in Poznan, Poland.
Looking at his paintings, you can think that this is an illustration or computer graphics. However, Karol Bak paints in oils on canvas.

“Beauty is a form of Genius – is higher indeed than Genius, as it needs no explanation. It is one of the great facts of the world, like sunlight, or springtime, or the reflection in the dark waters of that silver shell we call the moon. It cannot be questioned. It has divine right of sovereignty. It makes princes of those who have it.”- Oscar Wilde

Karol Bak is a  painter, draftsman and renowned  artist based in Poznan, Poland. With his various skills he has fine tuned his capacity to showcase the female form. Such works are upheld in themed cycles such as “The Sailing Ships Cycle”, “The Dialogues Cycle”, “The Cocoons Cycle”, “The Aureoles Cycle”, “The Four Elements Cycle”, “Judith and Salome Cycle”.

The ethos behind his extensive works is a woman’s beauty. Each piece serves to highlight the aesthetic beauty that a woman is known for. His paintings draw light to a woman’s physical shape his figures are classically suggestive with its geometric shapes pertinent to what beauty is defined as today but in an ideal world.

Bak’s enchantresses are immersed in myth and legend. Their portrayal is emblematic of various elements or personifications of malevolence and benevolence.  They are captured as a goddess, celestial being or mythical creatures such as Medusa and elements of seduction are harnessed through their almost succubus characteristics.

There is a masterhood upheld  in each piece  not only against the figures themselves but their surroundings which are adorned with various elaborate headdresses and clothing.  Their clothing and shapes seamlessly  form a synthesis with their  surroundings.

In their own right these female figures represent various facets of the female character. Bak not only tries to capture the initial aestheticism of each creature but the more difficult objective is to reach their spirituality by trying to capture the very essence of their being.

Their nature is further revealed by their bewitching eyes, engaging the viewer to look further into their soul and touching on their world of sorcery, spellbinding the viewer with their beauty and psyche.

Bak’s paintings ultimately serve to reveal to the viewer many paradigms of beauty, but in the eyes of each viewer:

The perception of beauty is a moral test. – Henry David Thoreau