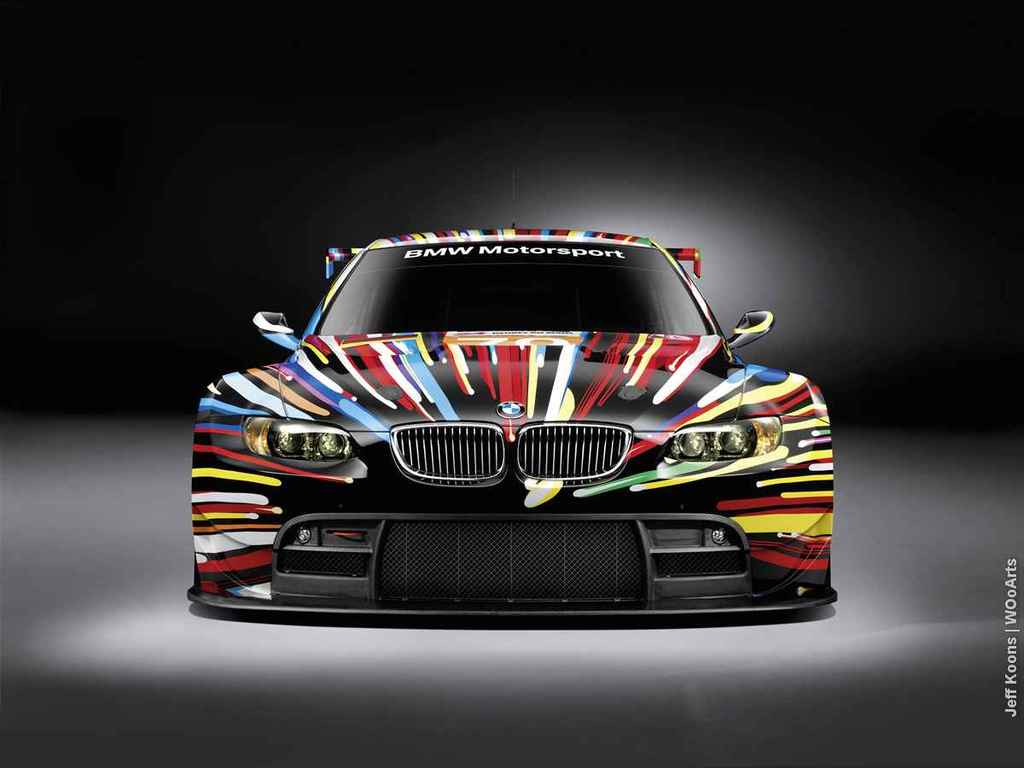 In 2010, BMW announced that american artist jeff koons, would design the 17th art car for the german automotive company.
Several months later, Jeff Koons revealed his design of the BMW art car and signed by him at the Parisian Centre Pompidou. Which was the same place where Roy Lichtenstien presented his art car back in 1977.

The design was made for BMW M3 GT2, which was homologated to compete at this year’s running of the world’s most famous endurance race. On june 12th and 13th, the 495 hp BMW car will follow in the footsteps of the first BMW art cars and have its run in the 24 hour of Le Mans race in france.

As part of his creative process for that project, Koons collected images of race cars, related graphics, explosions. He worked very close with the BMW engineering and design teams to conduct in-depth explorations of materials and application options which would prove advantage in optimizing both the aesthetic and aerodynamic attribution of the race car. The challenge of creating the BMW art car had to do with light material application that would not interfere with the car’s aerodynamics and weight when put to the test.

Koons graphics was a digital print on the car in wrapping vinyl, covered by a double clear-coating to bring out the color. CAD designs were translated from 3D to 2D for the printing process and then applied to the entire car, including individual spare parts.

The result was a vehicle with hundreds of dynamic lines, expressed through bright contrasting colors communicating the aesthetics of power, making the car look fast even when it is sitting still. Bold images of debris were added to the rear sides and back of the car simulating the force of the vehicle. Two graphic rings at the rear represent supersonic acceleration.

via: written by Andrea Chin at designboom

Who is Jeff Koons?

What is artist Jeff Koons timeline?

Since his first solo exhibition in 1980, Koons’s work has been shown in major galleries and institutions throughout the world. His work was the subject of a major exhibition organized by the Whitney Museum of American Art, Jeff Koons: A Retrospective (June 27 – October 19, 2014), which traveled to the Centre Pompidou Paris (November 26, 2014 – April 27, 2015) and the Guggenheim Bilbao (June 9 – September 27, 2015). A solo exhibition of his work is on view at the Ashmolean Museum, Oxford, United Kingdom (February 7, 2019 – June 9, 2019).

What is artist Jeff Koons famous for?

Koons is widely known for his iconic sculptures Rabbit and Balloon Dog as well as the monumental floral sculpture Puppy (1992), shown at Rockefeller Center and permanently installed at the Guggenheim Bilbao. Another floral sculpture, Split-Rocker (2000), previously installed at the Papal Palace in Avignon, Château de Versailles, and Fondation Beyeler in Basel, was most recently on view at Rockefeller Center in 2014.

What are Jeff Koons Awards?

Jeff Koons has received numerous awards and honors in recognition of his cultural achievements.

In 2017, Koons was made the first Artist-in-Residence at Columbia University’s Mortimer B. Zuckerman Mind Brain Behavior Institute and, also, made an Honorary Member of University of Oxford’s Edgar Wind Society for Outstanding Contribution for Visual Culture.

Koons has been a board member of The International Centre for Missing & Exploited Children (ICMEC) since 2002, and co-founded the Koons Family International Law and Policy Institute with ICMEC; for the purpose of combating global issues of child abduction and exploitation and to protect the world’s children.