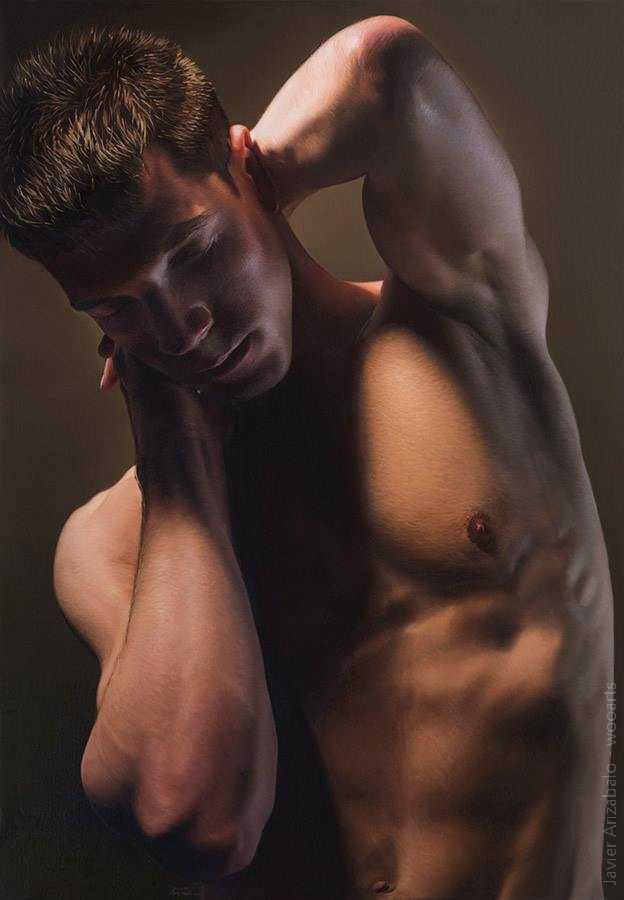 Javier Arizabalo, born in Saint-Jean-de-Luz (France) in 1965, studied with a number of different local artists in the Bidasoa region and at the Municipal Academy of Drawing in Irun before attending the Faculty of Fine Arts in Lejona (1983-1988), where he earned a degree in graphic design. From 1989 to 2004 he worked as a graphic designer with minor incursions into the fields of photography and synthetic imagery, teaching also at the Irun Municipal Academy of Painting and Drawing from 1997 to 2001.

In 2006 he turned his attention exclusively to painting, working mainly in a kind of meticulous realist style, studying the effects of light on the human body. He also explored the sensitivity and repose of his models, which allow themselves to be contemplated in order to create a feeling of tranquillity in the viewer.

Javier Arizabalo is passionate about hyperrealism. He carries out his works with different techniques, but it is in oil where he finds the most expressiveness, since it allows him to work in maximum detail, understanding the light and the structure of the human anatomy.

Hyperrealistic Hand Paintings are So Supple They Look Like Photos

Expressive Hyper-Realistic Hand Paintings Highlight the Personality at Our Fingertips.

Given their complex anatomy, hands are often considered one of the most difficult subjects to draw. Artist Javier Arizabalo Garcia, however, manages to capture the expressive language of hands in his hyperrealistic paintings. On each canvas, he renders a posed hand so supple that you’d think it was a photograph.

Based in Spain, Garcia received formal fine art training in his Basque hometown of Irun and at the University of Bilbao. After careers in both graphic design and photography, the artist decided to pursue painting full-time in 2006. His successful creative practice focuses on traditional figurative subjects such as people and still lives and emphasizes strong realism techniques. Thanks to a keen understanding of light and shadow, Garcia renders three-dimensional models using only oil pigment. But you might not realize this fact; his brushstrokes are so fine and precise they appear invisible to the eye.

In his depictions of isolated hands, Garcia recalls classical figurative painting. Each work is set against a plain atmospheric background, typically black or gray, wherein the only focus is the gesture of the hand. While in some pieces the light source is unknown, in others there is a staged candle that illuminates the fingers and palm.

Scroll down to see more incredible paintings by Garcia, and follow the artist on Instagram to keep up to date with the artist’s latest creations.

Artist Javier Arizabalo Garcia creates hyperrealistic paintings of hands. He masterfully renders the suppleness of skin in oil paint. Some pieces are staged with a candle to illuminate the palm.

Hyperrealism is a genre of painting and sculpture resembling a high-resolution photograph. Hyperrealism is considered an advancement of Photorealism by the methods used to create the resulting paintings or sculptures. The term is primarily applied to an independent art movement and art style in the United States and Europe that has developed since the early 1970s. Carole Feuerman is the forerunner in the hyperrealism movement along with Duane Hanson and John De Andrea.  via: wikipedia