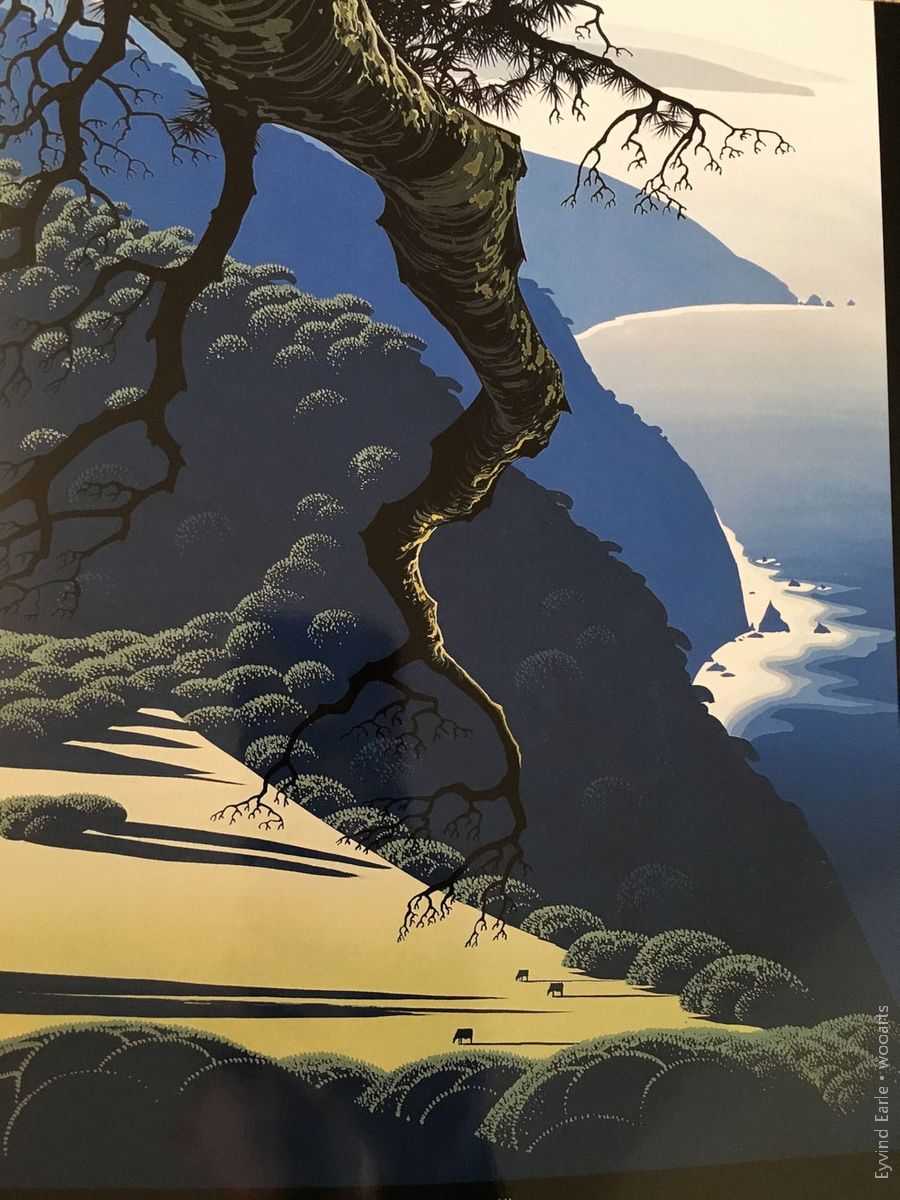 Born in New York in 1916, Eyvind Earle began his prolific career at the age of ten when his father, Ferdinand Earle, gave him a challenging choice: read 50 pages of a book or paint a picture every day. Earle choose both. From the time of his first one-man showing in France when he was 14, Earle’s fame had grown steadily. At the age of 21, Earle bicycled across country from Hollywood to New York, paying his way by painting 42 watercolors. In 1937, he opened at the Charles Morgan Galleries, his first of many one-man shows in New York. Two years later at his third consecutive showing at the gallery, the response to his work was so positive that the exhibition sold out and the Metropolitan Museum of Art purchased one of his paintings for their permanent collection. His earliest work was strictly realistic, but after having studied the work of a variety of masters such as Van Gogh, Cézanne, Rockwell Kent and Georgia O’Keefe, Earle by the age of 21, came into his own unique style. His oeuvre is characterized by a simplicity, directness and surety of handling.

In 1951 Earle joined Walt Disney studios as an assistant background painter. Earle intrigued Disney in 1953 when he created the look of “Toot, Whistle, Plunk and Boom” an animated short that won an Academy Award and a Cannes Film Festival Award. Disney kept the artist busy for the rest of decade, painting the settings for such stories as “Peter Pan”, “For Whom the Bulls Toil”, “Working for Peanuts”, “Pigs is Pigs”, “Paul Bunyan” and “Lady and the Tramp”. Earle was responsible for the styling, background and colors for the highly acclaimed movie “Sleeping Beauty” and gave the movie its magical, medieval look. He also painted the dioramas for Sleeping Beauty’s Castle at Disneyland in Anaheim, California.

Earle’s work was also seen on television. One of his animated creations was an 18-minute version of the story of the Nativity that he did in 1963 for Tennessee Ernie Ford’s Special “The Story of Christmas”. A Daily Variety reviewer said Earle’s sequence “should be preserved and played back for years on end.” The show was digitally re-mastered in 1997.

Earle’s career has encompassed many different fields. In addition to book illustrating, the artist had also designed a number of covers for magazine publications and had produced and created several animated commercials and specials for television.In 1998, at its Annie Awards show in Glendale, the International Animated Film Society gave Earle its Windsor McCay Award for lifetime achievement.

In the 1940’s, Earle adapted his creative landscapes to Christmas cards, painting more than 800 designs that have sold more than 300 million copies through American Artist Group.

After about 15 years creating animated art, Earle returned to painting full time in 1966 and kept working until the end of his life. In addition to his watercolors, oils, sculptures, drawings and scratchboards, in 1974 he began making limited edition serigraphs. Eyvind Earle had a totally original perception of landscape. He successfully synthesizes seemingly incongruent aspects into a singularly distinctive style: a style, which is at once mysterious, primitive, disciplined, moody and nostalgic. He captures the grandeur of simplicity of the American countryside, and represents these glimpses of the American scene with a direct lyric ardor. His landscapes are remarkable for their suggestion of distances, landmasses and weather moods. “For 70 years,” Earle wrote in 1996, “I’ve painted paintings, and I’m constantly and everlastingly overwhelmed at the stupendous infinity of Nature. Wherever I turn and look, there I see creation. Art is creating…Art is the search for truth.”

Eyvind Earle passed away on July 20, 2000 at the age of 84. During his lifetime he created many paintings, sculptures, scratchboards, watercolors and drawings that have not been publicly seen or exhibited. Eyvind Earle Publishing LLC, under the specific instruction of the late Eyvind Earle, will continue the legacy of the artist, promoting and introducing new serigraphs and books through galleries worldwide. These posthumous limited edition serigraphs will be printed from the oil paintings created by Eyvind Earle that are in the collection of Joan Earle and others.

On August 15, 2015, Eyvind Earle received the Disney Legend Award. The Award was accepted on behalf of the late artist by his daughter, Kristin Thompson,

1936
– Exhibitions at Laguna Beach Art Association and at galleries in Hollywood and Beverly Hills, CA.

1944
– Created and painted a mural for the Jacksonville Naval Ait Station, Jacksonville, Florida.

1947
Joined American Artists Group which has published over 600 of Earle’s designs and sold over 300,000,000 of his Christmas cards during the past 50 years.

1948
– Exhibited at the Los Angeles County Museum.
– Presented with an award at the Califonia Art Association Exhibition.

1951
– Started witht the Walt Disney Studios as background painter on: FOR WHOM THE BULLS TOIL, MELODY, and the Academy Award winner for “Best Short of the Year” TOOT, WHISTLE, PLUNK and BOOM which also received a Cannes Film Festival Award. Production Designer, Color Stylist and Background Painter for the DIsney animated classic SLEEPING BEAUTY, as well as, PIGS IS PIGS, GRAND CANYONSCOPE, PAUL BUNYAN, LADY AND THE TRAMP, LONDON BRIDGE, and WORKING FOR PEANUTS.
– Designed 5 murals for Disneyland.

1968
– Moved to Solvang, CA.
– One-man exhibitions at the Copenhagen Gallery, Solvang; the Conacher Gallery, San Francisco; and the Zantman Gallery, Carmel, CA.
– Received First Prize Gold Medal at the National Exhibition THE STORY OF CALIFORNIA IN ART.
– Received a Purchase Award from the Phoenix Museum of Art, Phoenix, Arizona.

1991
– Publication of illustrated autobiography HORIZON BOUND ON A BICYCLE, and the raisonne of serigraphs produced to date, THE COMPLETE GRAPHICS OF EYVIND EARLE and Selected Poems and Writings, 1940-1990.
– The One-man major exhibition EYVIND EARLE 75 YEARS in Los Angeles in celebration of the artist’s 75th birthday.
– One-man exhibition at the Hammer Galleries, New York City.

2015
– August , Eyvind Earle receives the Disney Legend Award at D23 Expo, Anaheim, CA. The Award was accepted on behalf of the late artist by his daughter, Kristin.

Eyvind Earle (April 26, 1916 – July 20, 2000) was an American artist, author and illustrator, noted for his contribution to the background illustration and styling of Disney’s animated films in the 1950s. The Metropolitan Museum of Art, New York, Rahr West Art Museum, Phoenix Art Museum and Arizona State University Art Museum have purchased Earle’s works for their permanent collections. His works have also been shown in many one-man exhibitions throughout the world.

Earle was born in New York, but his family moved to Hollywood in 1918. He began painting when he was 10 years old, and had his first solo show in France when he was 14.

Earle’s first New York exhibition was at the Charles Morgan Galleries in 1937. In a 1939 exhibition, the Metropolitan Museum of Art purchased one of his works for its permanent collection. His work at this time was realistic painting. In the 1940s he painted more than 800 Christmas card designs for the American Artist Group.

In 1951 he joined Walt Disney Productions as an assistant background painter and received credit for the experimental background painting in the Goofy short, For Whom the Bulls Toil. In 1953 he created the look of Toot, Whistle, Plunk and Boom, a short animated film which won an Academy Award and a Cannes Film Festival Award. He also worked on Peter Pan, Working for Peanuts, Pigs is Pigs, Paul Bunyan, and Lady and the Tramp. He was responsible for the styling, background and colors for the highly acclaimed Sleeping Beauty.

In 1961, Earle completed an 18-minute animated segment of the Nativity story for the Tennessee Ernie Ford hosted television special The Story Of Christmas on NBC.

Earle returned to full-time painting in 1966, producing watercolors, oils, sculptures, drawings, scratchboards, and limited-edition serigraphs. Much of this work was not exhibited in his lifetime.

He died of esophageal cancer in 2000.

Earle’s work and distinct graphic styling has continued to inspire new generations of artists and animators, serving to influence the look of other animated films. These have included the Disney features Pocahontas and Frozen, as well as the graphic style of Sony Pictures Animation’s debut film, Open Season.

The Banner Saga, a video game by developers Stoic, draws heavily from Earle’s style and contains a character named after him. He is credited for ‘Artistic Inspiration’.

In May 2017 The Walt Disney Family Museum hosted an 8-month original retrospective exhibit: Awaking Beauty: The Art of Eyvind Earle. An accompanying hard cover exhibition catalog was published under the same name ISBN 978-1681882710.

In 1998, Earle was honored at the 26th Annie Awards with the Winsor McCay Award for a lifetime achievement in the art of animation.

In 2015, in a presentation at the D23 Expo in Anaheim, California, Earle was inducted as a Disney Legend. His daughter, Kristin Thompson, accepted on her father’s behalf.
via: Wikipedia