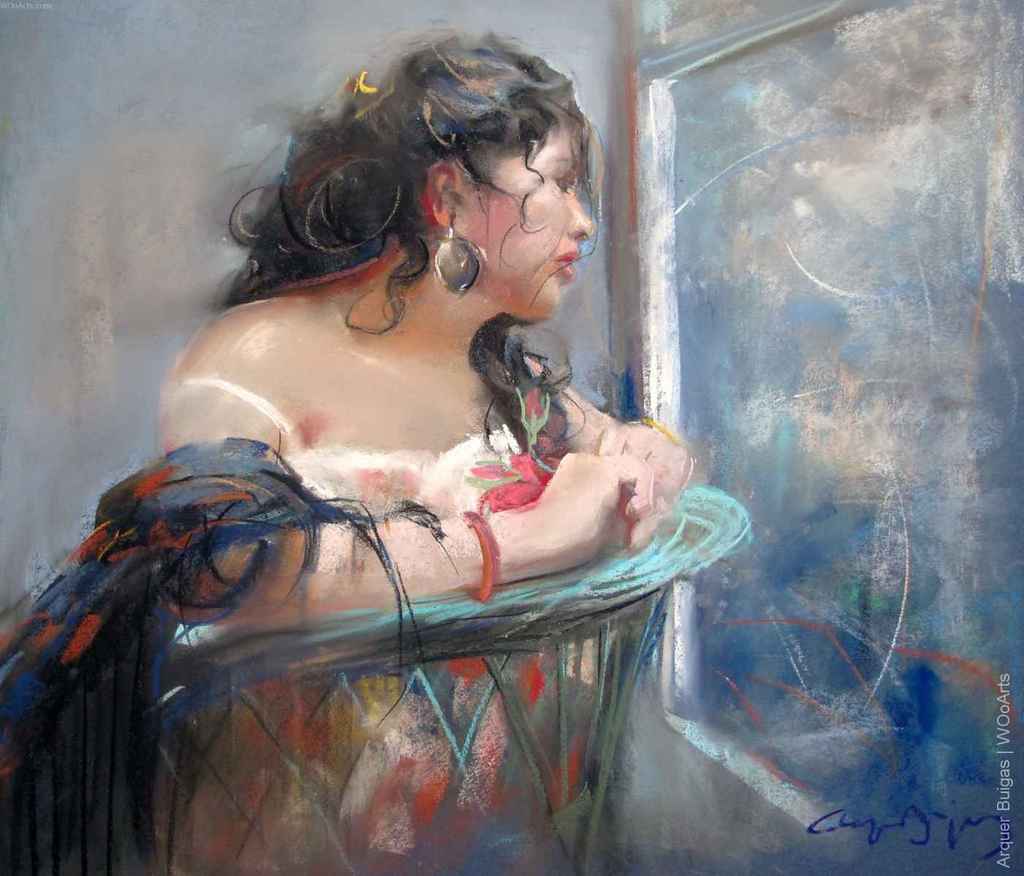 The Figurative and The Impressionism!

Arquer Buigas was a painter with an impressive capacity for producing work. Even if we disregard a number of pieces completed as a young man that he later burned in the garden of his childhood home in Cerdanyola, Arquer Buigas’s oeuvre boasts around 300 portraits, 3,000 pastels and charcoals, a similar number of oil paintings; as well as other drawings and works of various techniques.

However, perhaps the most impressive aspect of Arquer Buigas enormous output, however, is not its quantity but its quality, due to the ceaseless search for perfection at the heart of each work, from his first oil painting to the final portrait, finished just hours before his death.

(January 11th, 1932-September 13, 2012) was a native of Cerdanyola del Vallés in the Province of Barcelona. He was a Catalan contemporary figurative painter, especially known for capturing the beauty, sensitivity and delicacy of women of his era through pastel, oil and charcoal techniques. With an equal mastery, he explored portraiture, figure studies, equestrian subjects, landscapes, scenes of daily life, maternity, taverns and more.

Arquer Buigas stands as perhaps one of the most emblematic inheritors of 19th-century Catalan and French Impressionist style (seen in artists such as Ramón Casas and Eduard Degás). With his elegant, restrained color palette and compelling balance between composition and subject choices, Buigas’s output has afforded him the status of a beloved, enduring master.

The artistic integrity evinced in Arquer Buigas’ work is the result of an innate talent for drawing and painting, a keen skill for eloquently conveying beauty and elegance, and detailed study of other great masters undertaken throughout his entire life. Much too might be credited to his familial circumstances and the legacy of an artistic, aristocratic household.

An artist whose work requires no complex explanations. One effortlessly feels the beauty and emotion in his every brush-stroke due to an exquisite talent and the ability to communicate without artifice such as manifested by only the greatest of artists.

Is also an occasion for sharing the beautiful world of a master with those who have long admired his creations, as well as a wonderful opportunity to introduce his marvelous, deeply personal career to unfamiliar viewers who may be seeking a contemporary aesthetic that is heartfelt simply in itself…an example of ‘true innovation’.

The first quality that calls one to admire the work of Arquer Buigas is its daring. “Daring? !”you might say, thinking this term does inappropriate for describing an exhibition in which we find women with shawls and carnations juxtaposed to sober portraits, everyday scenes appearing to be taken more from the imagination than from reality, sketches, children, old women, and numerous other bits of life that make up Arquer Buigas’ work.

However, if I have chosen the term daring, it is precisely because I admire his audacity in undertaking such oft-visited themes and then achieving a sense of novelty and originality.  I suppose that this achievement is the crucial difference between innovators and modestly talented imitators. – Carmen Posadas (writer)

Everyone is capable of admiring a sunset’s beauty, and many have the ability to capture its colors, but only an artist can reinvent what she sees so that it seems both familiar and new at once. This impression is exactly the one I have standing before the work of Arquer Buigas. ─ Victor Hugo

I ask myself what that rare quality could be, that of traveling a well-trodden path without ever falling into the trap of mimicry, nor being disproportionately influenced or paying tribute—the name plagiarism goes by these days.

I can infer that artists as disparate as Goya, Degás, Romero de Torres, Sorolla and even Vermeer and Rembrandt occupy a space in Arquer Buigas’ marvelous imagery, in his pictorial sentimental education, but their trace is faint, as only occurs in the work of the greatest masters.

Only an artist is able to portray life as it really is, because the others, the sorcerer’s apprentices, the mere aspirants to the category of genius, the extravagant professionals, barely manage to outline it or even falsify it. And there is ample life in the work of Arquer Buigas: come by and see if I exaggerate.