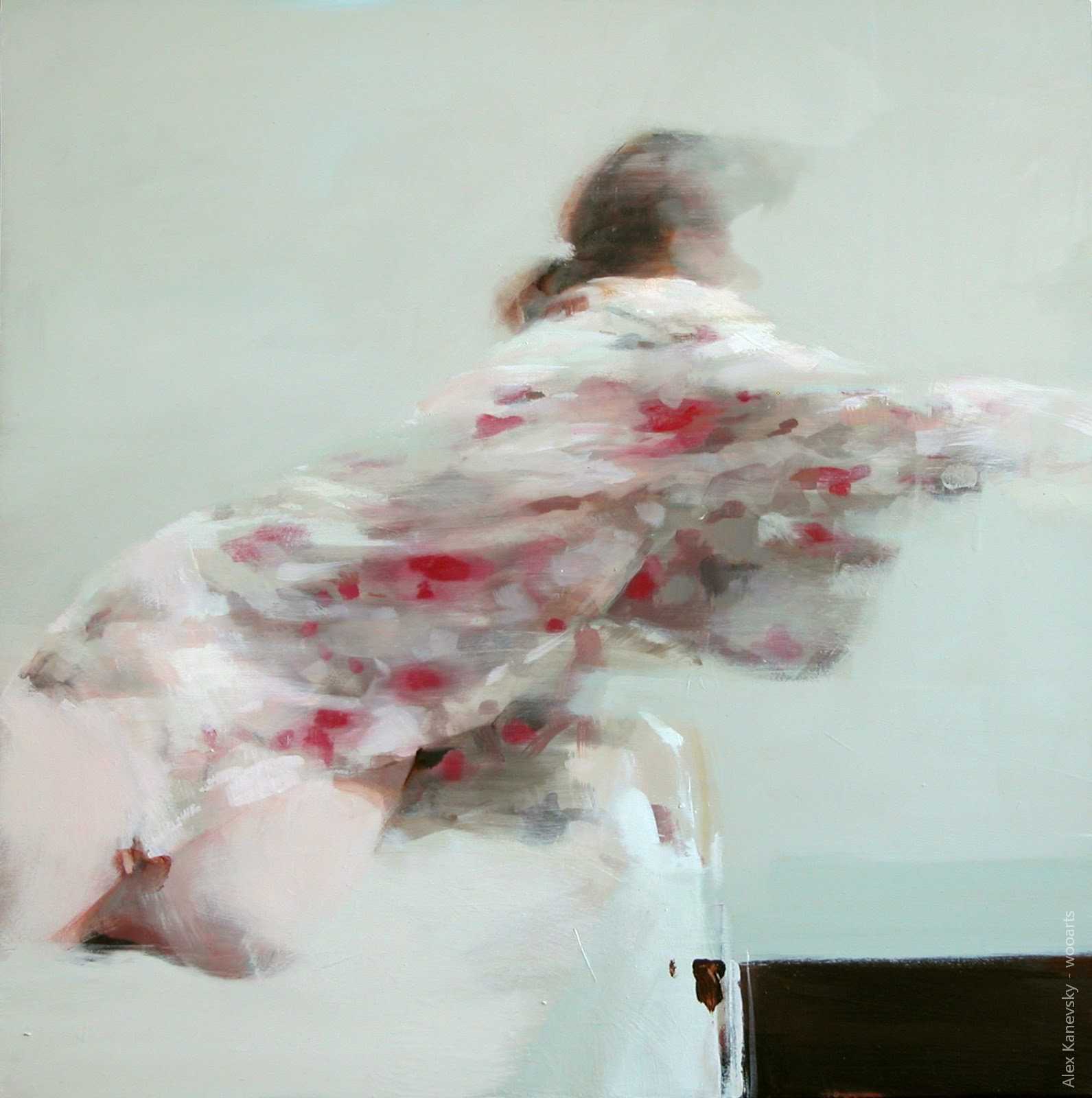 Virtuoso painter Alex Kanevsky captures movement and time’s constant flow in canvases that resist adherence to a single moment, or even a single reading.

Virtuoso painter Alex Kanevsky captures movement and time’s constant flow in canvases that resist adherence to a single moment, or even a single reading. Like the unreliable nature of memory and the imprecise atmosphere of poetry, Kanevsky’s multilayered works provide more questions than answers. These paintings combine abstraction and figuration in layered, painterly compositions in which the artist strives to convey his own personal and particular view of the world with “extreme clarity.” (1) This process produces compositions that shimmer with a kind of Futurist velocity, while at the same time capturing a serene feeling of stillness.

The figure is central to Kanevsky’s work. His figures inhabit mysterious landscapes and ambiguous architecture, often composed of wide swaths of color that contain echoes of color field painting. Most often, Kanevsky focuses on the nude, creating soft, tactile bodies in luscious flesh tones. He has “absorbed the syntax of modernist-or is it postmodernist?-painting,” adapting and molding art history to his own devices. (2) His landscapes pulsate with alchemical energy, shifting between the recognizable world and pure form and color.

Kanevsky describes himself as a slow painter who must nevertheless work quickly to maintain a fresh approach to the canvas. His process of painting, rubbing out, and painting over was developed over many years, and holds the key to the emotional richness of his work. This process creates a kind of palimpsest, in which past iterations and experimentations remain visible beneath the topmost layer of paint. Though Kanevsky paints both from life and from photographs, he relishes most the kinetic energy of live models. He often works with the same models for years at a time, developing a strong sense of their individual form and motion. Photography, on the other hand, allows the artist to step back from his own perception of reality and to discover alternate points of view. He particularly enjoys the imperfections that sometimes crop up through the photographic process.

Kanevsky feels a deep connection to art history, especially to the masters of portraiture Rembrandt and Velázquez. When asked about his own artistic influences, Kanevsky names a long and diverse list of objects, artists, writers, and thinkers. The influence of post-war figural painters such as Lucien Freud and Francis Bacon is immediately apparent in his moody, abstracted figures. The roots of Kanevsky’s color can be found in the work of Van Gogh, Seurat, and Richard Diebenkorn, among others. The artist also admires the work of literary greats such as Tolstoy, James Joyce, Wallace Stevens, and Ezra Pound, and finds an arresting beauty in the forms Japanese pottery and the colors of Scandinavian cinema. These manifold interests find their way into a body of work that is both compelling and mysterious.

Alex Kanevsky was born in Russia in 1963 and studied theoretical mathematics at Vilnius University in Lithuania before coming to the United States in the early 1980s. He settled in Philadelphia and began painting classes at the Philadelphia Academy of the Fine Arts in 1989. After receiving a Pew Fellowship in 1997, Kanevsky was able to devote himself to painting full time. He has exhibited his work throughout the United States, Canada, Italy, the United Kingdom, and Ireland, and continues to live and work in Philadelphia.