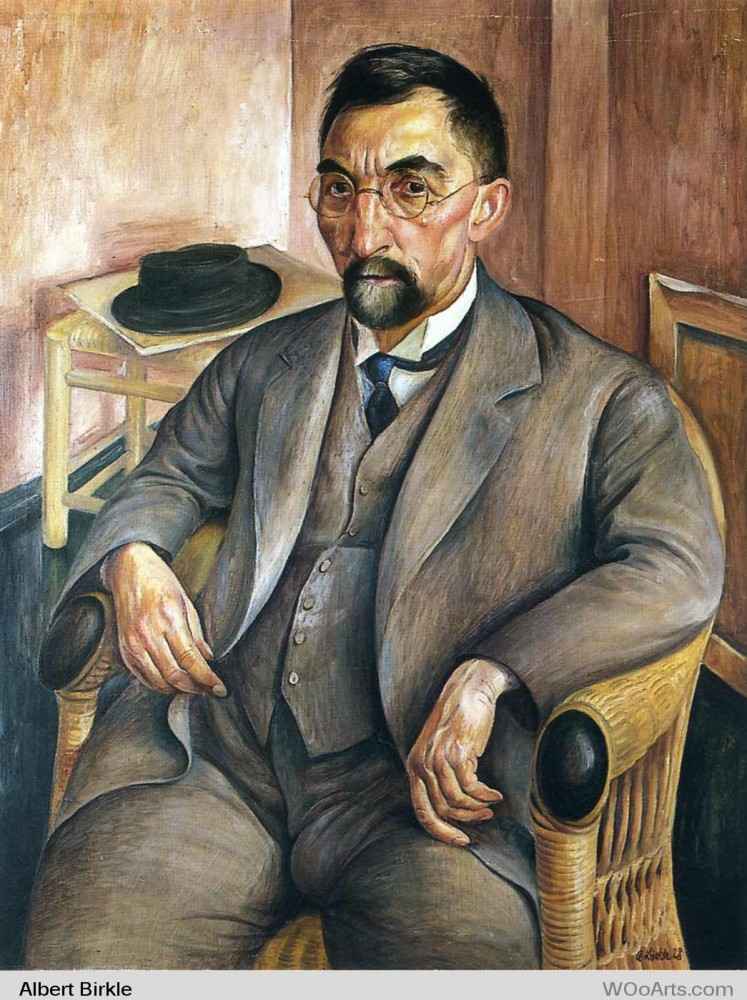 Albert Birkle was born in Charlottenburg, then an independent city and since 1920 part of Berlin. His grandfather on his mother’s side, Gustav Bregenzer, and his father, Carl Birkle, both were painters, originally from Swabia.

Albert Birkle was trained as a decorative painter in his father’s firm. From 1918 to 1924, he studied at the Hochschule für die bildenden Künste/College of Fine Arts, a predecessor of today’s Universität der Künste Berlin. Birkle developed a unique style informed by expressionism and New Objectivity/Neue Sachlichkeit. His subjects were lonely, mystic landscapes, typical scenes of Berlin of the 20’s and 30’s, such as scenes from Tiergarten Park, bar scenes etc., character portraits, and religious scenes. In his style of portrait painting he was often compared to Otto Dix and George Grosz.

In 1927, Birkle had his first one man show in Berlin, which turned out to be very successfull. he decided to turn down a professorship at the Koenigsberg Acadamy of Arts in order to continue to work independently as an artist and to dedicate himself to assignments in the fild of church decoration, where he had become a specialist. As National Socialism was on its way to power, Birkle moved to Salzburg, Austria in 1932. Nevertheless, he represented Germany at the Venice Biennale as late as 1936. In 1937, his artwork was declared to be “entarted”, his works were removed from public collections, and a painting ban was imposed on him.

In 1946, Birkle received Austrian citizenship. In the post-war year, he made a living painting religious frescos for various churches and doing oil paintings. In his final year, he more and more returned back to his Berlin themes of the 20’s and 30’s.

Colours in lamplight are previews,
scarcely eschewed as wave-length turbulence
tuned to closeness and friendship.
Colours in firelight are skin-warmed
glowings, harbouring contentment,
revealing intuitive insight.
Colours in moonlight are barely shown
shy smiles recalled with eidetic
intensity from reservoirs of sight.
Colours in candlelight are filigree
reflections, decorative shimmers
of sympathetic enchantment.
But in the hard light of day
they become flagrant solidities
that get in the way of our true feelings.
© I.D. Carswell