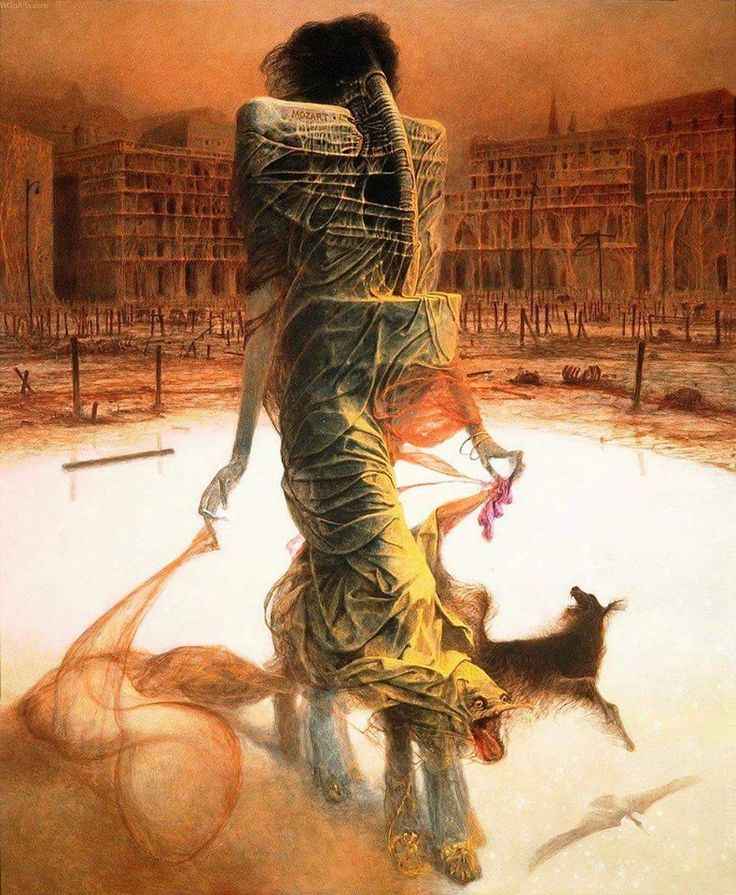 Zdzisław Beksiński was born in Sanok, southern Poland. He studied architecture in Kraków. In 1955, he completed his studies and returned to Sanok, working as a construction site supervisor, but found out he did not enjoy it.

During this period, he had an interest in montage photography, sculpting and painting. When he first started his sculpting, he would often use his construction site materials for his medium. His early photography would be a precursor to his later paintings often depicting peculiar wrinkles, desolate landscapes and still-life faces on rough surfaces. His paintings often depict anxiety, such as torn doll faces, faces erased or obscured by bandages wrapped around the portrait. His main focus was on abstract painting, although it seems his works in the 1960s were inspired by Surrealism.

Beksiński had no formal training as an artist. He was a graduate of the Faculty of Architecture at the Kraków Polytechnic with M.Sc. received in 1952. His paintings were mainly created using oil paint on hardboard panels which he personally prepared, although he also experimented with acrylic paints. He abhorred silence, and always listened to classical music while painting. Although he loved classical music, Beksinski also appreciated rock music.

An exhibition in Warsaw in 1964 was his first major success, as all his paintings were sold.

Beksiński undertook painting with a passion, working intensely and whilst listening to classical music. He soon became the leading figure in contemporary Polish art. In the late 1960s, Beksiński entered what he himself called his “fantastic period”, which lasted up to the mid-1980s. This is his best-known period, during which he created very disturbing images, showing a gloomy, surrealistic environment with very detailed scenes of death, decay, landscapes filled with skeletons, deformed figures and deserts. These paintings were quite detailed, painted with his trademark precision. At the time, Beksiński claimed, “I wish to paint in such a manner as if I were photographing dreams”.

Despite the grim overtones, Beksiński claimed some of his works were misunderstood; in his opinion, they were rather optimistic or even humorous. For the most part Beksiński was adamant that even he did not know the meaning of his artworks and was uninterested in possible interpretations; in keeping with this, he refused to provide titles for any of his drawings or paintings. Before moving to Warsaw in 1977, he burned a selection of his works in his own backyard, without leaving any documentation on them. He later claimed that some of those works were “too personal”, while others were unsatisfactory, and he didn’t want people to see them.

According to Mexican film director Guillermo del Toro “In the medieval tradition, Beksinski seems to believe art to be a forewarning about the fragility of the flesh – whatever pleasures we know are doomed to perish – thus, his paintings manage to evoke at once the process of decay and the ongoing struggle for life. They hold within them a secret poetry, stained with blood and rust.”

The 1980s marked a transitory period for Beksiński. During this time, his works became more popular in France due to the endeavors of Piotr Dmochowski, and he achieved significant popularity in Western Europe, the United States and Japan. His art in the late 1980s and early 1990s focused on monumental or sculpture-like images rendered in a restricted and often subdued colour palette, including a series of crosses. Paintings in this style, which often appear to have been sketched densely in coloured lines, were much less lavish than those known from his “fantastic period”, but just as powerful. In 1994, Beksiński explained “I’m going in the direction of a greater simplification of the background, and at the same time a considerable degree of deformation in the figures, which are being painted without what’s known as naturalistic light and shadow. What I’m after is for it to be obvious at first sight that this is a painting I made”.

In the latter part of the 1990s, he discovered computers, the Internet, digital photography and photo manipulation, a medium that he focused on until his death.

The late 1990s were a very tragic time for Beksiński. His wife, Zofia, died in 1998; a year later, on Christmas Eve 1999, his son Tomasz (a popular radio presenter, music journalist and movie translator) committed suicide. Beksiński discovered his son’s body. Unable to come to terms with his son’s death, he kept an envelope “For Tomek in case I kick the bucket” pinned to his wall.

On 21 February 2005, Beksiński was found dead in his flat in Warsaw with 17 stab wounds on his body; two of the wounds were determined to have been fatal. Robert Kupiec, the teenage son of his longtime caretaker, and a friend were arrested shortly after the crime. On 9 November 2006 Robert Kupiec was sentenced to 25 years in prison, and his accomplice, Łukasz Kupiec, to 5 years by the court of Warsaw. Before his death, Beksiński had refused to loan Robert Kupiec a few hundred złoty (approximately $100 USD).

Although Beksiński’s art was often grim, he himself was known to be a pleasant person who took enjoyment from conversation and had a keen sense of humor. He was modest and somewhat shy, avoiding public events such as the openings of his own exhibitions. He credited music as his main source of inspiration. He claimed not to be much influenced by literature, cinema or the work of other artists, and almost never visited museums or exhibitions. Beksiński avoided concrete analysis of the content of his work, saying “I cannot conceive of a sensible statement on painting”. He was especially dismissive of those who sought or offered simple answers to what his work ‘meant’.

The town of Sanok, Poland, houses a museum dedicated to Beksiński. A Beksiński museum housing 50 paintings and 120 drawings from the Dmochowski collection (who owns the biggest private collection of Beksiński’s art), opened in 2006 in the City Art Gallery of Częstochowa, Poland. On 18 May 2012 with the participation of Minister of Regional Development Elżbieta Bieńkowska and others took place ceremonial opening of The New Gallery of Zdzisław Beksiński in the rebuilt wing of the castle. On 19 May 2012 The New Gallery has been opened for the public. A ‘Beksiński cross’, in the characteristic T-shape frequently employed by the artist, was installed for Burning Man.

The unblack metal band Antestor used “The Trumpeter” as cover art for their album Omen. Antestor explained that they chose “The Trumpeter” because “Our music represents the more broken and monster-like feelings of our humanity, like the apparition in this picture.”
Beksiński’s works also inspired the surrealist imagery in William Mallone’s 2008 horror film Parasomnia.
Czech death metal band Pandemia used Beksinski’s artwork as the cover of their second album “Personal Demon”, released in 2002.

In 2016, Polish filmmaker Jan P. Matuszyński directed a critically acclaimed film Ostatnia rodzina (The Last Family) based on the life of Zdzisław Beksiński and his son Tomasz. The film won the Golden Lions Award at the 2016 Gdynia Film Festival.

Rishloo, an independent band from Seattle, released an album in 2007 titled Eidolon, which contains a song titled Zdzislaw. The song is believed to be a reference to him, as the album art seems to be influenced by his own as well as the imagery the album’s lyrics seem to create.

The Cursed Paintings of Zdzisław Beksiński

A decade after his brutal murder, Zdzisław Beksiński’s paintings hold the world spellbound. Is the universal fascination they evoke the result of their author’s own gruesome tragedies, or did Beksiński simply succeed at capturing the unsettling underside of human consciousness?

During his long career, Zdzisław Beksiński worked in many fields of art: sculpture, photography, graphic art, drawing, and last but not least, painting. All of Beksiński’s paintings are untitled – he wanted to avoid any metaphorical interpretation of his paintings. As an artist, Beksiński was fascinated with death, decay and darkness. But those weren’t his only fascinations. He was also known his interest in eroticism, abstractionism and Eastern mysticism. From the mid-60s onwards, he was very popular in Poland. In the 80s and 90s Beksiński’s paintings were exhibited abroad, amongst others in France and Japan, and he became an internationally recognized artist. His style is sometimes compared to that of Hans Giger, the Swiss painter who designed the extra-terrestrial creatures for the famous 1979 film Alien.

Beksiński, who was born in 1929, completed the Faculty of Architecture of the Kraków University of Technology. After working in construction, he started to work in his hometown, Sanok, as a bus designer for an automotive factory. In the 50s he became active as a photographer. Some of his photographic works are described as surrealistic-expressionist. One of his most famous photos, Sadist’s Corset, shows Beksiński’s liking for sadomasochistic themes. He eventually gave up on photography in the early 60s, because he grew disappointed with the limited possibilities of altering the images he captured. Photography seemed to constrain his imagination, so he turned to drawing and painting, fields which offered the possibility of ‘photographing dreams,’ as he put it. Before he devoted himself to painting and drawing, he also sculpted for a brief period. In this capacity he created several abstractionist reliefs. Painting would prove to be the medium best suited to his personal vision. After having had his first successes as a painter, he was fired from the bus factory in 1967. Afterwards he worked exclusively as an artist.

Beksiński paid little or no attention to trends in art – he had no intention of becoming a favourite of the critics. Instead he remained faithful to his dreams and obsessions, which in the end won him great popularity. In the 60s he created a number of sadomasochistic drawings. From the end of the 60s to the mid-80s he began working on his most famous period – his ‘fantastic’ series. The predominant themes in these oneiric works are hellish landscapes disturbing, nightmarish figures and grim, unearthly architecture. These made him a household name in Poland and brought him recognition abroad. After the so-called fantastic period Beksiński’s style changed and he entered a period he described as ‘gothic.’ The paintings from the gothic period represent deformed heads and less dreamlike figures, which display a specific plastic harmony. When computer editing of images became possible in the 90s, he was granted his wish of being able to add surrealistic alterations to photographs, and his career came full circle as he returned to his first medium.

Beksiński lived with his wife Zofia and their son Tomasz in Warsaw, where the three of them had moved from Sanok in 1977. In the capital the painter led a rather uneventful life – he spent most of his time at his apartment working, listening to music and watching movies. He didn’t like to go out, socialize or travel. Yet the series of misfortunes that befell Beksiński and his family caused the story of his last years to become very well known. In 1998 his wife died of cancer. A year later Tomasz, an esteemed translator and popular music journalist, aficionado of gothic rock, committed suicide. In 2005 the painter was stabbed to death at his apartment by his cleaning lady’s 19 year-old son. Beksiński, who knew the killer, had refused to loan the teenager money. Understandably, his tragic last years were often linked with the grimness of his art.

Many have been inspired by Zdzisław Beksiński’s art. In Poland his works influenced many rock musicians, and lately the creators of the point and click adventure video game Tormentum. The noted Mexican film-maker Guillermo del Toro, who directed the Oscar-winning film Pan’s Labyrinth, is a known admirer of Beksiński’s works. A Polish film focusing on the family’s life after 1977, entitled Ostatnia Rodzina / The Last Family is set to premiere in 2016.

The above article from culture.pl