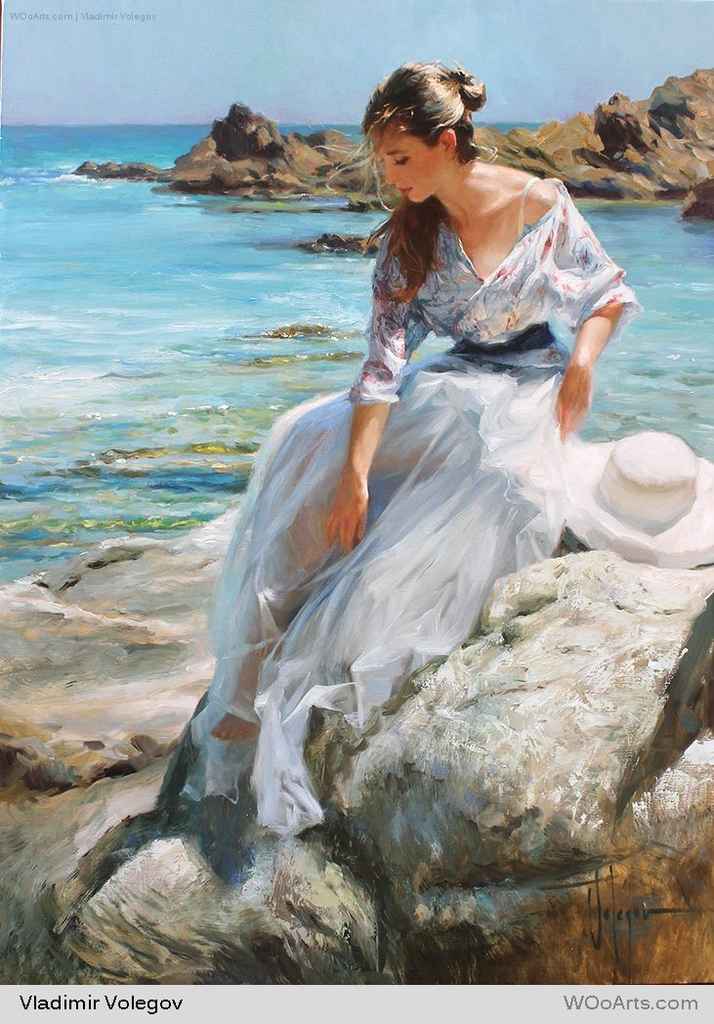 Vladimir Volegov was born in Chabarovsk, Russia. By the tender age 3, he was already experimenting with painting. His natural talent continued to be quite evident throughout his youth. Volegov attended Krivoj Roj for his art education, and after completing his military duty he was admitted into Lvov Polygraphic Institute in the former Soviet Union. By 1984, he was participating in International Competitions for poster art. He won many of the competitions he entered.

In 1988, Volegov moved to Moscow, and is career in commercial art was thriving. He began to be approached by prominent Russian publishing houses with job opportunities designing various media. While this was officially what he did or employment, he continued to paint and participate in exhibitions. Vladimir started to travel throughout Europe in 1990. He made his living painting portraits on the streets of Barcelona, Berlin, Vienna, and many other European cities. Since that time, he has been mastering his skills painting human forms.

After having attended the art school, “Krivoj Rog” and having served in the army, Vladimir was admitted to the lvov Polygraphic institute in the former soviet union. Beginning in 1984 vladimir began participating in, and winning, international competitions for poster art.

Vladimir Volegov moved to Moscow in 1988 and before long Vladimir’s career in commercial art was in full swing. Notable Russian publishing houses sought his talents to design posters and cd and cassette covers for musical groups. While working with the publishing houses he continued to work on his paintings and participate in exhibitions.

In 1990 Vladimir began traveling to Europe where he earned money by painting portraits on the streets of Barcelona, berlin, Vienna and other European cities. It is with this experience he further honed his skills in depicting the human form. Over the past fourteen years, his art has evolved into the striking figurative work he creates today. Vladimir’s vibrant color palette and bold strokes coalesce to create evocative images that possess a timeless sensibility.

What style of painting is this work by Vladimir Volegov?

by David Kasman, Sculptor, Painter, Engineer. Updated Jun 2, 2015
The painting by Volegov that you reference shows the clear influence of the Spanish painter Joaquín Sorolla (1863-1923). Sorolla invented this “style” which, though his own, could be thought of as a fusion of impressionism, luminism and broadly-painted, but technically exceptional, “bravura” painting.

To be fair, I would not say that Sorolla invented a “style” but rather that it was the resulting product of his painting philosophy: “Ever since I began to paint’, he confided, ‘my obsession was to destroy all conventionalism”. (Sorolla’s quote from The Painter, Joaquin Sorolla by Edmund Peel)

As his good friend Don Pedro Gil explained: “he (Sorolla) did not believe in school, studies, museums ‘or the like’ for art students, nor approve of their learning by copying the works of others.

He insisted instead that they ‘get out and get busy’, and paint directly from nature under its different conditions of light, saying that a studio is ‘a good place to smoke’, and a museum a ‘good place to walk’. ” (from The Painter, Joaquin Sorolla by Edmund Peel )

Many painters have imitated or borrowed elements of Sorolla’s idiom, but none have been his equal, in the “style” that he invented. Sorolla may appear to be “just another sentimental impressionist”, but look harder … his paintings are fierce, bold and direct.

They are the result of keen observation and experimentation. They exude a kind of freedom, confidence and creative bravery that doesn’t typically exist in representational paintings.

I just love this Russian painter’s work! I discovered him on YouTube and subscribed immediately, as I love his vibrant paintings, his dexterous techniques of bold brushstrokes and his sensitivity to his subjects. I want to share this talent with you today – just in case you haven’t heard of him! I hope his work.