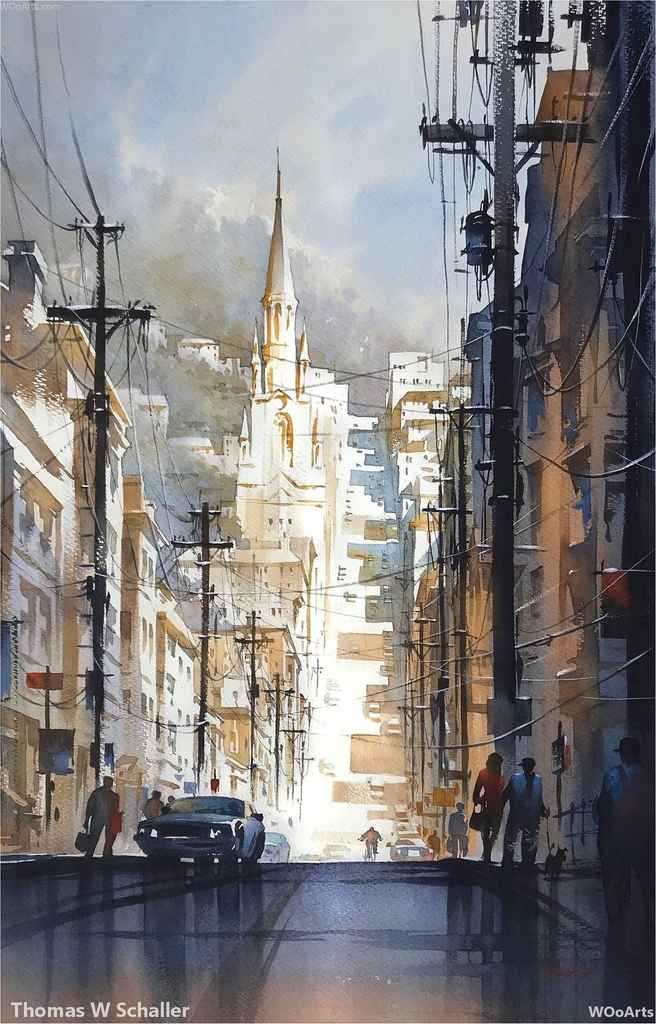 All art has some story to tell. And in my work – far more than any specific object or space – it is the narrative of light that is always the focus. While I love to paint cityscapes and buildings, I have found that it is the often abstract dialogue between – and the collision of – the natural and the man-made worlds that makes the most compelling subject matter for me.

The fascinating ways in which buildings interact with the sky and the landscapes where they are placed form countless surprising and beautiful compositions of positive and negative shapes – rich darks and sparkling lights.

As an architect, I was trained in the strict Beaux-Arts methods of watercolor application; but as a fine artist, I have grown to love the integration of those formal techniques with the freedom of much looser, less controlled, and expressionistic methods. It is my goal to paint quickly, drawing on emotion and sense memory – finishing a painting all in one go.

When finished, I like my watercolors to still look as if they are wet.

In many ways, I see watercolor as a natural extension of the intuitive act of drawing. But rather than using a line formed by pen or pencil, in watercolor, I draw using shapes – shapes of value – shapes of shadow and light.

“A few years ago , a great artist asked me what I wanted to do with my life. I told him I wanted to be a painter – a “real artist”. But then I proceeded to detail all the reasons I had constructed that seemed to make that dream impossible. He listened politely to all my excuses and then said simply:
“If you want to paint – just paint. All the rest will take care of itself”

My life changed that day – and slowly, I began to change too – from the inside out. At the time, I lived in New York City and worked as a commercial architectural artist. I had developed a deep well of technical skills, yet I spent my days painting the visions of others – not my own.

But within five years, I quit my business life, and relocated to the seaside in Los Angeles to pursue the life I knew was always meant for me. The same great artist also said something that has proven itself to be more true every day of my life – “You don’t chose the life of an artist – it chooses you”.

I have been in love with the medium of watercolor always as it’s ability to be a vehicle for the unique voice of the artist is astonishing. When asked to label the type of work I do, I usually describe my paintings as ‘interpreted realism’. For while I paint very little that is not deeply informed by direct site observation, none of what I paint is strictly ‘realistic’. I believe that it is my job as an artist not to paint what I see so much as how I feel about what I see. The actual inspiration I receive from my subjects is the real subject of my work.

I was raised on a farm in the American Mid-West, spent much of my life in Manhattan, and now live under the vast skies near the sea on the West Coast of California. And I have been fortunate enough to travel much of the world.

And as are we all, I am deeply affected and influenced by my physical surroundings – by the dense built environments of the urban landscape as well as by the unspoiled natural landscapes of our beautiful planet. And I gain much inspiration as a painter when and wherever these two worlds collide – as they so often do.

All art is a form of story-telling and I believe that good art asks more questions than it answers. And so it is often in this clash between the architecture of man and the architecture of nature , where I gain most of my artistic inspiration. It is where the most compelling questions can be asked, and where the stories I wish my art to tell can most often be found.

It is my personal goal as an artist that my work also succeeds as an invitation to you to enter the world of my paintings where I hope you are moved to ask your own questions, and begin to tell your own stories.
I’m so grateful to you all for spending some time with me and my work. Thank you so much.”

Following a 20-year career in New York City as an architect and architectural artist, Tom Schaller is now based in Los Angeles, California where he devotes himself full-time to artwork in the watercolor medium.

He has long been considered one of the foremost architectural artists in the world. In the field, he has won every major award for his artwork – including being a two-time recipient of the Hugh Ferriss Memorial Prize.

He has authored two books ; the best-selling, and AIA award of merit winner, Architecture in Watercolor, and The Art of Architectural Drawing. He is increasingly in demand internationally to conduct his watercolor workshop series, “The Architecture of Light” : also the title of his next book currently in progress.

Mr. Schaller is a Signature Member of the AWS, NWWS, Artist Member of the California Art Club, and President Emeritus of the American Society of Architectural Illustrators. Tom is a member of a great many other professional arts organizations as well as a founding member of the group; North American Watercolor Artists.