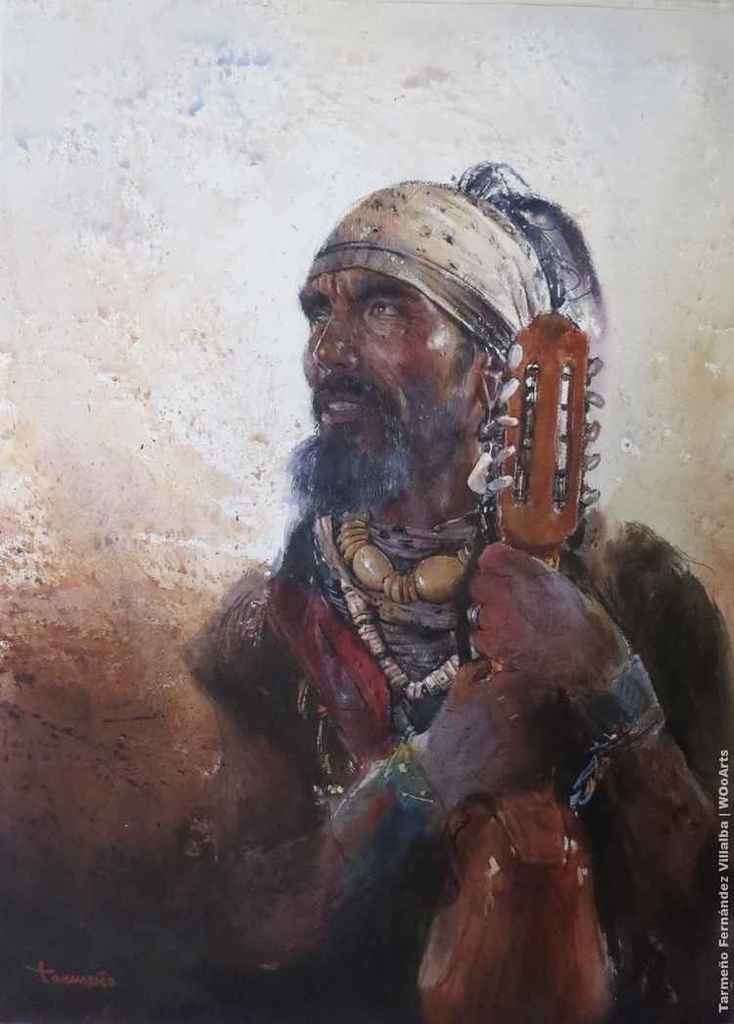 Tarmeño Fernández Villalba: “In the artistic endeavor, I try that the paintings that I develop are sensitive to the human situation in all its forms, especially the marginal, marginalized men. What many do not want and do not want to see, the disinherited who fight for a dignified life without being exploited and free from more and more violence.”

Tarmeño (Jorge Fernández Villalba) currently resides in a coastal town in northwestern Peru called Tumbes. Tarmeño studied at the School of Fine Arts in Lima and spent many years painting in Ecuador. He has also received more artistic training in the private workshops of teachers Walter Carreño (Tarma 1979-1981) and Leonel Velarde (Miraflores 1982-1983). Tarmeño was born in Tarma, Peru.

Tarmeño works particularly features of the face, muscles and all anatomical details in a very particular way, skill that allowed him to participate in several exhibitions in Lima. His work was not only appreciated in Peru, he also crossed borders to Ecuador, where he traveled and got involved in projects of an artistic and social nature.

“From 1980 I presented myself with my works in galleries, salons and painting contests; Some were rejected, others were scandalized, but I was also accepted and sometimes rewarded, are experiences of every painter.”

In 1996, he was invited to Ecuador by the NIMA Foundation, where he painted and learned to know the life of the children of the street of Guayaquil. There, he was the creator of the painting workshop ‘Tarmeño’, which became an important instrument to educate and rescue the children and young people of the street, as well as being a way of escape from the sad reality they lived.

In 1997, it illustrates the first public aquarium in Ecuador, located in the millennial community of Valdivia. In this period he learns to handle acrylic. Later, he begins to work inside the Center of Social Rehabilitation of Guayaquil (women’s prison), where he makes available her artistic skills in social assistance projects.

Recently he also worked sharing drawing and painting with the adolescents in Guayaquil’s Juvenile Correctional Center. Tarmeño is recognized above all in the world of Peruvian, Ecuadorian, Colombian and Mexican painting. Lately they transcended their watercolors to the rest of the world by the prizes in the International Watercolor Society (IWS) and their trip to Turkey to the International Festival of the same institution. He Won the First Place of the Prize of the Jury of the Artists.

The whole of his social and equestrian work, demonstrates his personality and sensitivity: “Perfectionist in his technique, human in his eyes and faithful to his choices.”

As a child I met the horses among other animals accompanying my father when he worked in the fields of his native Palca. In the 80’s, my Art student years, I visited Tarma’s countryside to draw horses, cows etc. In the 90’s looking for ironworks in disuse in the stables of Huachipa-Lima I saw them in their natural habitat that inspired me to paint some oils.

And from 2007 in Quito-Ecuador I painted them in watercolors of large formats, rediscovering the horse in its broadest sense. When I have the opportunity to paint them, each session is a learning to try to capture the beauty of these noble animals in their anatomy, color, race, grace and dynamism. The majority of paintings that are appreciated are: 1.20 x 90 cm. Some are 76 × 56 cm.