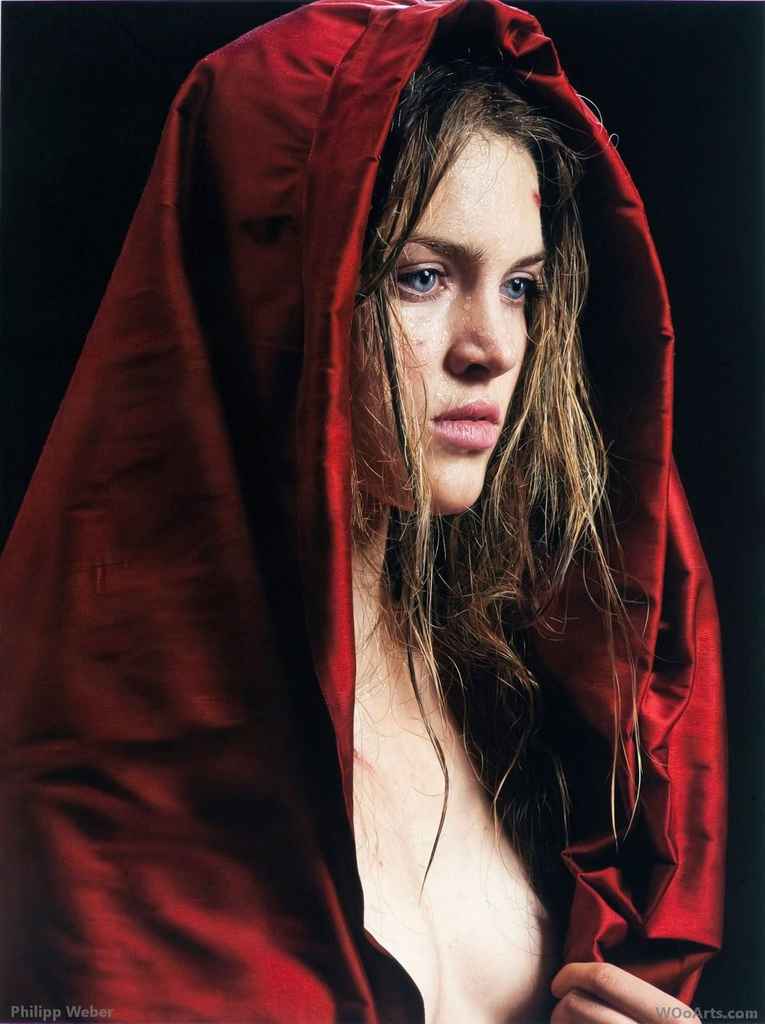 THE PAINTING OF PHILIPP WEBER

The canvas: 160 x 220 cm painting area, primed, virtually blank, only the outlines indicate where the painting adventure is destined.

The first layers of the underpainting form the basis. With finest brush the picture is built up centimeter by centimeter. Layer overlaps layer, fragmentary areas evolve into identifiable details; the overall form becomes gradually visible. Paint is applied over paint again and again until the desired intensity is achieved.

Days and weeks pass by; practically Zen-like is how Philipp Weber experiences this process of painting discovery – there is no outside prior to the inside, the world in this phase is a one-way street. In our fast-moving times this is a precious commodity for the artist, because Philipp Weber can only paint pictures of such explicit purity with unlimited time. Without any compromise. Flawless!

Then the day dawns when the whole work becomes discernible. The picture seems complete. Yet apparently, because where friends and colleagues pay tribute to the picture, for perfectionist Weber a hint of scepticism always remains.

Could one not have painted it even a little bit better? A hair here, a contour there? Indeed no, then seldom has a young artist managed in a few years to utilize painting with such sovereignity and virtuosity like Philipp Weber. Each brushstroke precise, the skilful use of pigments opens up all artistic potentials.

Figurative painting is undoubtedly his strength, the archetypal striving for the artist. In his thematic cycles he convincingly articulates his and his generation’s feeling for life, as well as his interpretation of that what our world is alike.

Like other realists Philipp Weber also only allows his stroke to be conjectured – gesticulatory painting does not conform to his philosophy of artistic implementation, its hyperrealistic type of presentation should concentrate the observer’s look on the motive without any kind of distraction.

Philipp Weber’s paintings are unique, original and fresh. And looking back at older art history we only rarely detect borrowing, hardly any allusions. The artists interpretations stem from our contemporary media. Only certain earlier works give rise to recollections of baroque splendour in silks and satins.

Female clichés feature strongly in Philipp Weber’s painting: the fairytale-like (Princesses), the football fan jollifying (Cheerleaders), the inapproachable (The Hunt) and the theatrical (Red Sunset). Concurrently his work generates areas of tension between reality and the artificiality, staging and identity.

From the distance this painting elicits the depictive aesthetics that characterize the world of advertising and fashion, Seen closer, however, it devulges more recondite insights, reveals underlying layers. The texture of the actualization communicates sensuous presence; the skin of the female body is alive, it almost seems to be breathing. Moreover, and this surprises, the perfect bodies display birth-marks, pores and veins. The painter Philipp Weber travels below the skin of his models and releases the gaze with it on longings and great dreams.

The eternal-female / Draws us upwards. This verse from Goethe’s Faust II may well be one of the most frequently quoted lines in German literature. It is a word mark of the idealization of the feminine by the masculine.

But Goethe was by no means the first to make the woman one of the centerpieces of the fine arts. Its history is pervaded by the depiction of the female body: moralising as biblical figure, mystical as literary dream, militant as allegorical heroine and dangerously tempting as Femme fatale. And naturally as bait for the advertising industry. The female is forever the perfect screen for the dreams of the spectators.

His pin-ups, however, delight in carnal lust that would hardly be tolerated in today’s advertising scenario. The subject of the perception of woman in advertisement and public used by Ramos finds parallels in the work of Philipp Weber. The formal approach, however, rather brings to mind Franz Gertsch, who since the seventies has utilized a painterly blow-up process by transposing everyday snapshots and portraits by brush onto canvas.

By the use of the large format, Gertsch, like Weber, compels the observer to distance in order to appreciate the content of the picture. But upon closer inspection, the works differ considerably: whereas with Gertsch the gesticulatory alla prima painting is prominent, Weber surprises with a singular sensuous presence that he achieves by his glazing painting style.

Furthermore, he clearly upholds the presentation of the sub- stance of his pictures and is thus not least stamped by the approach of his generation.

Worthy of mention in this connection alongside Jeff Coons are the exorbitant pictorial worlds of David LaChapelle with his glamorous photographs and music videos. His ever sensually presented places and protagonists disclose a multitude of quotations from culture and movie history.

The works by Philipp Weber oscillate in the field of tension between such artistic styles. His artistic altercation is determined by realism and pop, presentation and the attempt to capture an innermost spirit – and focus is always on the portrayal of the woman. Beauty captivates – it opens up outlooks, arouses attention and optimally curiosity for the second look, states Philipp Weber. And indeed it is this second look that Weber’s work provokes; a look that lays bare dichotomies.

Philipp Weber’s picture subjects are created at photo shooting sessions with professional models. The deportment and pose of the women are specified directly by the artist – however, the decisive moment for the artistic interpretation lies within the non-presented.

It is a moment of stillness during which the pose adopted remains purely extrinsic behind the model’s facial expression, the aura of the woman. It is the endeavour to capture a person’s reality that lies beyond that which is manifest. And by including the names of the woman in the picture title Philipp Weber underlines this aspect.

Consequently the models do not freeze in their function as objects of consumer society, but undermine the presentation and find themselves as real human beings in a staged environment. In a manner of speaking a humanization of the objects occurs.

Moreover in Philipp Weber’s works the culturally moulded ideal identity of female functions contrasts with the vehemently ruptured reality, which fluctuates between naturalness and the faked: princesses glide through sombre, undefined places, are banished to cloud castles in a fantastic hortus conclusus (Princesses – Tatiana and Sabine).

Cheerleaders hold melancholically next to each other (Cheerleaders 4 – Stephanie and Nina), kiss each other almost with benediction due to the onerous task of cheerleading, appear rather lost in rooms far away from any conviction of victory (Cheerleaders 5 – Nina). Elves are carried on dragonfly wings to the world of Peter Pan and huntresses (The Hunt – Ulrike) stylishly span their crossbows against a background that rather resembles the sfumato of an ideal Poussin landscape than hunting grounds of life and death.

The search for clarity and any outward references leads us back to square one. The protagonists in Philipp Weber’s pictures are always enshrouded in melancholy, which on the one side underlines the beauty, but on the other also edges them into a sphere of inaccessibility.

With all acknowledgements to realistic portrayal, these characters radiate magnified symbolic power and an atmospheric intensity that is also found with the Pre-Raphaelites of the 19th century. In a similar fashion Philipp Weber situates his models in mystical worlds that are suggestive of myths from both cultural history as well as from the contemporary illustrative scenario.

This in turn leads to another essential aspect of Philipp Weber’s painting: time. In particular the highly dramatic series Red Sunset (Red Sunset 3 – Nadine with gulls) where one can well imagine being witness to a movie scene from a remake of Hitchcock’s The Birds. Other paintings also convey memories of familiar movie moments (Cheerleaders 1 – Stephanie and Nina).

Action and stories are implied in the picture, but released from any possible context, they remain suspended and are frozen in time.

The time aspect is also evident at a different level. Formally recalling the aesthetics of advertising and fashion photography, Philipp Weber’s painting unleashes its subject from today’s fast-moving picture production and consumption, only then to banish it unanswered into a small eternity with a glazing painting technique that develops over months.

German painter Philipp Weber tells the stories that move him, using a hyperrealist style. Realism, pop, composition and an attempt to find an inner truth determine the artist’s approach, which places women at the heart of his cyclical works. Like Mel Ramos, Philipp Weber depicts the artificiality and the clichés of the fashion and advertising world.

His young women pose as if for a photo shoot for a glossy magazine, providing a blank canvas for men’s dreams, thus picking up on a traditional artistic theme.

But Philipp Weber shows more than that: he brings his models to life, releasing them from the artificiality and rigidity of the master image, going under their skin, exposing irregularities in apparent perfection and revealing aspirations and great dreams.