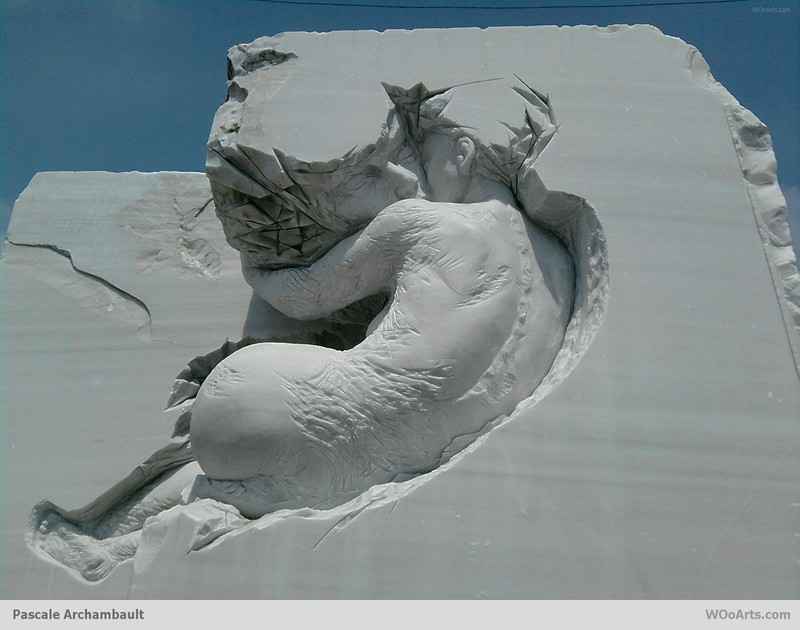 Since 1976, Pascale Archambault experienced woodcarving, ceramics and stone carving, eventually devote almost exclusively to the latter. Archambault’s art is figurative, represented in its entirety or in fragments, plays a decisive role. Peppered with references to the history of sculpture, her works reflect social considerations concerning, acts of violence, contemporary conflicts and, in contrast, the pleasures of life. Her plays constantly oscillate between two contradictory poles: one, euphoric connotations, focuses on the beauty, wellness and desire, the other closer to the dysphoria, shows the ugliness, anguish and suffering .

Archambault’s production also alternates between monolithic sculptures and assemblages, often involving a fragmentation of the body. It includes ronde bosse, facilities and reliefs whose syntax is based primarily on the movement and the obliquity of the volumes, which often oppose horizontal and vertical volumes to form pyramidal structures. Archambault also attaches importance to the texture, chiseling, polishing surfaces or leaving raw, depending on the desired effect, in relation to the content.”

Pascale Archambault was born in Quebec, Canada, in 1960. Archambault produces a very expressive figurative art juxtaposing materials in narrative and theatrical installations. Since 1982, the work of Pascale Archambault has been presented in numerous solo and group exhibitions, both in Canada and abroad, and his works are part of important public and private collections. These monumental sculptures made mostly at international meetings are exhibited in Quebec, Argentina, Uruguay, Korea, France, Brazil and Guatemala.