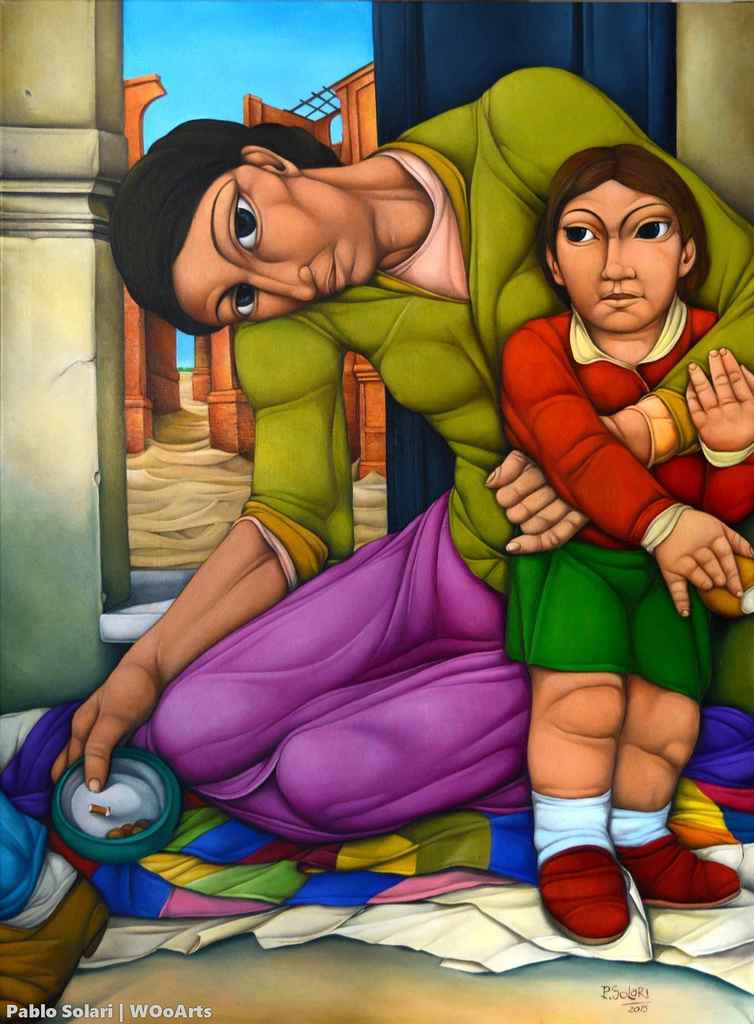 Pablo Solari was born in April 1953 in the neighborhood of Flores of the Autonomous City of Buenos Aires. From a very young age he began to paint and throughout his life has evolved as an autodidact, studying the classics and the basis of reproductions. He lives in Buenos Aires and part of her life was in Mendoza; he traveled to Italy to study in person to their teachers, Giotto, Fra Angelico and Miguel Angel. Today he is a man that is in his artistic maturity; simple, humble and with strong values, this artist is definitely in a position of being embodied.

In 2003 he traveled to Arequipa, where he studied the harvest season in different mills of the area. During the harvest season and the vineyard of each place , he has a print and dumps into the canvas with a technique worthy of the great masters.
Throughout his career was involved in the study of different techniques such as Tempera, watercolor, drawing lively, advertising, cartoons and comics. Which incorporate multiplicity of points of view to his work.

With a great drawing technique, the majority of his work is supported in oil on canvas; the blue overseas is one of their favorite pigments. He not perform previous sketches on canvas because makes him feel “limited” or “tired”, it is not within their interests the reproduction of copies of their works. Prepares the canvas with 7 or 8 mixing layers, prior to painting.

He has the sketch in his mind and begins to paint, from 7 a.m. to 6 p.m. daily, the works that takes and leaves for a while are hidden for not getting tired of seeing them, when he returns to complete them the desire of it remains intact. Solari makes permanent reinterpretations of the social issues, he does not consider that have had “stages”, paints what he has in mind at that moment.

Well we have within his work: field situations, zafra, vineyard, religious thematic, city, football etc. But always in each work he leaves a very small area between the tumultuous representation where the spectator will find a “clear” that complete the situation; either a river, a field, a construction site, a public transport etc. Uses a palette and high saturated, playing and creating a unique and original range of colors for each work, after completing the work applies the black shadow “I use not to do that, when one is novice and insecure covers the whole composition of shadows for not risking much”.

He is a carefree in the use of the technique, sure of what he wants to do, and when it paints he does it with care, affection and vocation. Took classes with the teacher Osvaldo Dubatti and Roberto Tessi.
His stages of production: He has works made in tribute to Berni, Van Gogh and Rivera.
Produces works throughout the year and does not follow a series or default stage.

Analyzing ancient works of this artist, it can be detected the great technical evolution and aesthetics but cannot be differentiated stages. Its great theme is the social realism understood, not as a criticism, but rather as a reflection of what we see daily in our daily lives.

Sunday, July 28, 2002 – Buenos Aires Herald Art on Sunday Solari: the spirituality of this day and age – By Marjan Grothuis
For Pablo Solari, a self-taught artist in his late forties, it is the first time that he has a solo exhibition in a gallery. It has been very successful as most of this painting was sold and future projects, like exhibitions and commissions for other works, are being planned.

Striking are the colours of his works. They are bright and strong, sometimes even fluorescent. Solari says that he usually takes one colour, like blue or green, and uses it as point of departure. Then he makes it comes back in all its different hues and distributes these carefully to achieve a harmonious whole.

The way the artist juxtaposes the colours is also remarkable. More often than not the figures he portrays are dressed in, for example, a canary yellow jacket white a blue shirt underneath an a pink shawl around the neck while the next one might be wearing sometimes in bright red.

Maybe it sounds like too much of a good thing, but the overall effect is perfectly in order as the work ‘Virtual Generation’, a homage to Berni’s painting ‘Chacareros’ from 1935, shows. Possibility more surprising is that Solari used to make black and white drawings, two of which are also on show at the exhibition, and introduced colours only much later on in his works: Now I love them and enjoy playing whit them!

Special as well is the way in which the scenes and figures in his painting are cut off at the edges reminding the viewer of photographic snapshots. Solari says that this is due to the fact that he sees his works as part of a mural and that if they were put together it would fit and make a whole.

He admits to being a great admirer of murals in general and that ones of Michelangelo and the Mexican artist Siqueiros are among his favourites. In fact, Solari executed a mural himself in the cathedral in Cuzco in the late eighties measuring three by four metres with another one in the planning for the cathedral of Chapi, also in Peru, for next year.

Solari says that he never went to an art academy although his parents had no objections to it whatsoever: they were the kind of people who stimulated the talents of their children, but I was not interested. I had been to quite a few privates studios when I was younger and preferred to copy Italian and Dutch masters like Caravaggio and Vermeer.

The practical approach is what I like best, just drawing a lot. It can easily be said that my work is based on drawing. The artist adds that it was time for a change when his drawings became too realistic: in my opinion photography can take care of that because I am not interested in portraying reality. I prefer searching for and conveying the spiritual element of things.

Solari tries to reflect today’s reality in his paintings: I see what it is like nowadays and I am, like so many others, affected by it. Still, in a work of art I can only incorporate part of it. Titles like ‘Breakfast on the pavement’ and ‘Those without work’ make his position pretty clear. Solari says that the last one actually refers to the time when he himself lost his job in 1996, but that after overcoming the initial shock, he decided to become a full time artist.

Tipically, the figures portrayed in his paintings do not have eye contact with each other and even the viewer is often left out. They look the other way, are lost in thought or have their eyes closed. Solari says that this is because of the growing individualism in Argentina with people just fending for themselves.

The exception, however, are the children he portrays. Their big eyes are staring at the viewer, asking for food whereas the parents accompanying them seem to be resigned to their fate. Interesting as well is how the people portrayed in his work resemble each other, their eyes the same shape.

The arc of the eyebrows and their mouths are similar. Moreover, they all have lots of creases in their faces, in their hands and their clothes, reminding one of the principles of cubism. The artist says that he is not interested in portraying certain people: I imagine them, they are prototypes and I am more interested in the feelings they are able to convey like sadness, resignation and hope.

The last feature in Solari’s paintings catching the eye is his use of classical elements, like a triangular structure as the basis of the composition and landscape in the background, just as in 16th and 17th century paintings. Nevertheless, Solari’s works of art are firmly based in this day and age and tackle problems of today’s world and today’s Argentina without falling into the trap of sentimentality.
Marjan Grothuis

Some recent exhibitions by Pablo Solari

Autodidact from the age of 4 years; at his 22 was related to a sculptor that purified his technique in drawing; a whole year working with Osvaldo Dubatti refined the discipline in painting. Three years spent in Mendoza city with his seminarian brother, where produced many of his religious tint works.
Studied the Mexican muralists for a contest that was opened in 1976, with the intention to take advantage of a wall available in the city of Buenos Aires. Between the years of 1999 and 2001 lives in Mendoza and internalized in the production of wine and its people.

With traits of Mexican muralist and Carpani this artist has a original compositional imprint, its colors do agree to someone, but it is not. These features described above makes his work friendly and admirable. The audience is amazed and captivated by the colors of the compositions, the large size of the parts helps to generate this feeling , nothing is outside; grab the color, the composition moves and the magnitude of the work is impressive, anyone who has been compared to a work of Pablo Solari will give account of what we said.

It is a great artist of our country that produces for people, not for their peers. Have works of him personalities and institutions such as Carlos Pedro Blaquier, Susana Gimenez, Mauricio Macri, Julio Camsen , Dr. López Mato, Marité Salvat, INCAA among others.
In addition private collections of Chile, Brazil, United States, France, Switzerland, England, Spain, Thailand, Australia and Peru have work of this artist.

The artist plans to show his work in Argentina, in different public and private spaces, as well as presented in major events on the outside and biennial of contemporary artwork. The objective for the next few years is that his work is positioned in Latin America achieving tour several countries and be a one more exponent of Latin American culture throughout the continent and in Europe.