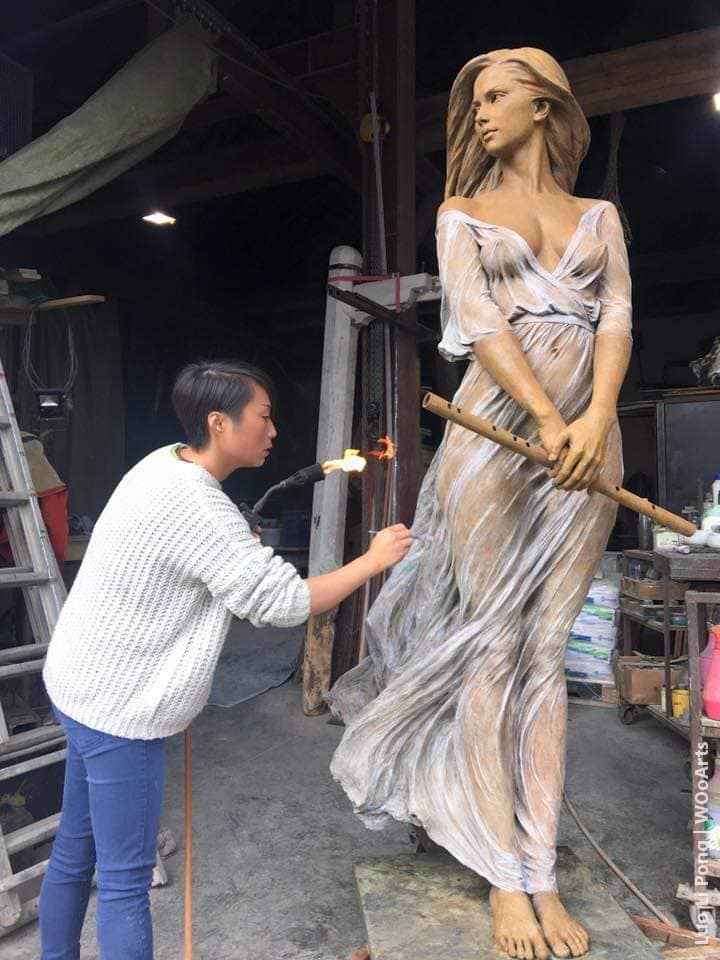 We could admire for hours on end Luo Li Rong’s contemporary sculptures! Luo Li Rong is a Chinese artist living in Belgium; she began sculpting early, so it was no surprise that she excelled during her studies at the Beijing Academy of Fine Arts (CAFA), where she worked mainly with figurative sculpture. She is also a member of the studio of the great artist Zon Jiabao. Although influenced by the great masters of art history, her work is perfectly contemporary.

The artist is mainly inspired by European Renaissance and baroque artists. We can easily recognize the graceful female bodies, the fluid drapery that embraces the skin as if it was wet, characteristic of Renaissance sculpture.

Her creations are not mere beige or brown sculptures, nor are they clay sculptures like they may seem… No, they are bronze masterpieces. They are realistic, but the women depicted seem to come from another world, a higher dimension. They are perched on clouds, hold raindrops in their palms and the wind seems to blow their long elegant dresses. They also impress by their presence since they are most often full-sized.

Like Auguste Rodin, the artist chose to work with bronze. She tries to get as close as possible to her model and wants her work to “become one with the model she imagines”. That is why her pieces are so detailed.

Luo Li Rong’s remarkable works of art have won her numerous public commissions, the most notable being a commission for a monumental statue for the 2008 Olympic Games in Beijing.

Rong was born in 1980 in Hongqi[disambiguation needed], Hunan province, China.

In 1998, Rong entered the Changsha Academy of Arts in Changsha, Hunan and studied with Xiao Xiao Qiu. From 2000 to 2005 she studied sculpture at the CAFA (Central Academy of Fine Arts in Beijing, China) with Sun Jia Bo. In 2005, she graduated with honors. While at the CAFA, Rong participated in multiple public sculpting projects including a sculpture installed in 2003 in Da Lian Park for the 2008 Olympic Games in Beijing.

Chinese artist Luo Li Rong produces realistic sculptures that convey the beauty and grace of the human figure. Working primarily in bronze, her life-size creations feature women in motion. They strike elegant poses that elongate their bodies with a seemingly windswept appearance; their hair and clothing look as though they’re being moved by a gentle breeze. This creates a compelling dichotomy; while there is an impressive dedication to realism—Rong is careful to detail each delicate fold of the skin—there’s also a fantastical element to her work, as her characters reside on clouds and hold raindrops in their hands.

Rong has pursued sculpting since an early age. She studied art at the Academy of Fine Arts in Beijing, then under the tutelage of sculptor Wang Du, and later she “immersed herself” in figurative sculpture techniques used by European artists in the Renaissance and Baroque periods. Their sense of femininity plays a defining role in Rong’s contemporary works, and the stylistic guidelines help carry on the tradition of realistic sculptures in art.

Luo Li Rong is a Chinese artist who lives in Belgium for several years now. At a very young age she began sculpting and she studied art at the prestigious Academy of Fine Arts (CAFA) in Beijing. When she graduated, she was honored and became a member of the workshop of the master Sun Jiabao. There she immersed herself in classical figurative sculpture. The goal was to be one in spirit with the model.

After her training she received many commissions and worked on projects and sculptures in public, including the 2008 Olympic Games in Beijing.

In Belgium she remains true to her principles. She is continues with her work and concentrates on the techniques of the sculptors of Europe from the Renaissance, Baroque and other periods. Her sculptures dazzle the viewer with their beauty, craftsmanship and above all femininity.

Luo Li Rong, born in 1980 in Hunan (China), is an artist-sculptress who graduated in 2005 with high honours from the prestigious Central Academy of Fine Arts (CAFA) in Beijing.

Her graduation project received numerous awards. During this period, she participated in multiple public sculpting projects, most notably for the 2008 Olympic Games in Beijing, which had been installed in Da Lian Park from 2003.

Now living in Europe, she has seen a rising recognition and appreciation of her art from international galleries and collectors. In the presence of her works the spectator is immediately touched by the extreme delicacy of the modelling and the great sensuality that emanates from it. This mastery, as remarkable as it may be, disappears, however, in favor of the expression of its subject. The artist invites us not to remain at the stage of fascination with forms and appearances, but rather to go further still towards the spirit of the model. Thus, the veils, the passage of the wind in the hair echo, above all, the inner world of the subject.

The draperies and the look, movements incredibly alive, as if they had just been seized in the moment, are for Luo Li Rong a door ajar on the dimension of eternity present in the Human. “Working with Daum is a unique adventure. The sensuality of the crystal, the soft reflections, the transparency… many artistic and technical challenges made possible by a century-old know-how. What a beautiful surprise to contemplate the spirit of the model through the vibration of the colours and the flickering of light. Daum has a long and beautiful history to which I am very happy and honored to be associated with.” Luo Li Rong

Chinese sculptor Luo Li Rong studied at the ‘Central Academy of Fine Art’ in Beijing. During her education, Luo Li Rong was able to create a furore in the art world. So she worked for a collective exhibition for the Olympic Games in Beijing and won they have several prizes including a bronze medal at a student festival for animated films.

Finally she graduated with an honorable mention from the jury. Her work demonstrates angelic patience and attention to detail. Each handmade, Ceramic detail is applied with precision and this makes each sculpture unique in its kind. The Sculptures are almost human by their shape, were they not for the vast majority part covered with fine ceramic feathers, scales or letters. In combination with some blue or purple colored details provide these mysterious and imaginative sculptures who can keep the viewer’s attention.