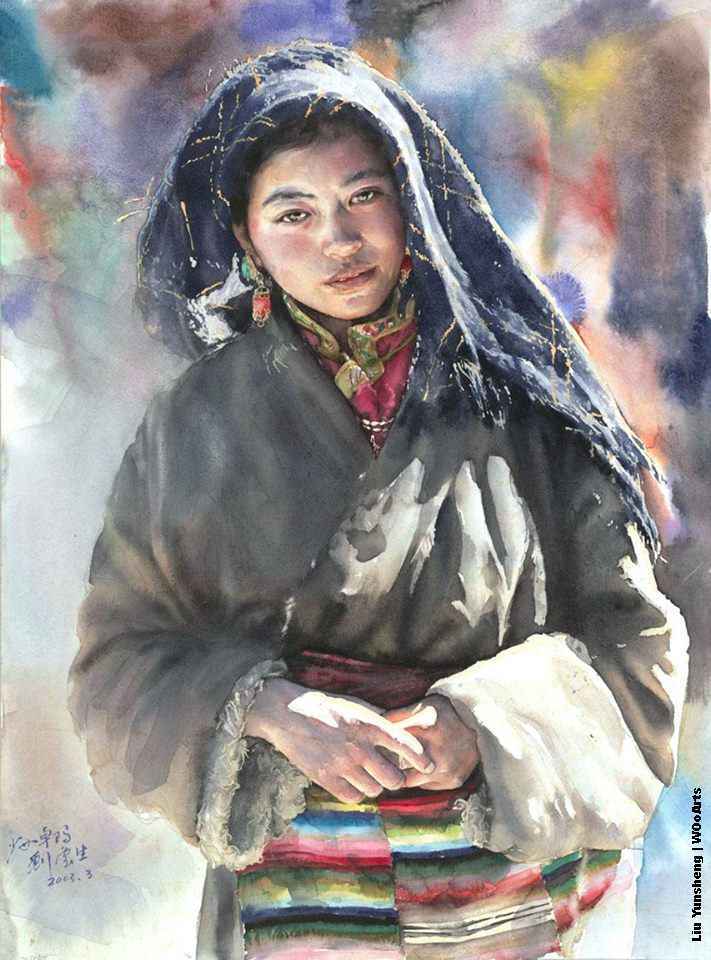 In the past ten years he was more than 20 times deep into the Tibetan area Experience of life.”once by Yushu to Tibet for up to two months , The journey of nearly ten thousand kilometers, which encountered cold and cold, the road ice and snow frozen, and even a few days away from death, have gone through all kinds of difficulties and obstacles, can not do … … “I can not imagine this road hard, but hard to imagine”.

Chinese artist Liu Yungsheng is one of the leading watercolor painters of his generation. Making use of inherited traditional techniques, Yungsheng creates hyperrealistic portraits that convey a trademark observational style. Each depiction seems more photograph than painting, as Yungsheng’s portraits seem to come alive by capturing his subjects, down to the smallest detail.

Born in the 1950’s, Yungsheng spent a majority of his life in and around Tibet, and his works tend to focus on the people, landscapes and lifestyle characteristic of this region and era. He has won several gold awards for his watercolour paintings, gaining special recognition for his intensely detailed portraits. His stunningly realistic paintings serve to showcase the beauty that lays in the finer details and celebrate humanity, wrinkles and all.

Born in Shanghai and graduated from the Doctoral School of Watercolor of Fine Arts, Liu Yunsheng became one of the most exceptional artists of his generation. He offers watercolors of such unreal accuracy that we could easily believe in a photograph. Having won several times the Watercolor Gold Award , his paintings echo the Tibetan areas, where he lived for a long time. In his work landscapes and faces of everyday life, young and older, he re-transmits every emotion, every wrinkle. A kind of memory reminds him of the country and the previous generations.

He earned a degree in painting in 1963, but put his love of art aside to serve in the Chinese military for 35 years. During that time he was prohibited to pursue his art. He took up painting again after retiring at the age of 61.

He was deeply moved by his encounters with the Tibetan people, and has traveled to remote areas of Asia 24 times on reference-gathering expeditions during the winter months. It’s too cold to paint at that time of the year, so he takes photographs. He lives with the families to get to know them better.

He doesn’t want to pursue novelty for its own sake, nor is he trying to preach or to make a political statement. Rather, he’s interested in universal ideas, such as the struggle for existence, the quality of the air on the Tibetan plateau, and the expression of complex emotions.

He uses some modern tools such as Photoshop (in the planning stages), but otherwise his watercolor method is fairly traditional.

Liu Yunsheng uses Winsor & Newton watercolors and a medium-size wolf hair brush for painting faces, hair, and clothes. He saves out his white areas with masking fluid. What fascinates me about Mr. Liu is how his surface technique is so conscientious, but yet he is always striving to capture deep feelings and human nature.

One of the great things about International Artist Magazine is that, for the most part, the artists write their own articles, rather than having their ideas filtered by someone else. In addition to the article on Liu Yunsheng, (#123 Oct/Nov) also includes articles on Daniel Keys, Richard Schmid, Morgan Samuel Price, Daniel Greene, John Michael Carter, Colley Whisson, Jesse Lane, Haley Hasler, and the winners of the International Artist Magazine Challenge with the theme of “Wildlife.”

The #123 Oct/Nov issue of International Artist will also have a feature that I wrote on painting animals from life. Why paint live animals? Of all the plein-air subjects, animals sharpen my senses the most. When they inevitably move out of position, I can no longer rely solely on observation and must shift over to knowledge and memory.