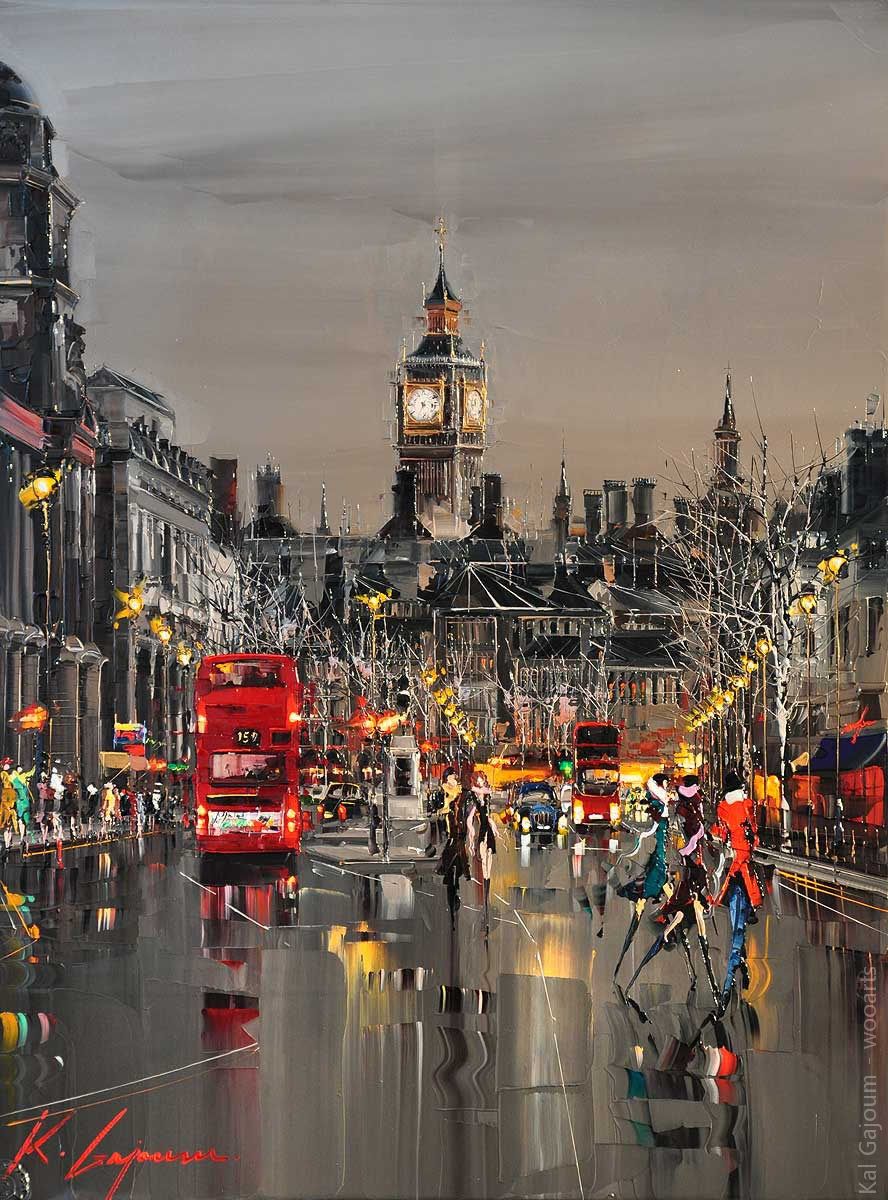 Kal Gajoum was born in Tripoli 1968. His interest in art was sparked at a very early age. In fact, he was only ten years old when he entered his first art competition. Later on he was introduced to oil painting and palette knife techniques by friend of the family who were artist in attendance at the Leonardo da Vinci school of art in Rome.

He held his first exhibition in 1983 in Tripoli.

He moved to Paris to learn watercolour techniques and the Parisian style of painting from a private artist. Then returned to Tripoli in 1992 to give an exhibition.

In Malta he spent his time as a professional artist where he spent seven years working for the Royal Fine Art Gallery and also during this time continuing his pursuit of artistic knowledge. He traveled to Tunisia during this time to give exhibitions.

In 2000 Kal found himself in Britain where he ran the Center Of Britain Art Gallery.

He started a permanent exhibition in the City Of Carlisle where he steadily developed his palette knife techniques and put together a set of four limited edition watercolour prints of the city. Which he sold with the proceeds going to a local charity.

2003 Kal immigrated to Canada where he now resides in British Columbia, Quebec and France. He now concentrates on cityscapes and still life’s using his palette knife techniques in oil on canvas.

Kal Gajoum is one of Canada’s most successful and beloved artists. His instantly recognizable oil paint and palette-knife technique sublimely balances intricate architectural details with gorgeous impressionist movement. Demand for his glowing street scenes and still life paintings is extraordinary and Kal Gajoum is more popular than ever.

After decades spent perfecting his technique, Kal Gajoum walked into Plaza Galleries in 2005 and his journey with us has been truly remarkable ever since. Collectors were immediately captivated by his artwork and Kal Gajoum’s street scenes of Paris, London, New York, Vancouver, Whistler and many other iconic locales sold out time and time again. His original oil paintings and limited edition giclee’s can now be found in private collections in 56 countries around the world.

Kal Gajoum was born in Tripoli in 1968, immigrated to Canada in 2003 and currently calls Vancouver, British Columbia and Montreal, Quebec home. His interest in art was sparked at a very early age, he was only 10-years-old when he entered his first art competition. He was introduced to oil painting and palette-knife techniques by a friend of the family studying at the Leonardo da Vinci School of Art in Rome, Italy.

Kal Gajoum held his first exhibition in 1983 in Tripoli. In 1986 Kal moved to Paris to learn watercolour techniques and the Parisian style of painting from a private artist. Returning to Tripoli in 1992, he had an exhibition displaying his new talents. In 1993 Kal Gajoum moved to Malta as a professional artist were he spent seven years working for the Royal Fine Art Gallery and continuing his pursuit of artistic knowledge. During his stay in Malta, Kal Gajoum exhibited his work many times between 1995-1999, including traveling to Tunisia to exhibit in the Finesse Gallery of Carthage.

In 2000 Kal found himself in Britain where he ran the Centre of Britain Art Gallery. Opening a permanent exhibition in the City of Carlisle in 2001, he continued to develop his unique palette-knife techniques. Further exhibitions in London and Hawaii helped increase the global scope of Kal Gajoums career.

Each August we present an exclusive summer exhibition for Kal Gajoum’s newest masterpieces and we look forward to another beautiful evening in Whistler this August, date to be announced.