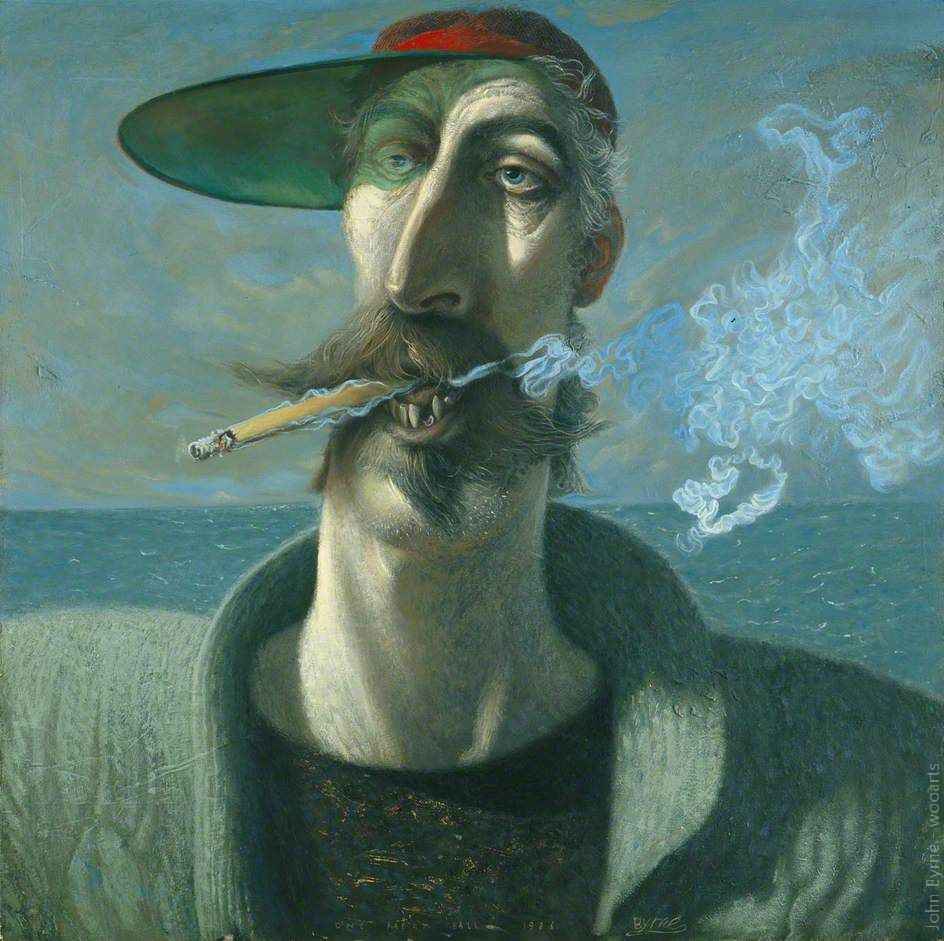 John Patrick Byrne (born 6 January 1940) is a Scottish playwright and artist. He wrote The Slab Boys Trilogy, plays which explore working-class life in Scotland, and the TV dramas Tutti Frutti and Your Cheatin’ Heart. Byrne is also a painter, printmaker and theatre designer.

John Byrne was born into a family of Irish Catholic descent in Paisley, Renfrewshire, where he grew up in the Ferguslie Park housing scheme and was educated at the town’s St Mirin’s Academy before attending Glasgow School of Art (1958–63).

Byrne married firstly to Alice Simpson on 1 April 1964, with whom he has two children in the late 1980s before separating. They officially divorced in 2014. He and the actress Tilda Swinton were in a relationship from around 1989 to 2003. They have two children, twins Honor and Xavier, born in 1997. Byrne married theatrical lighting specialist Jeanine Davies in 2014. They live in Edinburgh.

John Byrne is perhaps best known as the writer of The Slab Boys Trilogy. He has also been regarded as one of Scotland’s foremost television writers. He had also designed for the Traverse, 7:84, Hampstead Theatre, Bush Theatre, Scottish Opera and the Citizens Theatre. For the original 7:84 production of The Cheviot, the Stag, and the Black Black Oil he designed a seven-foot-high pop-up book of stage designs, which is now on display at the V&A Dundee’s Scottish Design Galleries.

As an artist, Byrne’s first London one-man show was held at the Portal Galley in 1967, while he was working as a carpet designer with A.F Stoddart in Elderslie. His work is held in collections in Scotland and abroad.

From 1964 until 1966, Byrne designed jackets for Penguin Books. Having had his work rejected by various galleries, Byrne had success following an exhibition of works at London’s Portal Gallery in 1967. Painted under the pseudonym of “Patrick”, Byrne claimed the dream-like paintings were created by his father, an alleged self-taught painter of faux-naïf images. Byrne’s career as a professional painter started in 1968, when he left Stoddard’s.

As well as designing the scenery for his own plays Byrne, in collaboration with director Robin Lefrevre, also designed the settings for Snoo Wilson’s The Number of the Beast (Bush 1982) and Clifford Odets’ The Country Girl (Apollo Theatre 1983).

Byrne has also designed record covers for Donovan, The Beatles, Gerry Rafferty, Billy Connolly, and The Humblebums. Singer-songwriter Rafferty’s song Patrick is written about Byrne (the lyrics begin: “Patrick my primitive painter of art/You will always and ever be near to my heart”), and the pair co-wrote several songs together.

He illustrated Selected Stories by James Kelman, winner of the 1994 Booker Prize. Several of his paintings hang in The Scottish National Portrait Gallery in Edinburgh, including portraits of Robbie Coltrane, Billy Connolly, Tilda Swinton (the mother of two of his children), and a self-portrait.

Byrne continues to paint from his studio in Edinburgh. He regularly exhibits new work at the Fine Art Society (London and Edinburgh), the Rendezvous Gallery (Aberdeen) and Brown’s Art Gallery (Tain, Highlands).

—-
There are two other factors that make Byrne an outsider: his origins are working class, and they are Scottish working class. Even within Scotland, his status is that of a graduate of a Glasgow, rather than an Edinburgh, art training. And in the west of Scotland, his roots are in the Catholic Irish minority, not the Protestant Scottish majority. It is remarkable how far his talents have brought in him in from the margins – but he deserves to be at the centre.

He was born in unpicturesque Paisley, and brought up on its most notorious housing estate, Ferguslie Park – “Feegie” or “the Jungle”. He did well at his Catholic grammar school, but left without taking his final exams. One reason was the drama of his family background. His mother had schizophrenia, was subject to violent episodes and spent periods in local mental hospitals. In spite of his precocious talent for drawing, Byrne settled for a lowly job at one of Paisley’s carpet factories as a “slab boy”, an apprentice who ground and mixed paint for the firm’s textile designers. He did not stay long, but, as with the agonies of his home life, Byrne’s experience of the teddy-boy world of the 1950s was to prove a rich resource for his writing and a theme in his art.

In 1958 Byrne applied to Glasgow School of Art, which ran a four-year course with a strong emphasis on traditional academic values. It was not plain sailing, but by the time he graduated in 1963 he was a prizewinner. His teachers noted his ability to ventriloquise the styles of modern masters, from Bonnard to Picasso. But on return from a travel scholarship to Perugia, he was faced with the problem of any young artist living in what were then called the provinces: how to make a living. Married, with a son, Byrne took a job in the graphics department of Scottish Television, before returning to the carpet factory, this time as a designer.

And there he might have stayed, had he not noticed the new fashion for “naive” painting being promoted by the Portal Gallery in London. Ever the ventriloquist, he tried his hand at the style, and went a stage further. He wrote to the Portal Gallery pretending that the work he was submitting was by his father, a retired labourer, busker and newspaper seller who signed himself “Patrick”. Portal immediately offered Patrick a show.

It wasn’t until a few weeks before the exhibition that Byrne confessed his subterfuge. The gallery didn’t seem to mind, so it was as the naif painter “Patrick” that Byrne had his first success. He was outed as a graduate of Glasgow School of Art in 1968, but by that time he was a denizen of swinging London, his work bought by the Beatles, and designing record sleeves for Donovan and his Paisley contemporary Gerry Rafferty.

But “Patrick” was only a persona, and there is a restlessness in Byrne that makes him kick over the traces. In 1975 he was the first living artist to exhibit at the newly opened Third Eye Gallery in Glasgow, and he showed non-Patrick works, many the product of a trip to Los Angeles to work on an abortive film project with Donovan. The show was not a commercial success, and Byrne withdrew from publicly showing his paintings for the next 16 years.

One of the reasons was that he had discovered the theatre. He began as a designer, working on Billy Connolly’s The Great Northern Welly Boot Show in 1972, and subsequently becoming virtually the house designer for John McGrath’s radical touring company 7:84 Scotland (7% of the UK population owned 84% of the wealth).

Byrne hugely enjoyed the comradeship of the theatre after the isolation of the studio and, as someone who had always written as well as drawn in his sketchbooks, it was inevitable that he should turn to writing. In 1977 his satire on the creative life, Writer’s Cramp, was the hit of the Edinburgh fringe, and transferred to London. In 1978 he followed it up with The Slab Boys, based on his own experience, and the first of a trilogy of plays (with a fourth, Nova Scotia, in 2008, as a coda) that for the first time gave an authentic voice to postwar Scottish experience. Byrne was not ventriloquising any more.

The question of a Scottish voice was important, for following the failed devolution referendum of 1979, in the 1980s Scotland fell under the hammer of Thatcherism, and its writers and artists were looking for ways to establish a contemporary Scottish cultural identity. Byrne achieved this satirically in 1987 with his six-part television series about a has-been Scottish rock’n’roll band, Tutti Frutti. In 1990, the year that Glasgow was Europe’s capital of culture, he followed it up with the much darker series, Your Cheatin’ Heart, this time with country and western as the leitmotif in a Scottish film noir.

Tilda Swinton was Byrne’s chosen star in Your Cheatin’ Heart, and by the end of filming they were in a relationship. The couple moved to London before later settling in Nairn, on the east coast of Scotland. In 1997 she gave birth to twins, a boy and a girl. As Swinton’s film career blossomed, the couple often travelled, but when the children came to school age it was necessary for Byrne to spend more time in Nairn. In 2004, while filming The Lion, the Witch and the Wardrobe, Swinton began a new relationship, with the artist Sandro Kopp, who came back to Scotland with her, although this did not become public until 2006.

Byrne and Swinton continued to share the care of their children. Contrary to the lurid tales that were spread when the news broke, this was never a ménage à trois, but rather a civilised arrangement by which friendships could be preserved, with Byrne moving out when Kopp moved in. In 2006 Byrne began a new relationship, with the theatre lighting designer Jeanine Davies, with whom he now lives in Edinburgh, while maintaining a studio near Nairn.

Although he had never stopped painting, one of the effects of meeting Swinton was to bring Byrne back to exhibiting. Since 1991 he has shown regularly, becoming a member of the Royal Scottish Academy in 2007. But possibly because he had withdrawn from showing during the period when the reputations of a younger generation of Scottish figurative painters – Ken Currie, Peter Howson, Steven Campbell, Adrian Wisniewski – were at their height in the 80s, he is still seen as an isolated figure. Yet there is a clear line from the Glasgow painters Robert Colquhoun and Robert MacBryde (about whose efforts to break into the London market in the 1940s he wrote a revealing play in 1992) through Byrne to the new Glasgow school and beyond.

Byrne writes about Scottish identity, and makes pictures about his own identity. His most consistent motif is the self-portrait – he once told me that for him, even a still life is a self-portrait. But this self is a shape-shifter, a ventriloquist, as in the persona of “Patrick”, a character in which he continues to paint. Sometimes these can be painful self-interrogations, as in Self-Portrait With Sea Shells, one of his most powerful works, painted in 1991 when his relationship with Swinton was beginning. Others, such as Caledonian Smoking Picture, from the same year, are jokier. Both show him to be a militant smoker.

As the difference between these two works shows, it may be that Byrne eludes the critics because he does not have, as he says, “a brand”. With influences as broad as Giotto and Magritte, the facility of his hand and the speed of his eye allow him to explore a whole range of styles.

He does what serious artists do, moving from one personal “period” marked by particular themes and visual approaches to another, but to achieve a reputation, an artist needs to be identified with a distinctive style that is easily recognisable. A work by Byrne is always recognisable, but one work, as it were, does not necessarily recognise another. Byrne is always exploring, his identity comes in multiple versions, and it is this that makes him not only interesting, but significant.

The other reason that Byrne remains an outsider is that he has a double talent, as a writer as well as a painter (and a comic writer at that). Critics and academics like to specialise in one discipline, and can never be sure that they have mastered their subject if, as here, the subject operates in two. It is another case of the double identity that runs through his work.

Scotland, too, has its double identity, the Jekyll and Hyde of Highland and Lowland, urban and rural, Gaelic and Scots. Since it regained a Scottish Parliament in 1999, however, that identity has become more and more secure, and its contemporary culture more and more confident. John Byrne is an artist and writer who has helped to make it so.