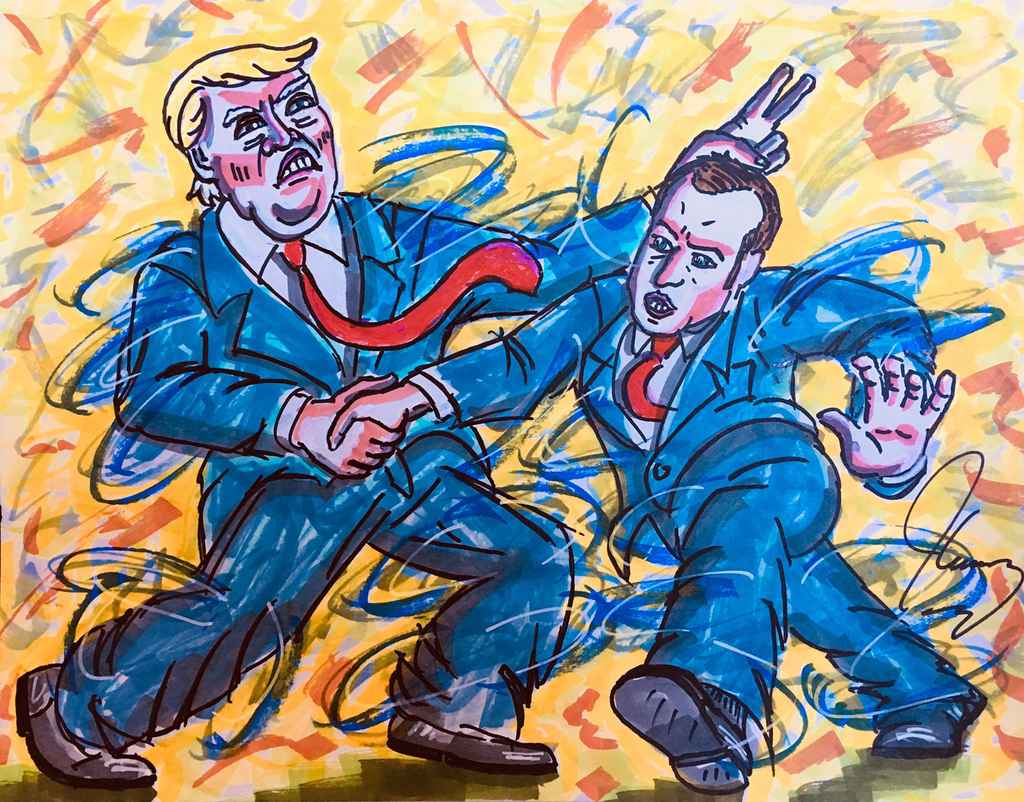 We all know that Jim Carrey is such a great actor, comedian in movies and on stage, but his ubiquitous presence is also in fine art paintings. He displays through his paintings that he is not just an actor but also deep thinker and translate his political view through brush.

In the recent Netflix documentary “Jim & Andy: The Great Beyond”, you discover that Jim Carrey is way more than just a elastic, rubbery faced funnyman.

Some of his paintings displays a grotesque figure of Trump tweaking his nipple while enjoying his ice cream, that was pitched to the Smithsonian National Portrait Gallery as the “official” portrait of No. 45.

Dear Smithsonian National Portrait Gallery @NPG, I know it’s early but I’d like to submit this as the official portrait of our 45th President, Donald J. Trump. It’s called, ‘You Scream. I Scream. Will We Ever Stop Screaming?’ pic.twitter.com/LrCmlXXpv7

His latest paintings trolls the Sinclair Broadcasting Group over the scandal about their mandatory pro-Trump scripts for news anchors, in the concealing a wrestling match between Alex Jones and Sean Hannity.

If u believe wrestling is real u may even believe Fox news, Info Wars and the robotic drones on Sinclair Broadcasting. But wrestling doesn’t harm viewers. Performers like Sean Hannity and Alex Jones should join the WWE where their hyperbole will do less damage to the culture. pic.twitter.com/HHsfvRaToJ

“If u believe wrestling is real u may even believe Fox news, Info Wars and the robotic drones on Sinclair Broadcasting,” Carrey wrote on Tuesday (Apr. 3). “But wrestling doesn’t harm viewers. Performers like Sean Hannity and Alex Jones should join the WWE where their hyperbole will do less damage to the culture.”

Later there would be wedgies and wet willies in the Rose Garden. Macron, it seemed, was willing to suffer anything to keep the planet safe. pic.twitter.com/Tp7RAcUWdy

“Take it. It’s in the contract.” pic.twitter.com/6SecQz84ej

I never thought I’d see a tragedy like this in beautiful Toronto. There’s no way to cover your eyes anymore. My heart goes out to the victims and their families. pic.twitter.com/WtTD2TDQmS

The road to Trump’s White House was paved with good intentions. ;^\ pic.twitter.com/YzOnLjJsxk

Will we end with a bang — or a cacophony of cow farts? Happy McEarth Day!! ;^) pic.twitter.com/fT6mp4IKpa

They’re saying the NRA took Russian money to support the Republican party in the last election. Maybe that’s why Trump and his flying monkeys are so accommodating? Is Wayne LaPierre also Putin’s stooge — or just another run of the mill demon from hell? #BanTheNRA pic.twitter.com/7r0J9NP2ng

If you liked my last cartoon you may also enjoy…

“THE WICKED WITCH OF THE WEST WING AND PUTIN’S FLYING MONKEYS“ pic.twitter.com/slBG7j1s8d

Cheers to you Stephen Hawking, the greatest mental athlete of our time. You are all that is! See you around, buddy! ;^) pic.twitter.com/LEqYnFn2rW