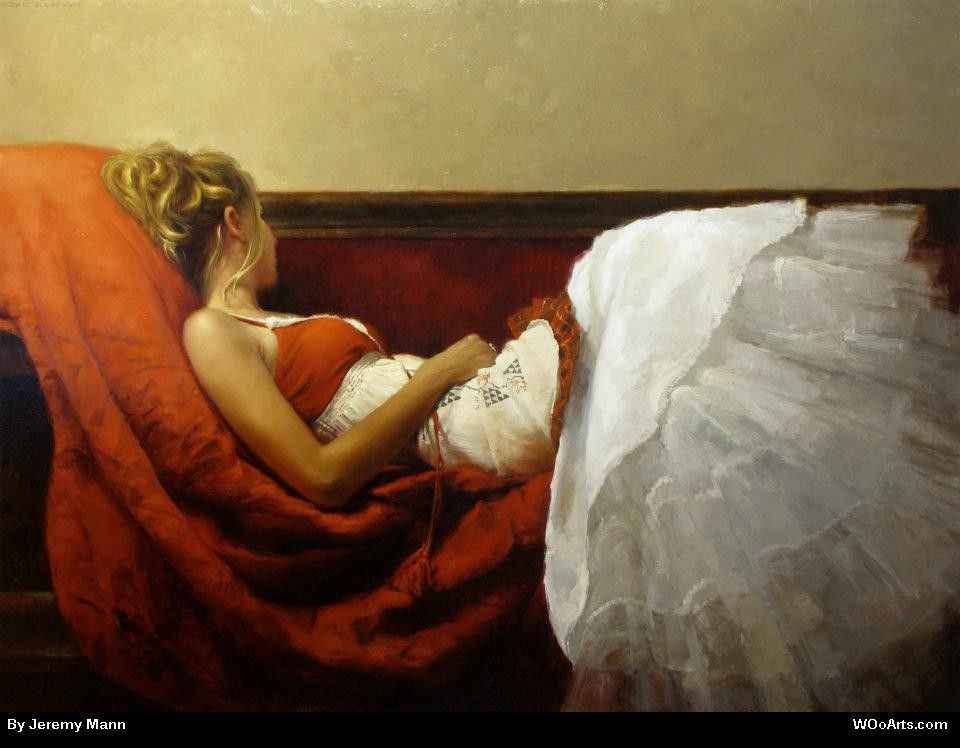 In his creative practice, Mann aims to imbue his city, San Francisco, with drama, mood, and personality. He paints his immediate surroundings with intimate, dynamic expression. A number of his compositions are inspired by wet pavement that reflects street lamps and neon signs and glitters in the rain.

Painting on medium-to-large scale wood panels, Mann utilizes a number of techniques: staining the surface, wiping away paint with solvents, and applying broad, gritty marks with an ink brayer. He paints with confidence and flair, addressing complex compositions with colors both vivid and atmospheric.

Since his graduation, Mann has received attention from critics and collectors alike. His work recently graced the cover of American Art Collector magazine and has been extensively exhibited in Ohio and California. via: artistaday.com/?p=14438

Jeremy Mann, Women, and the City

Dramatically and skillfully rendered, the cityscapes and figurative works of Jeremy Mann give visual form to the emotive essence of modern life.

City streets after dark, the glare of lamplight reflecting off streets slick with rain. The harsh, fluorescent lighting of a city apartment, a late night turning into an early morning. Jeremy Mann’s paintings capture the tenor of these moments that characterize life in the city. Whether depicting the distinctive hills and winding roads of the artist’s own San Francisco, or the bustle of the city that never sleeps, Mann paints the heart of his setting.

Confident, gestural strokes and brilliant highlights define his style. Any detail of one his cityscapes would almost certainly look abstract. But as the eye moves away from the canvas, dots of red emerge into rows of brake lights and slashes of blue signal the glow of neon street signs.

Mann works to manipulate paint in a variety of techniques, sometimes staining the surface of the canvas, using solvents to thin and remove paint, or exploiting the gritty quality of an ink brayer. The result is a personalized, expressive style.

Interestingly, Mann’s cityscapes are almost completely devoid of figures. His figurative works form a separate part of his artistic output and are just as masterfully executed. These interior scenes of women picture loneliness and ennui, self-reflection and melancholy, all expressed in a deeply sensuous visual language.

Though his work divides easily into these categories, a common theme underlies both. The modern city – dark, sexy, stimulating, seductive – is Mann’s true subject.

Mann is the subject of a solo exhibition at John Pence Gallery in San Francisco, opening June 14 and running through July 6. To see more from the exhibition, visit johnpence.com, and to learn more about the artist, see his website, redrabbit7.com.

This article was featured in Fine Art Today fineartconnoisseur.com/FAC-Email/10626896