Germán Aracil is a contemporary spanish artist, German Aracil was born in 1965 in Alicante. In 1985 he began his studies at the San Carlos School of Fine Art in Valencia, Spain.

Aracil’s first one-man show was held in his home town of Alicante, followed in 1990 by exhibitions in New York, Miami, USA. Subsequently, German Aracil has exhibited his work with great success in Spain, Portugal, Japan, Germany, France, South America and the USA.

On any given day, I entered an art gallery and my soul was broken in a painting, it was a nude, and for those things that chance has, the author was there; They introduced him to me, it was Germán Aracil, his detained hands ignited the memory and in a cry of silence I thought of the great poet and transcendental philosopher Emerson: “the name
is only half of himself, the other half is his expression”.

I acquired the painting, of course, and from that moment I was trapped in its painting like a castaway in the night, subject to an oar of paint; because there was no doubt, that which is elemental to call himself a professional painter, Germán Aracil had it: lines firmly traced, cleverly contoured shapes , and the relationships between the intensity of light and the value of shadows cast by the total singular form, between harmonious chromatic chords, were resolved with apparent simplicity.

Sometimes, it is the color of the skin with all its lust that exults the senses; other times, the devilishly crafted halftones; other times it is the light that gilds the whole picture in a
comforting luminosity ; other times it is red or blue, with white prints , of delicate suggestive feminine garments , giving his work a plastic lyric with a firm and sure hand. Its bottoms are a sigil of air in its fingers.

Figurative sequences, fundamentally feminine, as well as a contained emotion before the bronze of the flesh as the protagonist of their faces or their torsos, invade the atmosphere with a weightless and suggestive air , the result of which is nothing other than the harmony of colors , synchronized in the achievement of the form in fullness.

But, it is that also, Germán Aracil searches the most hidden corners of the soul, always diving from the inside out, so that in the expression of the faces or the body we contemplate captive figures of empowered looks of intimacy, which increase the feeling of reality, and be able to express (with a very fine thread) tenderness, suffering, sadness or remoteness in the gaze; acceptance of the passage of time, the poison of bare skin, the silence of the eyes or, perhaps, the beauty of lonely roses.

In short, Germán Aracil, immerses himself in the numbness of the human being and reveals the magic of the unknown through his paintings, academic painting, in some cases, but nothing cloying, since the good hand of the trade is seen in the fluency of the perspective drawn and in the cleanliness of its colors, to interpret objective contents from a refined subjectivity.

In July 2011, the French magazine Pratique des Arts, through its collaborator Stéphanie Portal, from London, interviewed me in my studio in Muro de Alcoy. This magazine is widely distributed in France and carries out reports and interviews with painters, sculptors, cartoonists and people related to art.  I had the honor of appearing on the cover of this magazine that was in its 100th edition.  The truth is that it was a great satisfaction for me.

It was a very intense morning with many photographs and many other questions about the paintings, the cakes, the supports … etc. The magazine appeared in September 2011.
From here I have to thank my friend Etienne Drouet for his disinterested collaboration in acting as an interpreter; Also to my daughter Angela for the enormous patience and her know-how. via: https://germanaracil.blogspot.com/ 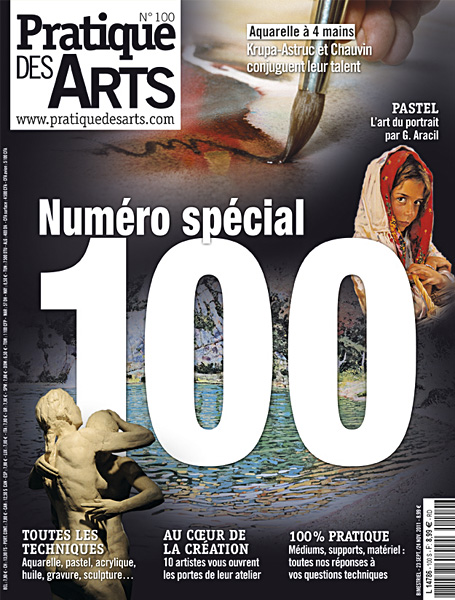