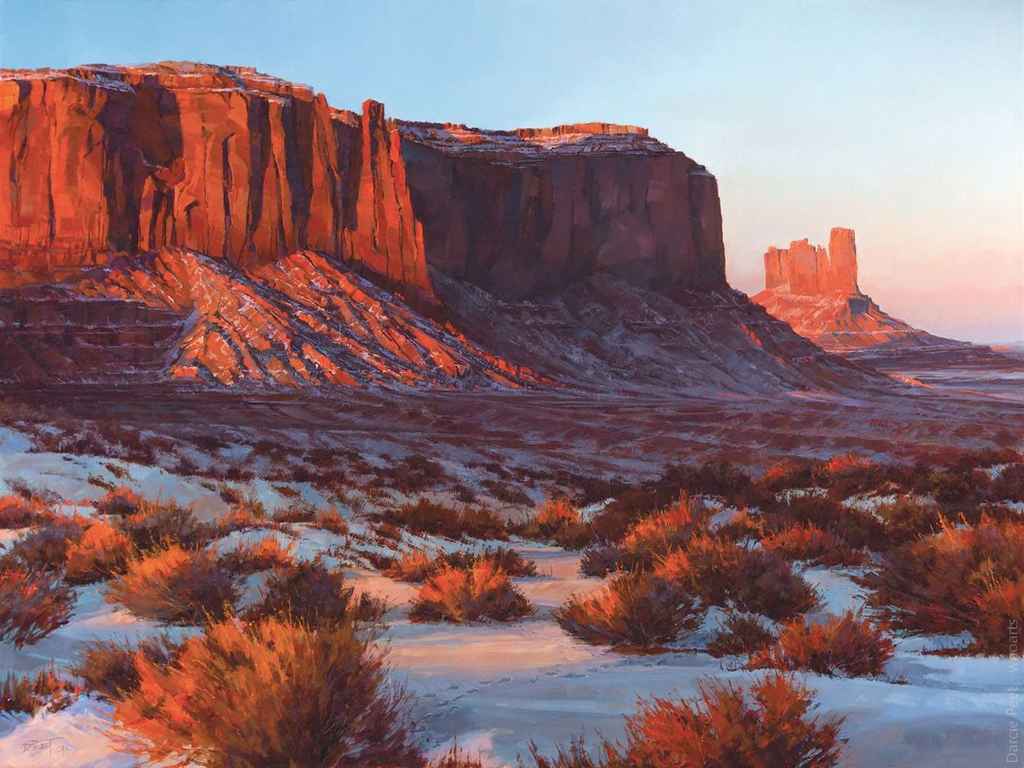 Round the next bend in the trail, over the next hill… seeking the quintessential elements of the “wild places” that I explore and love. Hailing from Oak Park, Illinois; raised in Pittsburgh Pennsylvania, a love of horses and the west took Peet to Colorado as a child, and again in the early ’60’s.

For over twenty-five years Peet has called the Colorado Rockies (Copper Mountain) and Tucson’s Sonora Desert, home, during different times of the year. Many childhood summers were spent exploring the Chicago Art Institute and experiencing feature exhibits by Andrew Wyeth and Monet.

Traveling to Paris offered the opportunity to further immerse Peet in the art of the Impressionists. The teeming color, energy and endless dance of light and atmosphere, remain today as vivid and enduring influences, likewise, the directness and spontaneity of the Plein Air movement in California and the West; the bold light, shadow and architectural form of Caravaggio and Carl Rungius; the fresh, fluid work of Russian-American Impressionist, Nicolai Fechin as well as contemporary painters Richard Schmid, Jim Reynolds, Oleg Stavrowsky and C. W. Mundy.

Whether a 5-day pack trip into Canyon de Chelly; hiking to timberline to capture a painting of late spring snow; braving the desert sun of Saguaro National Monument; or tucked out of the wind behind scraggly, alpine evergreen, high on Trail Ridge Road in Rocky Mountain National Park, the extraordinary diversity of terrain, climate, seasons and light of the Rockies and desert, provide never-ending sources of adventure and inspiration.

And most recently… canoeing, kayaking, biking or hiking the Canadian Rockies, Alaska, Glacier National Park, California wine country and Sonoma Coast, and winter in Monument Valley offers stunning raw material for future paintings. Education and Work Experience Drawing and painting since grade school, Peet has had a multi-faceted business career in fine art and design including teaching, and positions in the fields of graphic design and advertising.

After more than twenty years in advertising and graphic arts, Peet returned to graduate school for an M. A. in Interior Design. Prior to the introduction of C.A.D. (Computer-Aided Design), when development and presentation illustrations were done by hand, here, the intense study of architecture, color, form, composition, scale, spatial relationships and speed drawing left an indelible mark on her painting.

Over twenty creative awards have been achieved, including an Award of Excellence from the U.S. Industrial Film Festival for co-production of a documentary film; and she has served as a Project Design Team Member at the Children’s Museum, Denver, Colorado. Many years of volunteer creative and design work have been devoted to various Chambers of Commerce and health care facilities.

Painting and living an outdoor life since childhood… Peet loves the exploration and discovery of “wild places” in seeking singular painting material. With a B.A. in Art from Colorado College and M.A. in Interior Design, University of Colorado-Denver, Peet has taught art and pursued a multi-faceted career in graphic design, advertising, and commercial interior design, when presentation materials were still hand-done vs CAD. Peet has served as a Project Design Team Member – Children’s Museum, Denver, Colorado, and many years of volunteer design work for various Chambers of Commerce and health care facilities.

Darcie Peet notes that the national parks were always part of her growing-up years. She recalls adventure tales as she browses black & white photo albums of her folks hiking in Arches, Zion, the Grand Canyon, Rocky Mt. National Park, the Tetons, Yellowstone, Yosemite and Death Valley. Glacier National Park was always special, as her Dad, as an Eagle Scout, spun tales of his time there building and repairing trails. Darcie’s sister took him back to hike on his 70th birthday. Her father refers to Darcie as a “chip off the old block,” as she too grew up involved in all sorts of outdoor activities. Today, for her painting, she seek the quintessential elements of those “wild places.”

Hailing from Oak Park, Illinois; raised in Pittsburgh Pennsylvania, a love of horses and the west took Peet to Colorado as a child, and again in the early ‘60’s. For over thirty years Peet has called the Colorado Rockies (Copper Mountain) and Tucson’s Sonora Desert, home, different times of the year.

Throughout primary and secondary school Peet was involved in advanced art classes and weekend, high school drawing classes at Pittsburgh’s, Carnegie Institute of Technology. With a B.A. in Art and M.A. in Interior Design, Peet has taught art and pursued a multi-faceted career in graphic design, advertising, and commercial interior design, prior to the introduction of C.A.D. (Computer-Aided Design), when project design development and presentation boards were done by hand.

Since childhood, her two great passions have always been painting and outdoor adventure, especially throughout the American West, from Alaska to the desert Southwest. So much of the exhilaration in painting is in the initial quest… the journey, the adventure in finding those “off-the-beaten-path” settings and hidden jewels. Having been a plein air painter for many years, she now travels further into the wilderness with a camera to take back with her as much raw material, experiences, mood and memories as possible. Hiking, cycling, canoeing, riding, camping and kayaking, she seeks a vital sense of place and glimpse into the powerful personality of these humbling, bold, back country spaces that Darcie reveres and respects.

M. A. Interior Design: University of Colorado, Denver, School of Architecture
Nominated to Who’s Who in American College Students, Award of Scholastic Excellence
Elected to the Honorary Society for Architecture and Allied Arts, Tau Sigma Delta