178 Graffiti By The Iconic Artist Banksy 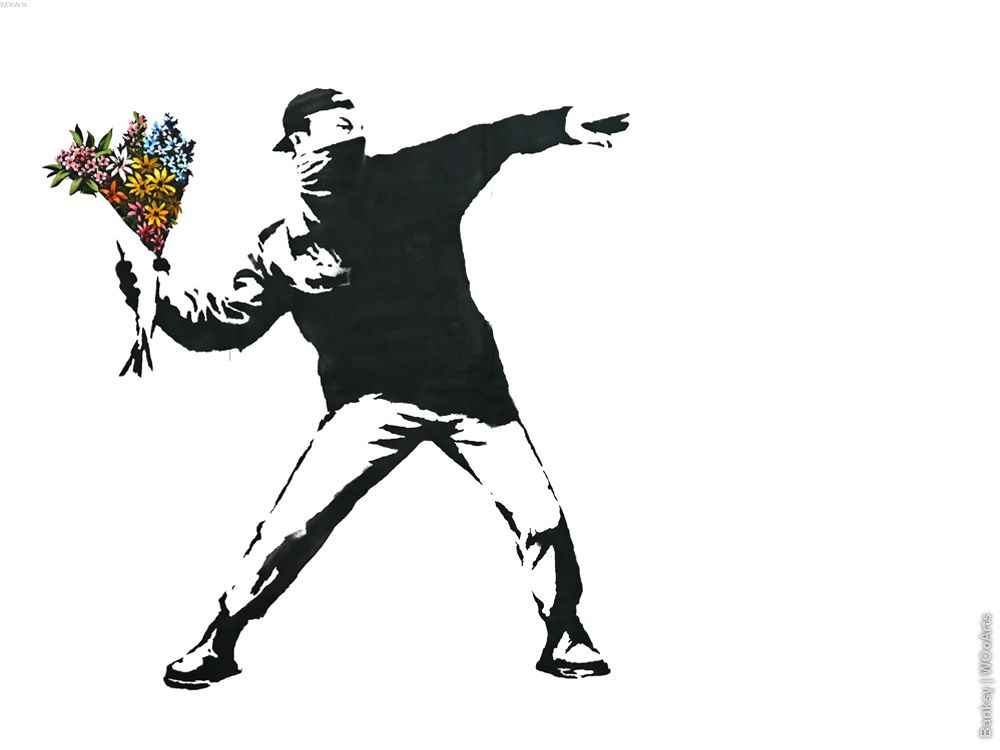 Banksy is an anonymous England-based street artist, vandal, political activist, and film director. His satirical street art and subversive epigrams combine dark humour with graffiti executed in a distinctive stenciling technique. His works of political and social commentary have been featured on streets, walls, and bridges of cities throughout the world. Banksy’s work grew out of the Bristol underground scene, which involved collaborations between artists and musicians. Banksy says that he was inspired by 3D, a graffiti artist who later became a founding member of the English musical group Massive Attack.

Banksy displays his art on publicly visible surfaces such as walls and self-built physical prop pieces. Banksy no longer sells photographs or reproductions of his street graffiti, but his public ‘installations’ are regularly resold, often even by removing the wall they were painted on. A small number of Banksy’s works are officially, non-publicly, sold through Pest Control. Banksy’s documentary film Exit Through the Gift Shop (2010) made its debut at the 2010 Sundance Film Festival. In January 2011, he was nominated for the Academy Award for Best Documentary for the film. In 2014, he was awarded Person of the Year at the 2014 Webby Awards.

Personal life and disputed identity
Banksy’s name and identity remain unconfirmed and the subject of speculation. In a 2003 interview with Simon Hattenstone of The Guardian, Banksy is described as “white, 28, scruffy casual – jeans, T-shirt, a silver tooth, silver chain and silver earring. He looks like a cross between Jimmy Nail and Mike Skinner of the Streets”. He began as an artist at the age of 14, was expelled from school, and served time in prison for petty crime. According to Hattenstone, “anonymity is vital to him because graffiti is illegal”. For 10 years in the late 1990s, Banksy lived in Easton, Bristol, then moved to London around 2000.

Banksy is believed to be Robin Gunningham, born on 28 July 1973 in Yate, 12 miles (19 km) from Bristol. Several of Gunningham’s associates and former schoolmates at the public Bristol Cathedral School have corroborated this rumour, and in 2016, a study found that the incidence of Banksy’s works correlated with the known movements of Gunningham. Lawyers representing Banksy commented on this study, but did not suggest that the paper’s conclusions were flawed.

There has been alternate speculation that Banksy is:

Robert Del Naja (a.k.a. 3D), frontman of the trip hop band Massive Attack. Del Naja had been a graffiti artist during the 1980s prior to forming the band and had previously been identified as a personal friend of Banksy.
Jamie Hewlett, English comic book artist and designer best known for the comic Tank Girl and the virtual band Gorillaz. Joanna Brooks, Banksy’s publicist, denied this claim.
In October 2014, an internet hoax circulated that Banksy had been arrested and his identity revealed.

via: Wikipedia
—
The Story Behind Banksy
On his way to becoming an international icon, the subversive and secretive street artist turned the art world upside-down

By Will Ellsworth-Jones
Smithsonian Magazine, February 2013

When Time magazine selected the British artist Banksy—graffiti master, painter, activist, filmmaker and all-purpose provocateur—for its list of the world’s 100 most influential people in 2010, he found himself in the company of Barack Obama, Steve Jobs and Lady Gaga. He supplied a picture of himself with a paper bag (recyclable, naturally) over his head. Most of his fans don’t really want to know who he is (and have loudly protested Fleet Street attempts to unmask him).

But they do want to follow his upward tra­jectory from the outlaw spraying—or, as the argot has it, “bombing”—walls in Bristol, England, during the 1990s to the artist whose work commands hundreds of thousands of dollars in the auction houses of Britain and America. Today, he has bombed cities from Vienna to San Francisco, Barcelona to Paris and Detroit. And he has moved from graffiti on gritty urban walls to paint on canvas, conceptual sculpture and even film, with the guileful documentary Exit Through the Gift Shop, which was nominated for an Academy Award.

Pest Control, the tongue-in-cheek-titled organization set up by the artist to authenticate the real Banksy artwork, also protects him from prying outsiders. Hiding behind a paper bag, or, more commonly, e-mail, Banksy relentlessly controls his own narrative. His last face-to-face interview took place in 2003.

While he may shelter behind a concealed identity, he advocates a direct connection between an artist and his constituency. “There’s a whole new audience out there, and it’s never been easier to sell [one’s art],” Banksy has maintained. “You don’t have to go to college, drag ’round a portfolio, mail off transparencies to snooty galleries or sleep with someone powerful, all you need now is a few ideas and a broadband connection. This is the first time the essentially bourgeois world of art has belonged to the people. We need to make it count.”

The Barton Hill district of Bristol in the 1980s was a scary part of town. Very white—probably no more than three black families had somehow ended up there—working-class, run-down and unwelcoming to strangers. So when Banksy, who came from a much leafier part of town, decided to go make his first foray there, he was nervous. “My dad was badly beaten up there as a kid,” he told fellow graffiti artist and author Felix Braun. He was trying out names at the time, sometimes signing himself Robin Banx, although this soon evolved into Banksy. The shortened moniker may have demonstrated less of the gangsters’ “robbing banks” cachet, but it was more memorable—and easier to write on a wall.

Around this time, he also settled on his distinctive stencil approach to graffiti. When he was 18, he once wrote, he was painting a train with a gang of mates when the British Transport Police showed up and everyone ran. “The rest of my mates made it to the car,” Banksy recalled, “and disappeared so I spent over an hour hidden under a dumper truck with engine oil leaking all over me. As I lay there listening to the cops on the tracks, I realized I had to cut my painting time in half or give it up altogether.

I was staring straight up at the stenciled plate on the bottom of the fuel tank when I realized I could just copy that style and make each letter three feet high.” But he also told his friend, author Tristan Manco: “As soon as I cut my first stencil I could feel the power there. I also like the political edge. All graffiti is low-level dissent, but stencils have an extra history. They’ve been used to start revolutions and to stop wars.”

By 1999, he was headed to London. He was also beginning to retreat into anonymity. Evading the authorities was one explanation—Banksy “has issues with the cops.” But he also discovered that anonymity created its own invaluable buzz. As his street art appeared in cities across Britain, comparisons to Jean-Michel Basquiat and Keith Haring began circulating.

Banksy’s first London exhibition, so to speak, took place in Rivington Street in 2001, when he and fellow street artists convened in a tunnel near a pub. “We hung up some decorators’ signs nicked off a building site,” he later wrote, “and painted the walls white wearing overalls. We got the artwork up in 25 minutes and held an opening party later that week with beers and some hip-hop pumping out of the back of a Transit van. About 500 people turned up to an opening which had cost almost nothing to set up.”

In July 2003, Banksy mounted “Turf War,” his breakthrough exhibition. Staged in a former warehouse in Hackney, the show dazzled the London art scene with its carnival-atmosphere display, which featured a live heifer, its hide embellished with a portrait of Andy Warhol, as well as Queen Elizabeth II in the guise of a chimpanzee.

Late that year, a tall, bearded figure in a dark overcoat, scarf and floppy hat strolled into Tate Britain clutching a large paper bag. He made his way to Room 7 on the second level. He then dug out his own picture, an unsigned oil painting of a rural scene he had found in a London street market. Across the canvas, which he had titled Crimewatch UK Has Ruined the Countryside for All of Us, he had stenciled blue-and-white police crime-scene tape.