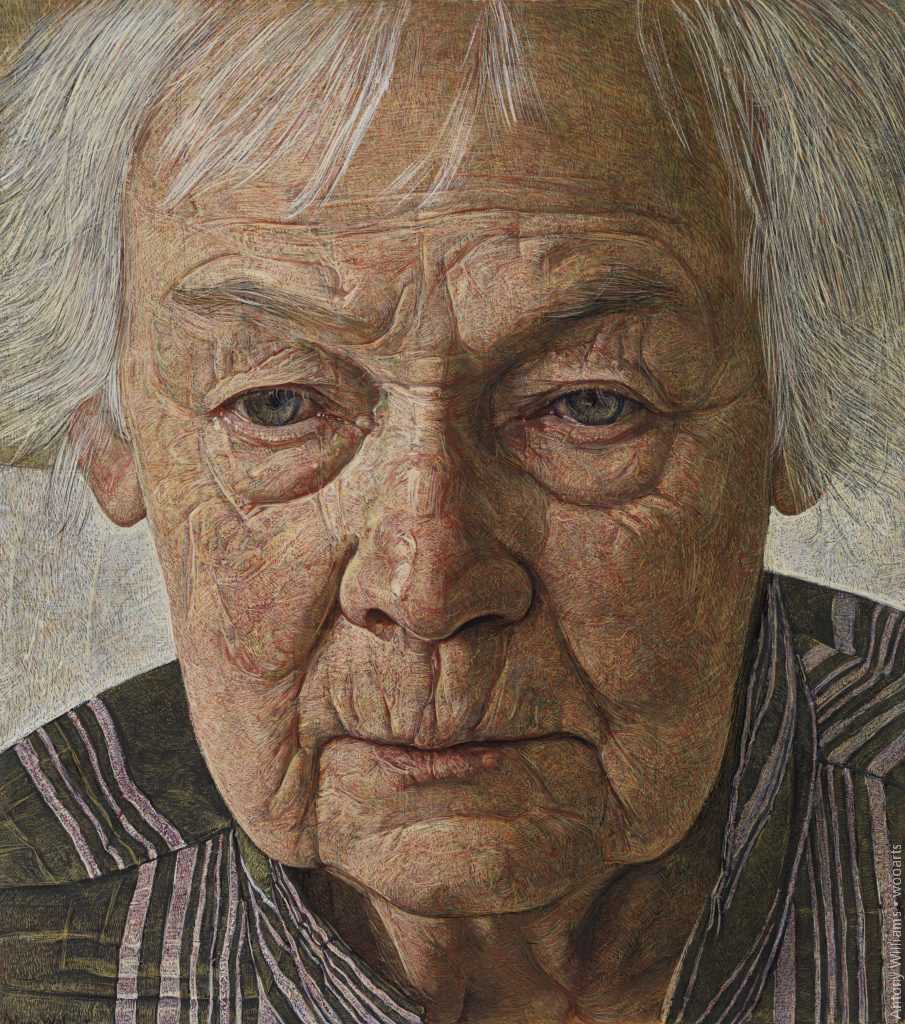 Antony Williams trained at Farnham College of Art and Portsmouth University in the UK. He works almost exclusively in egg tempera which can be a painstaking and exacting medium, but which allows him to express a deep feeling about the look of the world.

All of his work is based on direct and intense observation, can produce as a result a very heightened sense of realism, where every surface detail is given almost equal and constant consideration.

“When Williams paints human faces and bodies in tempera – whether his own, or that of another sitter – he makes the viewer intensely aware of surface detail. One sees, more insistently perhaps than one does in life, the little marks of wear and tear, the furrows and wrinkles…

Williams’ still lifes and portraits – like much art – underline the passing of time and mortality. This was the reason no doubt why his fine portrait of the Queen caused controversy.

Inevitably, his method, his close vision, revealed that that these were in fact the face and hands of an ageing woman. That is not how everybody chooses to think of the monarch. But as a work of art, and an exercise in sober, careful truth – telling like the best of his work – it was indeed, very impressive.”

Antony won the BP Portrait Award Third Prize of £8,000 for his egg tempera painting of Emma Bruce who had been modelling for Williams almost continuously for eleven years in his studio in Chertsey

Antony Williams with his Third Prize and his prize-winning portrait
Emma
Egg tempera on board, (690 x560mm,
You’ll see from my “More about Antony Williams’ section below that Antony is a professional painter who is very experienced and well regarded. He has won a number of prizes and awards and his portraits are in a number of collections, notably the Royal Collection, the House of Commons and the National Portrait Gallery.

Below is my video of my interview with Antony. I asked him about

Antony encourage other portrait painters to also use egg tempera and submit their paintings to the annual exhibitions of the BP Portrait Award!

His technique isn’t obvious from digital images so I’ve done a crop of the portrait to illustrate how Antony works and why people are so interested in his use of egg tempera and how he applies it – using hatching strokes. Right click the image below and open in a new tab to see his technique even more clearly.

In the 1960s and ‘70s Hockney virtually appropriated the swimming pool as his signature subject. His paintings, in scintillating pop colours, with light bouncing off shimmering water in Los Angeles and Provence, helped make him famous. But it is more than the same subject matter that strikes you here.

Because in Williams’ painting there’s also something of that same quality of unease that infiltrates Hockney’s Portrait of an Artist (Pool with Two Figures) – his 1972 painting that only late last year broke the auction record for a work by a living artist.

Though Williams’ much sparer painting is completely devoid of figures, it contains a similar brooding impression of slight discomfort as we wait – expectantly – for a swimmer to break the gentle film of water and rupture the careful sense of order the pool conveys.

And of course Williams’ swimming is really nothing quite like Hockney’s. It is Piero della Francesca who makes the difference. He delivers the precision to Umbrian Swimming Pool – the sense of design, the perspective, the very real aura of a hot Italian landscape, and the technique – egg tempera.

To a British audience, Piero della Franscesca’s best-known painting is surely The Baptism of Christ in the National Gallery. Painted in around 1440, it too uses the age-old method of mixing pigment with water and egg yolk.

Tempera is a very precise, very time consuming way of working, and one that was increasingly superseded later in the fifteenth century by oil paints.

(Indeed, many of Piero della Francesca’s subsequent paintings were made using oils.) It is a technique, though, to which Williams is wholly devoted, as he meticulously covers his panel with endless tiny brushstrokes.

He started using tempera in the early 1990s, and it’s the medium in which he made his remarkable portrait of the Queen in 1996 – a painting that, despite the controversy it caused (particularly in his representation of Her Majesty’s fingers), helped launch his career. Tempera forces the artist to work slowly.

Piero della Francesca, like Williams, worked slowly, and both painters maintain the same constancy of careful technique across the whole of their panel. This helps to create a lot of their heightened sense of reality.

As in Williams’ Umbrian Swimming Pool, a tree dominates della Francesca’s Baptism, each of its many leaves painted in the same careful, scrupulous detail.

And both works focus on the symbolic importance of water. Yet the figures that crowd della Francesca’s scene are absent from Williams’ work. Once again, looking at his painting, we simply wait, expectantly, for something – anything – to break the sense of heat and stillness.

This feeling of something uncertain about to happen – or that might just have happened – is characteristic of much of Williams’ recent work. At least three of his new paintings, Figure Lying by Water, Figure at Gracious Pond and Beyond the Pines, are based on his exploration of the landscape around Chobham Common, near his home in Surrey.

Williams has lived all his life in the county, and from a young age holidayed by the Wey and the Thames with his widowed mother and his four young siblings, playing in the water meadows and among the wooden shacks that once lined the rivers. It is these early memories, and the experience of paternal loss, that perhaps resonate as echoes in these waterside works.

There is also something maybe significant in the artist’s recent change of studio. For many years he worked in a rented room in a large house on the High Street in Chertsey.

But following the death of his landlady, Margaret Robinson, whom he had painted assiduously, annually, for sixteen years, he had to find a new place to paint. By good fortune this led him to Platt’s Eyot, a large island on the Thames near Hampton, on the fringes of south London.

A location for many decades of boatbuilding, its sheds and warehouses now stand empty and derelict – or are reused for an odd array of small businesses. It is a slightly eerie, abandoned place, one that perfectly suits Williams’s isolated way or working.

His subjects and life models visit him there, to have their portraits painted. In View from Platts Eyot, one of his regular female models stares out of the studio window in still concentration, looking towards the far bank of the river, at a scene where, unsettlingly, nothing appears to be happening.

If there is no-one visiting him, Williams works on a still life of his plastic dinosaurs – toys that also perhaps unwittingly hark back to his childhood. But Williams emphasizes that whilst he intends the sense of mystery that imbues many of his paintings, an actual sense of story is not important to them. They are left open to interpretation.

He is conscious that people will bring a different narrative, a different experience or emotion to their own encounter with one of his works. It is just one of the things that makes them so appealing, so successful.

Everything he paints is created using a multitude of tiny gestural marks, displaying the infinite patience of his semi-pointillist technique.

And what goes on beneath the surface paint is just as important as the lines that go on top – there is a lot of trial and error involved in creating each of these paintings.

In the late 1980s through to the early mid 90s he was working like David Bomberg and Frank Auerbach, making large gestural views of London and the Lakes in thick charcoal and oil paint.

Something of those powerful gestures still lingers in his work, though now each is writ incredibly small in an infinity of tiny strokes. It is this same process of almost endless mark making that lends the instantly eye catching power to his portraits.

We seem to see the actual flesh beneath the skin, and the veins within the flesh, and even the water in a sitter’s rheumy eyes. And here again we encounter the collision of old with new, as Lucian Freud seems to meet the early Flemish portraiture of Jan van Eyck – both painters that Williams greatly admires. He clearly loves the careful process of painting – thrives on it, even.

Tempera, as he explains, ‘is more akin to pencil drawing. Lean and economical, it is not so expressive as oils, it limits you in some ways, and I like that limiting factor, of working within its possibilities. It’s like a straitjacket that has focused me.’ This attention to the endless brushstrokes, always careful adjusting, modifying, looking, gives him the sense that he is doing something that no-one else is quite doing.

It is a technique that has brought him considerable success and recognition. His portraits are in the collections of the National Portrait Gallery, the House of Commons, Lord’s Cricket Ground and the Royal Society of Portrait Painters. Through patient hard work and a distinctive vision, it is a success that has been well and justly won.