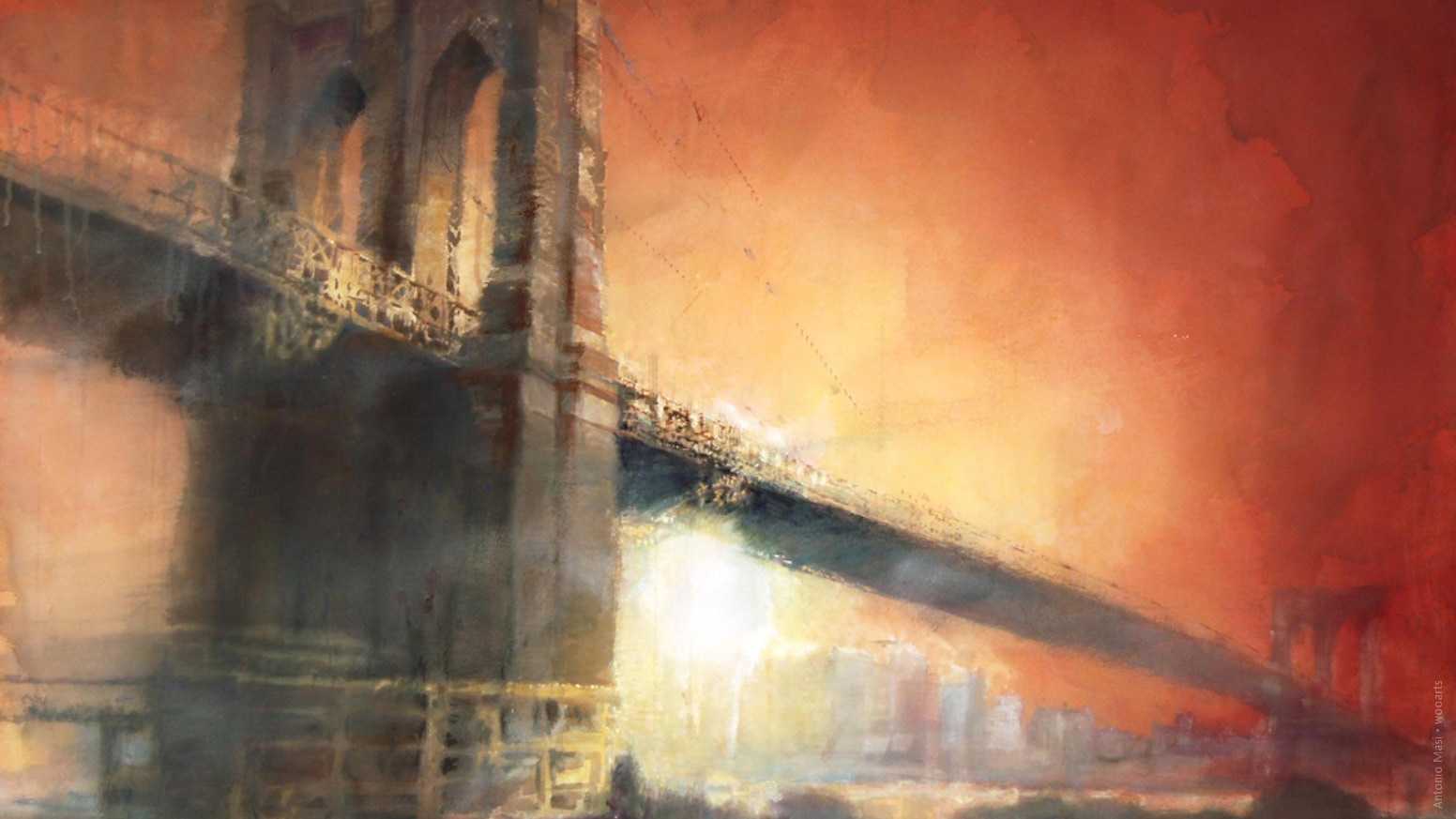 In 1947, when I was seven years old, my parents, five brothers, two sisters, and I came to New York City from Italy. We travelled seven days on a freighter and landed on Ellis Island.

That moment of entry on December 7, 1947, is still vivid. As we passed through immigration, I remember straining to see New York harbor through the windows of the processing center. In the distance, thousands of glowing lights dotted the skyline. The metropolis beckoned, and I intuitively grasped the promise, excitement, and staggering immensity of the place.

Today, I have no doubt that my deep feelings for the city derive from those first indelibly imprinted and magical moments. As an artist, I found that I wanted, somehow, to replicate on canvas those first sensations. Conversely, I also wanted to convey how the metropolis’s incomprehensible vastness and richness can sometimes make one feel (especially an untested seven year old) small and insignificant.

About a decade ago, I began a series of paintings that mainly focus on the bridges of New York City. The first bridge I painted was the 59th Street (Queensborough) bridge. I have a particular attachment to the 59th Street Bridge because in the early 1900s my grandfather Francisco Masi was one of the multitudes of Italian laborers who hauled steel girders to build it. Many years later, I learned that the bridge opened in 1909 and that more than 50 people had given their lives to building it.

In 2000, at age 60 and after raising three children, I was finally able to dedicate myself to painting the major bridges of New York City. I work mostly in watercolor and feel, contrary to old-fashioned expectations, that it is a powerful medium capable of expressing bold subjects. I tend to use watercolor thickly–the way most people use oils. To develop mood, I apply multiple glazes and juicy washes. Then, I refine areas with descriptive details.

I am a student of the bridges I paint. When possible, I walk every bridge that I paint. I study the history and architecture of each bridge. I see a bridge in terms of place. How does a bridge fit into its immediate surroundings and into the city? Each bridge’s structural development also interests me. No matter its size, each bridge is a mix of pins, bolts, curves, angles, masonry, and wire. Each bridge must bear the burden of often extraordinary weight and changing weather. In studying each bridge, I work to understand basic design principles. I then incorporate this knowledge into each painting. Finally, I study each bridge at various times of the day and night, in different seasons, and in all kinds of weather. All these elements help determine light and mood.

My primary concern, always, is to capture mood and those stirring, overpowering sensations reminiscent of my first glimpse of New York harbor. My paintings are often (but not always) large. Sometimes iconic subjects demand largeness. In the end, my subjects — grand and powerful as they are — are secondary to conveying what I feel in the moment. To date, I have completed almost 100 paintings.

In 1947, when Antonio Masi was seven years old, he emigrated with his parents and siblings from Italy to New York City. Fifty years earlier, Masi’s grandfather, Francesco, had hauled steel as a part of the workforce that built the Queensboro Bridge. Francesco’s bridge-building tales were retold in the Masi family, and Antonio, who always loved to draw, was intrigued.

Upon his arrival in New York, Masi was deeply drawn by the beauty of the city’s iconic bridges, but most especially the Queensboro. And it wasn’t long before he knew that one day he would be an artist who would paint bridges.

His family settled on New York’s Upper East Side. Masi attended the High School of Industrial Art, majored in illustration, and was graduated in 1958. Antonio then received a full art scholarship to the School of Visual Arts and was graduated with honors in 1961.

Masi began his professional career as a commercial artist for numerous city publications and art agencies. In 1962, he married artist Elizabeth Jorg and soon began a family.

In 1966, Antonio returned to his high school alma mater to teach art. In 1973, he was named Art Chairperson. (SIA has since been renamed the High School of Art and Design.) He also enrolled in CUNY and received a BA in the History of Art in 1975.

Masi left Art and Design in 1979 and became a full partner at Ads ‘n Color, one of the city’s busiest and most respected graphic arts and printing companies. Clients included prestigious designers, art studios, major corporations, schools, and universities.

In 2000, after some 40 years of working, Masi sold his business. At last, he was ready, having put three children through college, to fulfill his boyhood dream of becoming a full-time artist.

For almost ten years, Masi has focused almost exclusively on painting NYC’s bridges, starting with the Queensboro. To date, he has completed more than 100 bridge paintings and named the series, “Bridgescapes.”

Masi is a watercolorist, but his paintings do not look like watercolor paintings. Watercolor, being a thin medium, organically allows expression of the most delicate subjects, but Masi has developed a novel way to use watercolor thickly, in the same way that others use oils thickly. It is an approach that produces exceptional results. Masi’s unique use of watercolor allows him to capture each bridge’s mass, power, and delicacy.

In 2006, The Artist’s Magazine chose his painting of the Queensboro Bridge, “N.Y. Tramway II,” as First Place winner in the Landscape category in the magazine’s “Best Art” contest. The magazine described “N.Y. Tramway II” as “dark and pulsating” and relating “a stirring, overpowering sensation.” The 2006 contest received some 14,000 entries. Many additional honors have followed.

Antonio Masi, is President of the American Watercolor Society and has had feature articles in The Artist’s Magazine, PBS – “Sunday Arts”, NBC-TV “Weekend Today in New York”. Newsday feature in Aug. 20, 08, “Bridgemaster” and in June 2009 a solo exhibition for The New York Centennial Commission of the Queensboro Bridge, and in 2010 a solo show at The Forbes Gallery in New York City, and The New York City Transit Museum in 2012, also at The Salmagundi Club of New York and The New York Times video, Sept. 2014 titled, “Living City: A Tale of Two Bridges”.

In 2016, he was invited as a guest artist to demonstrate, teach and lecture for 3 weeks by the Qingdao International Watercolor Salon, in China.