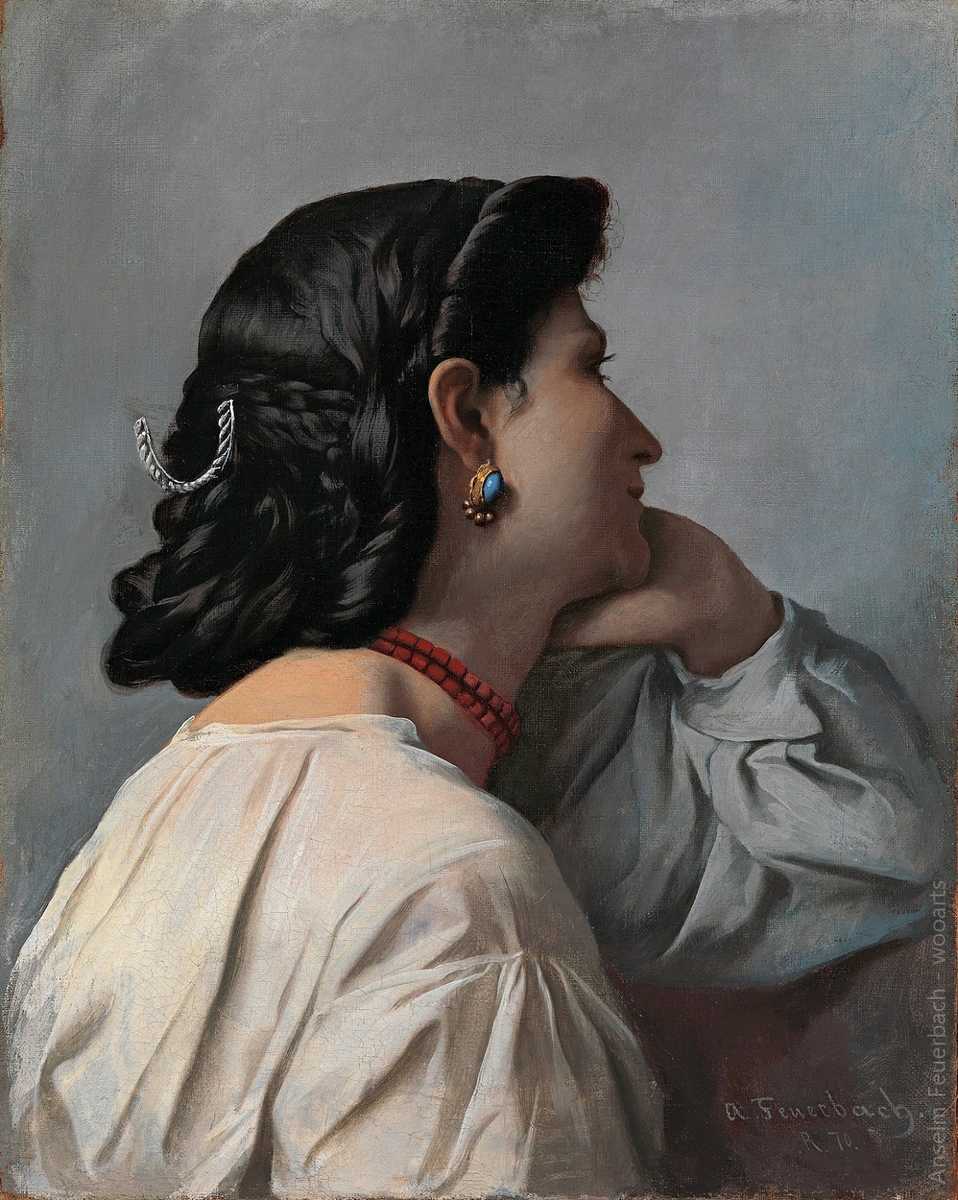 Anselm Feuerbach (12 September 1829 – 4 January 1880) was a German painter. He was the leading classicist painter of the German 19th-century school.

Feuerbach was born at Speyer, the son of the archaeologist Joseph Anselm Feuerbach and the grandson of the legal scholar Paul Johann Anselm Ritter von Feuerbach. The house of his birth is now a small museum.

Between 1845 and 1848 he attended the Düsseldorf Academy, where he was taught by Johann Wilhelm Schirmer, Wilhelm von Schadow, and Carl Sohn. He went on to the Munich Academy, but in 1850, along with a number of other dissatisfied students, he moved to the academy at Antwerp, where he studied under Gustav Wappers. Feuerbach moved to Paris in 1851, where he was a pupil of Thomas Couture until 1854. It was in Paris that he produced his first masterpiece, Hafiz at the Fountain (1852).

In 1854, funded by Grand Duke Friedrich of Baden he visited Venice, where he fell under the spell of the greatest school of colourists, several of his works demonstrating a close study of the Italian masters. From there he continued to Florence and then to Rome. He remained in Rome until 1873, making brief visits back to Germany. In 1861 he met Anna Risi (known as “Nanna”), who sat as his model for the next four years. In 1866 she was succeeded as his principal model by Lucia Brunacci, an innkeeper’s wife who posed for his pictures of Medea. In 1862 Feuerbach met Count Adolf Friedrich von Schack, who commissioned copies of Italian old masters from him. The count introduced him to Arnold Böcklin and Hans von Marées. The three artists became known as the Deutschrömer (“German Romans”) because of their preference for Italian over German art.

Between 1869 and 1874 he painted two versions of Plato’s Symposium.

In 1873 Feuerbach moved to Vienna, having been appointed professor of history painting at the Academy. Among his students Ludwig Deutsch, Rudolf Ernst and Jean Discart. later, Feuerbach developed a disagreement with architect Theophil Hansen over his ceiling mural The Fall of the Titans, painted for the Great Hall of the new Academy building on the Ringstrasse. While in Vienna he came to know Johannes Brahms. Brahms later dedicated a composition to Feuerbach, Nänie.

In 1877 he resigned from his post at the Vienna Academy and moved to Venice, where he died in 1880. Brahms composed Nänie, a piece for chorus and orchestra, in his memory.

Following his death, his step-mother Henriette, to whom he had always been close, and who had always done much to promote his career, wrote a book entitled Ein Vermächtnis (“A Testament” or “A Legacy”), including his letters and autobiographical notes. It proved enormously successful and greatly enhanced his posthumous reputation.

According to the 1911 Encyclopædia Britannica:

He was steeped in classic knowledge, and his figure compositions have the statuesque dignity and simplicity of Greek art. He was the first to realize the danger arising from contempt of technique, that mastery of craftsmanship was needed to express even the loftiest ideas, and that an ill-drawn coloured cartoon can never be the supreme achievement in art.

His works are housed at leading public galleries in Germany. Stuttgart has the second version of Iphigenia; Karlsruhe, the Dante at Ravenna; Munich, the Medea; and Berlin, The Concert, his last important painting. Other major works include The Battle of the Amazons, Pietà, The Symposium of Plato, Orpheus and Eurydice and Ariosto in the Park of Ferrara.

In 1850 he went to Antwerp, where he studied with Gustave Wappers, and in 1851 to Paris. There he studied the modern masters and worked in Thomas Couture’s studio. Two of his first paintings, Hafis in the tavern and the death of Pietro Aretino, show the influence of coutures, but also point to the example of the Venetians, who later became more closely involved. Other painters who influenced him during this period were Eugène Delacroix, Gustave Courbet, Constant Troyon and Théodore Rousseau. Possibly, he also had contact with Édouard Manet in 1853.

In 1854 he returned to Germany and in 1855 he went to Heidelberg, where his now widowed stepmother and his sister Emilie lived. There he came into contact with Joseph Victor von Scheffel. He lived in Karlsruhe until April 1855, then went on a study trip to Italy with Scheffel, which led him first to Venice, where he copied Titian’s Ascension. In the summer he stayed at the Castel Toblino and did landscape studies. In late autumn he underwent syphilis in Venice. His journey took him to Florence and Rome in 1856, where he became acquainted with his later biographer, Julius Allgeyer, and where his studies of Michelangelo and Raphael gradually developed his own special direction. It was based on the historical-monumental style, but also on the richness of the colors of Venetian painting, but the luminosity of the local colors was dampened by gray tones. This met with violent criticism among his contemporaries.

In this period, Dante and the noble women of Ravenna (1858) were born.

From 1857, Feuerbach was a member of the German Artists’ Association in Rome. He became more familiar with Arnold Böcklin, Reinhold Begas, Karl Friedrich Fries and Ludwig Passini. From the collector Ludwig Landsberg he received the order for Dante. At that time he rented a studio in the Palazzo Costa. Because he wanted to keep his painting Dante, Feuerbach paid back in 1858 with the help of a loan from Scheffel Landsberg’s advance. The work was publicly exhibited in Piazza del Popolo in March and April. The German Consul in Palermo Karl Wedekind ordered a half-fledged children’s stand at Feuerbach after a visit to the studio.

In 1860 Feuerbach met Anna Risi, called Nanna. The wife of one of the artisans who came to Rome became his model and his mistress. This began the series of famous Nanna portraits. From May to October he was in Heidelberg for portraiture. In 1861 Feuerbach planned his Iphigenia and the banquet. In the summer he studied marine studies in Anzio. He rejected a call to the Grand Duke School of Art founded in Weimar in the previous year.

During his stay in Rome, he found a patron from 1862 to 1868 in Count von Schack, who bought eleven of his works. The stepmother Henriette was gradually leading the business correspondence with Schack.

The Iphigenia was exhibited in Karlsruhe, Stuttgart and Berlin in 1862.

Francesca da Rimini and Paolo Malatesta, Laura and Petrarca, Hafis at the Well, Pieta (1863) and children’s paintings: Idyll from Tivoli, Deaf children’s concert and Mother’s happiness. If, in addition to the classical forms, these romantic paintings were still a romantic feature, Feuerbach from this point onwards turned almost exclusively to depicting ancient objects in the garment of modern colorism, which was muted and bound by a completely plastic form treatment. Examples of this are Iphigenie (1871, Staatsgalerie Stuttgart) and Die Gastmahl des Plato (1873, Berliner Nationalgalerie) as well as Die Amazonenschlacht, The judgment of Paris and several pictures from the saga of the Medea. Feuerbach’s friendship with Bocklin broke, and he harbored suicide. In 1865 Feuerbach again worked on the composition of the banquet. He concluded a closer acquaintance with Hans von Marées. His beloved Nanna left him and went with an Englishman to southern Italy. Feuerbach spent the summer of 1866 again in Anzio to study the background of Munich Medea. He met Lucia Brunacci, who became like Nanna his model and his mistress. In October he went to Berlin. Feuerbach believed that by the victory of Prussia over Austria in the German war the cultural center of Germany would be formed there. He received a commission for the Medea and Ricordo di Tivoli.

In 1867 Feuerbach finally found a large studio in Via S. Nicola da Tolentino in Rome. At the end of March he traveled to Baden-Baden. He now had closer contact with Clara Schumann and Johannes Brahms. In October he returned to Rome, where Feuerbach and Marées met with Conrad Fiedler. The relationship with Fiedler quickly cooled down, because he supported the destitute Marées. In December 1868 the relationship with Schack was broken off.

In 1869 Feuerbach completed the first version of the banquet, which he exhibited at the Great International Art Exhibition in Munich. There the picture was acquired by the painter Marie Röhr. The Karlsruhe Kunstverein was working on an exhibition of the banquet. The possibility of a call to Karlsruhe also stood in the room, but Feuerbach reacted in a negative way. Nevertheless the Medea was exhibited in Karlsruhe in 1870. The court in Karlsruhe was interested in Feuerbach, but the latter, by means of surpassed demands, raised the intention of the Grand Duke to draw him to Karlsruhe. In July of this year he was in Berlin. By the outbreak of the Franco-Prussian War, he was only able to return to Rome in September. In autumn he finished the Paris judgment with the help of Ferdinand Keller, who was sent to the Berlin Autumn Exhibition.

In 1871, Feuerbach began work on the second version of the Amazons’ Battle and on the second version of the banquet. In 1872 he traveled to Heidelberg and from there to Vienna, where he met Rudolf Eitelberger for the first time, and for a professorship at the Vienna Academy of Fine Arts. The professor was appointed on 7 August. Feuerbach finished his Amazonsschlacht and went to the Academy of Fine Arts in Vienna in June 1873. In the year 1873 also the death of the sister Emilie fell. Feuerbach was not represented with pictures on the crowded Viennese world exhibition and swayed in the face of the successes of Hans Makart between admiration and envy. In 1874 he exhibited The Amazons’ Battle and the second version of the banquet at the Künstlerhaus in Vienna. The critics reacted negatively.

Feuerbach commuted between Vienna and Rome in 1875 and was exhorted by the Ministry for non-submitted leave. From October he was back in Vienna. He began with the work on the titanic fall for the ceiling of the auditorium of the Academy of Fine Arts in Vienna. He worked intensively on this work from 1878 onwards; He did not realize it in Rome until 1880, owing to disagreements with the architect Theophil Hansen; At the Munich exhibition in 1879, however, the tide of the Titans was met with severe criticism.

In March, 1876, Feuerbach fell ill with a pneumonia. With a high fever, he went to Heidelberg for the pious mother. A large part of his life-memories arose as a pamphlet, as a settlement with his contemporaries, a. Also about Makartism – Pathological Appearance of the Modern Age. In June Feuerbach filed his discharge request in Vienna. In July Henriette Feuerbach moved to Nuremberg; Until 1879, Feuerbach commuted between Nuremberg and Venice.

In the last years of his life, Feuerbach, who had occasionally played with the idea of ​​going to London as a portrait painter, produced a painting for the Justice Palace in Nuremberg, the homage of Ludwig of Bavaria. Feuerbach was buried in Nuremberg on the St. Johannisfriedhof. In April 1880, a large memorial exhibition of his estate took place in the Berlin National Gallery.