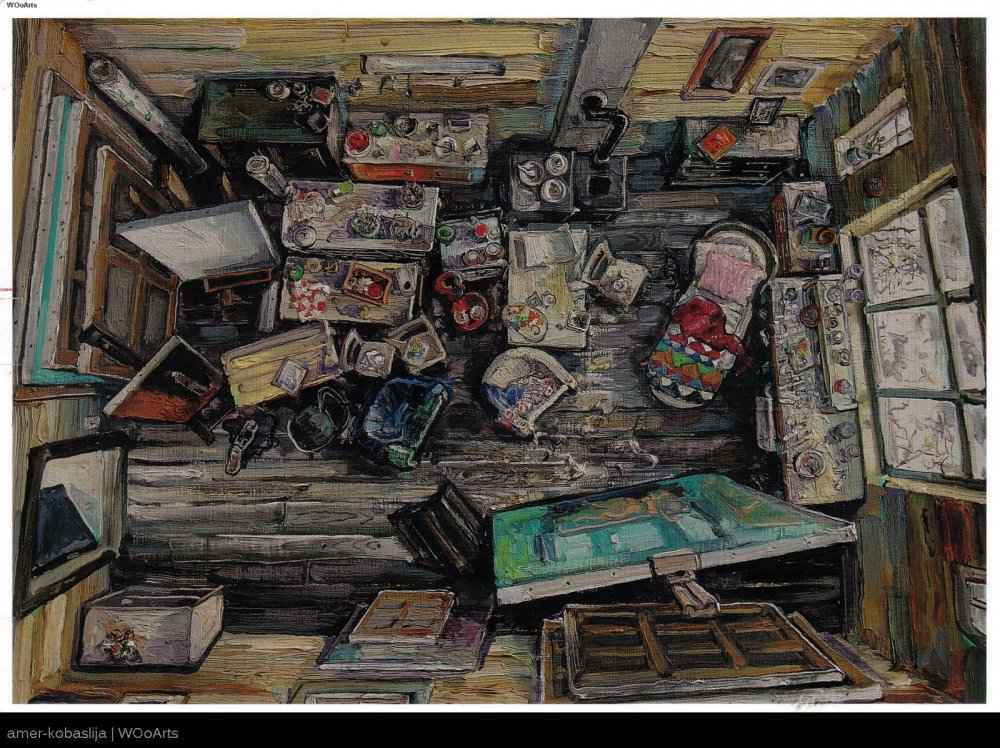 [slider title=”Click here to read the rest of his page”]

Susan Brandenburg
Ponte Vedra Beach
Published Saturday, July 18, 2009
Bosnian artist Amer Kobaslija of Jacksonville was feted royally last Saturday evening at the elegant, art-filled Ponte Vedra home of Sherry and Jerry Chait.
At a sit-down dinner for more than 30 guests, including several long-time patrons of Kobaslija’s art, the young artist’s new position as a professor at Bowdoin College in Brunswick, Maine, was celebrated by all. One of 940 applicants for the job at the college, Kobaslija won the position with both his reputation as a successful artist who is represented by galleries in New York, Paris, Los Angeles, and San Francisco, and for his academic credentials: a bachelor of fine arts degree from Ringling School of Art & Design in Sarasota and a master of fine arts degree from Montclair State University in New Jersey.

Attending the Chaits’ send-off for Kobaslija were several Ponte Vedra Beach friends, including German-born American artist Susanne Schuenke, Amy Broudy, Sheldon and Rita Freidman, Tom and Mary Jo Linnen, Luana and Charles Valentine, and Nurhan and Doris Manukian.
“I first met Amer back in the early ’90’s as a very young Bosnian immigrant attending one of my ESL [English as a Second Language] classes at FCCJ,” recalled retired educator Doris Manukian. “When he invited me to his art exhibit at Lutheran Social Services, I wanted to help him out by buying a painting, so I sent my husband to choose one, and he came home with four! They turned out to be a very good investment.”
Posing with her guest of honor in front of one of several paintings by him that hang permanently in her home, art dealer and collector Sherry Chait talked proudly of Kobaslija’s steady, determined rise in the art world and of her early recognition of his talent and tenacity.
“Sherry believed in me when no one else did,” said Kobaslija. “She’s encouraged and supported me every step of the way.”
While he is eager to begin his professorship at Bowdoin in late August, Kobaslija and his wife, Akiko, vow that they will return regularly to Jacksonville because his parents live here.
And this coming month, the artist and his wife will spend some time in Switzerland visiting at the castle of the late Balthus, a reclusive and eccentric artist whose works are admired by Kobaslija and collected by celebrities such as Richard Gere, Bono, Johnny Depp and Federico Fellini.
“The Prime Minister of Japan will arrive at Balthus’ castle on Aug. 2,” said Kobaslija with a grin. “Akiko and I have some great adventures ahead of us. Life is good.”
*
Amer Kobaslija is proof positive that meeting life head on with passion and enthusiasm and making things happen rather than waiting for them to happen can often be the key to reaching your goals. Those characteristics and more are the subjects that will be addressed in a free two-day Job Seeker Workshop at Christ Episcopal Church in Ponte Vedra Beach from 10 a.m. to 5 p.m. July 25 and Aug. 1 in Room 208 of the Christian Formation Building. Charlie Hoskins, a former executive recruiter and corporate head of human resources, noted that the Job Seeker Workshops (held quarterly) began about three years ago as a service to the church’s parishioners and have expanded in the last year to be open to the general public.
“We’ll have insightful presentations by several members of our church, including Walker Allen, an entrepreneur and former corporate executive; Jane Wytzka, an executive career coach; Terry Walton, a former executive recruiter and now career coach; and possibly Jeryl Mitchell, a corporate human resources executive,” Hoskins said.
“At this time, with the number of people who’ve been victimized by the economy, a lot of folks are anxious about finding a job, and we hope we can help prepare them to get themselves out there and in front of as many decision-makers as possible. This is our gift to the community.”

Amer Kobaslija’s (In) Significant Objects is a metaphorical look into the realm of the artist’s inner sanctum: the cluttered live/work space. Evoking the concepts of religion and ritual, Kobaslija takes great care in detailing a chaotic jumble of “artifacts” that simultaneously exist, yet are not allowed any more significance than another object within the same space. Paint supplies, photo equipment, towels, clothes, empty water bottles, cell phone, microwave, pocket change, all serve as portals into the mind of the artist. By allowing a multi-linear perspective within the composition; a bird’s eyed from above, halfway up a corner wall, or from one room end to the other, the gaze is denied any dominant focal point in which to consume the space. The viewer is no longer just an observer, but a particpant in the ritual of sorting through possibilities in an attempt to move toward an artistic resolution that is the summation of relevant personal data reflecting both the inner and outer world of the artist.

Kobaslija was born in 1975 in Bosnia. He received a BFA from the Ringling School of Art & Design in Florida and an MFA from Montclair State University in New Jersey. He was awarded a Joan Mitchell Foundation Grant in 2005.
Source: renabranstengallery.com/Kobaslija_Tour08.html

Florida Studio III
Photograph: Courtesy George Adams Gallery
Amer Kobaslija’s visual world teeters between the studio and the public restroom, the subjects of his latest paintings. Depicted from odd angles and vertiginous perspectives, the sutdios seem to list and heave in some panels; in others, the walls appear to fall open. His anonymous bathrooms, also captured from odd angles, are littered with smashed bottles, soggy cardboard and sodden mops—the sort of place where you end up when the room begins to spin.

Such images lend themselves to any number of interpretations. The studios, off-kilter, clotted with rags, brushes and canvases, might be symbols of our affluent, if unmoored society; the toilets, meditations on selfishness and excess. That Kobaslija grew up in Bosnia during the time of ethnic cleansing further suggests that he is reminding us of how easily things can fall apart.

The use of mirrors as well as paintings within paintings to complicate pictorial space reflects conceits used by artists for centuries to show off their craft and its tenuous relationship to reality. The eviscerated carcass hanging in Florida Studio 3, for example, recalls Rembrandt’s Slaughtered Ox. So perhaps Kobaslija is really exploring the illusionistic and imaginistic aspects of his medium.

However, such references quickly become tiresome, especially in the larger pieces in this show. Luckily, the smaller, simpler ones remain compelling.
Source: newyork.timeout.com/arts-culture/art/23179/amer-kobaslija-the-poetics-of-space-new-paintings