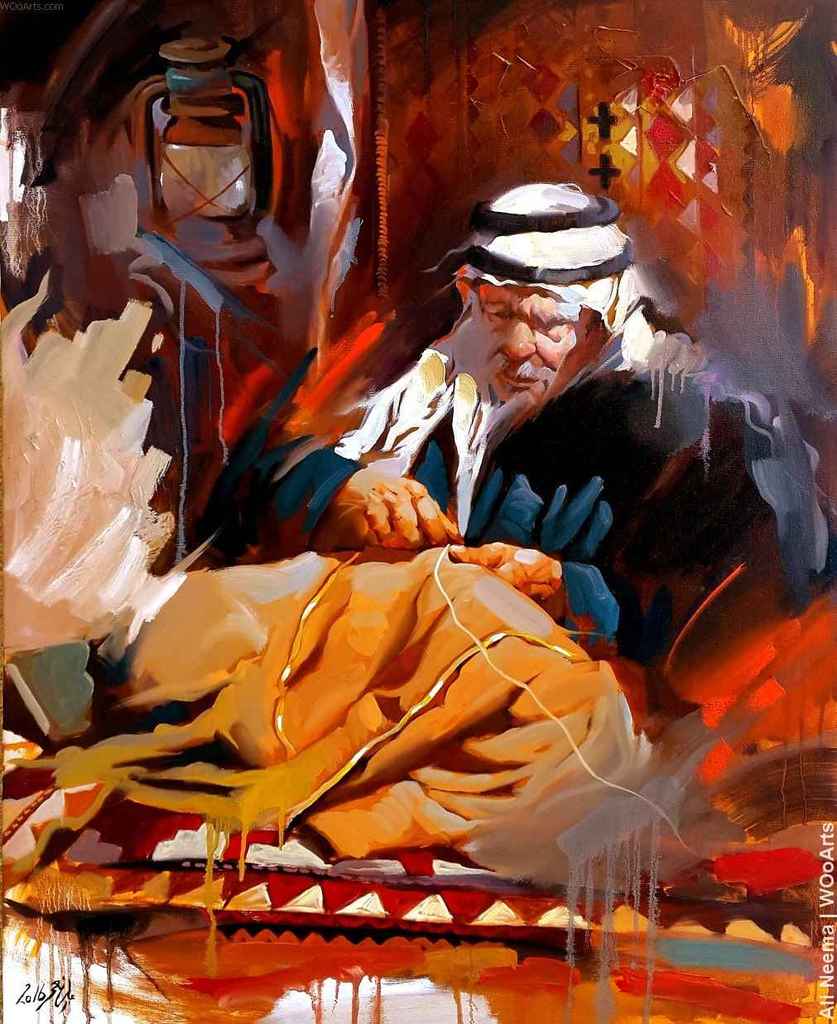 The Paintings of Ali Ne’ma

Ali Ne’ma is an elite Iraqi painter who portrait the Iraqi culture using exquisite color palette. His bold brush strokes emphasize expressions and abstract details, he let the viewers create the extra details and feels the warms of such culture.

Ali Ne’ma, a young Iraqi artist assured his strong presence in the contemporary Iraqi plastic art scene. He is a descendant of a family that presented three influential artists in the modern Iraqi fine art.
Ali is the youngest brother of the artist Riad Ne’ma and the Tahsin Ne’ma. Each one of the three brothers worked on a different point of expression and art style.

Ali specialized in engaging his creative effort on the realism verge, color-blasting and creative approach to make reality closer to dazzle the viewer eyes. The work of the young Iraqi artist Ali Ne’ma celebrates the real atmosphere and oriental of the Baghdadi symbols, in particular, while working on the aesthetics of dazzling spectacles without being restricted to the spirit of rigid reality, but he adds the colorful touches that influence it with the fun of visual spectacles, and to make the viewer dream of the present that seemed to be in the past spirit.

All coming from the joy of the lost present, alleys, horses, Baghdadi women and lovely faces from presence in of the folklore memory.
Briefly, it is the artist vocabulary, elements and features in his paintings, yet it does not hide that Ne’ma obviously was influenced by the Iraqi pioneers’ artists such as Fayek Hassan and others in the Iraqi realism early movement formation.

Here, we cannot neglect to reference that he is influenced by consistency effect and its conformity with reality, the work of art is based mainly on conscious will and composition of the general structure of the painting. It comes from a creative pattern perception that is based on the school realism aspects, which helped on his career beginning.

He remained focus on the realism spirit until he arrived at advanced stages of mastery of that art and color control. Then, his style became a distinct from all his peers.

Ali Ne’ma creative works is only an attempt to discover a new horizon ahead of his artistic and aesthetic achievement, applying the content of the realistic form in the service of the discourse of theological and aesthetic, through the study of the life routine of the social environment and its daily issues.

The young artist mixes between many of themes, mixing and melting them, adding a suggestive perspective or dimension to the colored space and the accompanying symbols the reality. In which the color is forming the brightness force of the balance, for the formative compatibility and create the indicative meaning of the accumulated and overlapping object symbol which turns into mystical emoticons And reshaping it in a clear and humane conceptual framework.