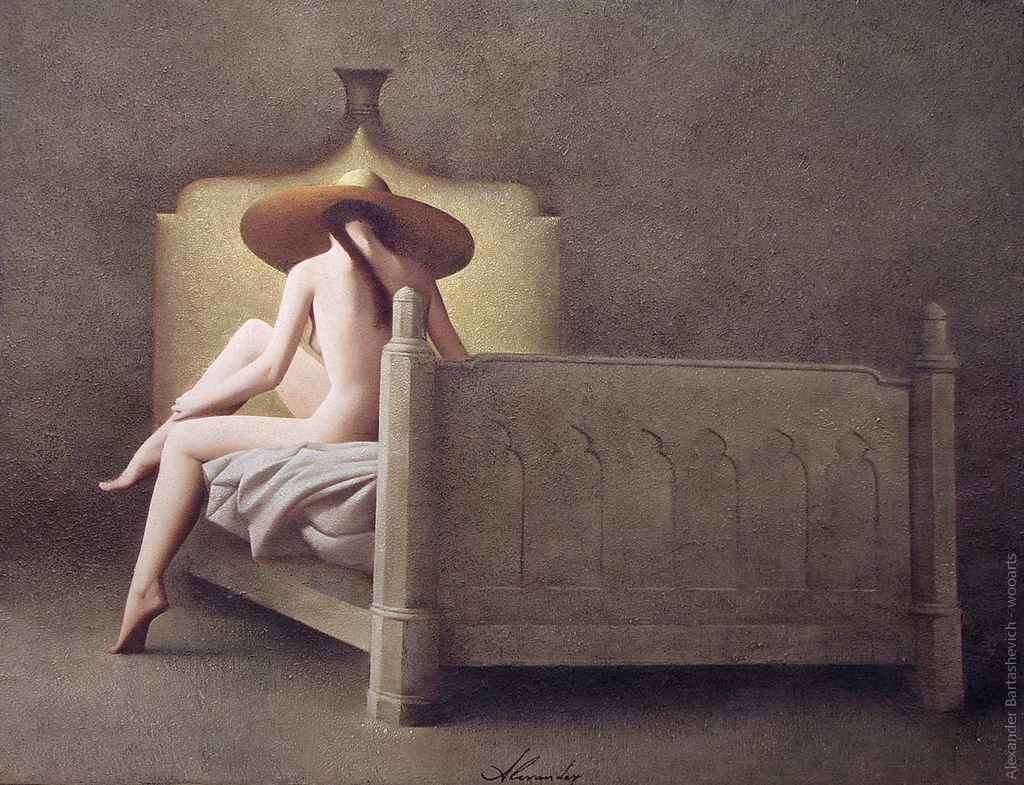 Alexander Bartashevich (Александр Барташевич) was born in Minsk in 1966. He graduated from the Art College and later from the Belarusian Art Academy. The artist determined his own recognizable style in his first student works. Since then he stays true to his aesthetic concept, which can be expressed by a short formula: “hidden charge at heart – harmony and peace on a canvas”. Over the following 20 years of creative work Alexander has only sharpen his skills at finding a sublime beauty in everyday life.

Roughness of clay, mute gleam of brass and copper, matte of old glass, lightful transparency of porcelain – the texture of each object, their volumes, even weight are transmitted very palpably. It seems that the surface of the image can be caressed and the bulges can be grasped … Assuming the materiality of objects, their textural variations are transferred not by using different textures per se – it is structurally identical on the entire canvas. The texture does not carry any decorative function – it is isomorphic, homogeneous and coarse-grained; this is sort of an absorbing layer that “dries up” the material side of depicted objects to the limit.

Oiliness, playfulness are not the part of the artist’s technique. He is not involved and doesn’t involve a viewer into any kind of sensual beauty; you won’t lose your heart in his material world, there’s nothing to seduce you… It’s just a jug or a kettle, or a bouquet of lilacs from an abandoned garden, or a bottle. Neglected tools. Deserted House. Childhood memories…. Nostalgia for lost paradise? Partly. But with no pain, since in the world, created by the artist, there is no past, time stands still and the things and people are frozen.

Alexander Bartashevich is a laconic artist. He does not seek to reinvigorate and to decorate the background and to fill it with a multitude of bright details. On the contrary, he often leaves a lot of free space, balancing objects and voids. Blank, non-figurative background is important not only for the composition of the painting, but for its sense. Worth recalling in this regard is a method of “omission”, when something unspoken could be felt with the same strength as something obviously perceived. We see not the object itself but its echo. The echo of the object hidden, covered with haze. The image has lost its connection with the outside world – usually, objects and figures are placed in the intimate environment of the painting, with no signs of an interior and time. Such a spatio-temporal depersonalization of the background adds a metaphysical touch to Bartashevich’s art.

The atmosphere of loneliness. Balance and peace. Soft and casual beauty, but sublime at the same time – it lives in the world of tranquil and silence. Aloofness from everyday life. Calm smoothness of lines. Ray of light that takes out the contours of the soft half-light. All this can be said looking at any of the paintings. Alexander Bartashevich is faithful to simple things: foggy alleys, remote huts, crown of a tree, plain kitchen utensils and garden flowers. Virtuous are his images of women, their faces staying calm; their unearthly tranquility is almost impersonal. And the inanimate objects are endowed with the same meditative mood. A house, a pitcher, a tree or a man – they are all equally imbued with the universal life by the artist.