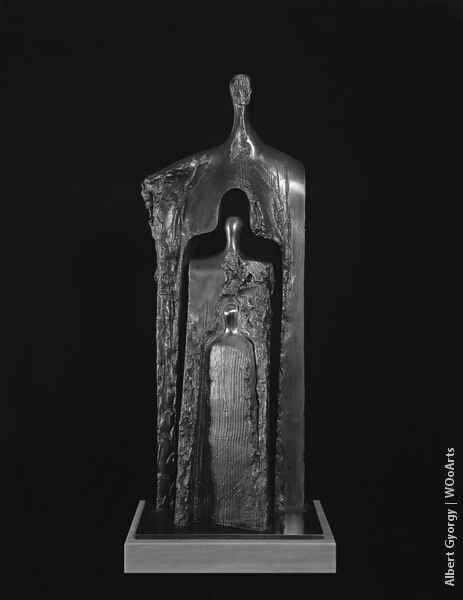 Albert György was born in 1949 in Lueta, Romania (Transylvania, a region with a Hungarian minority).

The sculptor’s career is marked by a double human and artistic adventure, which has always been a sort of tension between contrary aspirations.

Romania and Switzerland. In Romania, the birth in Transylvania, belonging to the Hungarian minority suffering discrimination. This does not prevent him to follow the official artistic teaching, to win many distinctions, to make national and international exhibitions. At the end of his studies in Bucharest, he was able to return to settle in Satu-Mare, where the air is a little more breathable. He creates his own foundry, to obtain the best bronze quality. But despite his travels abroad for his exhibitions in Warsaw, Berlin, ex-Yugoslavia, Chile, he lives in isolation, sadness. His first wife dies, he has no connection with Romania. He enjoys an exhibition in Geneva to settle in Switzerland. This is the second slope of his life. He will finally be able to enjoy freedom.

It’s a new start, difficult but dazzling. His job, he knows him thoroughly. He practices bronze better than anyone. He has developed a personal alloy of copper and tin which makes it possible to obtain a bronze that is both supple and solid, creating astonishing shades of the patina when it is oxidized, and of a brilliant color when he is polite.

If one’s style evolves sensitively, because one’s vision is amplified, decanted, freed from constraints. In Romania, he could act as a daring artist, but his works reflected the weight of life, the past and also various influences: the most fruitful as those of Brancusi and Moore, and then those, heavy, middle. In Switzerland, after a period of adaptation, his art turns resolutely towards the future. From stylized figuration and goldsmithery, his sculptural language is oriented towards the monumental, toward architecture.

Albert György’s work illustrates the tension between character and emotion. Nothing is acquired, nothing comes automatically, creation is a struggle, both material and spiritual. If today his works reflect a new impetus, they remain marked by a pathetic temperament, by an ardent sensitivity. This one is undoubtedly more attentive, today, with the alive energies of our time, captured and reflected with acuity.

But the material brings the noble testimony of the unity of György’s approach, faithful to bronze. […]

In its complexity and diversity, the visionary art of Albert György testifies to a personal dialectic between suffering and happiness. Nothing decorative or talkative in this game of creative tension leading to a living alloy, imbued with the purest necessity.

In 1987 Albert György settles in Switzerland where he sets up his creative workshop and his foundry
Since 1973 He settled in Satu-Mare, Romania, where he continued his artistic activities
1968 – 1973 Institute of Fine Arts Nicolae Grigorescu, Bucharest, Romania
Diploma of the Institute with honors Excellent
1962 – 1968 School of Fine Arts Tirgu Mures, Romania

Many sculptures are exhibited in various state museums as well as in private collections in Romania, Canada, USA, France, Germany, Sweden, former Yugoslavia. Hungary and Switzerland.

Albert Gyorgy is a Romanian Postwar & Contemporary artist who was born in 1949. Albert Gyorgy’s first artwork to be offered at auction was Flyght at Kaminski Auctions in 2011; the work was unsold.

Good Read:
Gazing at the figure, I felt a physical reaction, a shiver, or perhaps more like the quiver of a struck bell. And I guess I wasn’t the only one who resonated to Romanian artist Albert Gyorgy’s “Melancolie”: the sculpture went viral on Facebook a few weeks ago. I wasn’t surprised that many comments came from viewers who’d suffered a great loss. A fellow grieving father responded: “We may look as if we carry on with our lives as before. We may even have times of joy and happiness. Everything may seem ‘normal.’ But THIS, ‘Emptiness,’ is how we feel … all the time.”

Later that same week, I mentioned to an old friend that the hole left in my heart by the death of my daughter would never go away. He seemed surprised and upset. “I had no idea,” he said. “I thought because you’re a Christian, your faith would sustain you. I feel sorry for you.”

No, I wanted to say, don’t feel sorry for me. My faith does help me. My life isn’t sad. My life is in some ways more joyful than it’s ever been. I continue to have a close relationship with Laurie. I—

And as I felt myself thrashing about, frustrated at not having the words to describe what it’s like to lose a child, I realized what an intricate and perplexing landscape this emptiness through which I journey really is.

There’s the idea of emptiness as Void, empty of meaning. It’s a frightening place. When my ex-wife phoned me with the news that what we’d always thought was a harmless sebaceous cyst on the back of our daughter’s head was malignant, I felt the ground opening under my feet. I remember needing to grab on to the counter I was standing beside. Mary Lee has since told me that when I picked her up at school later that day and she opened the door to the car, she felt an icy emptiness even before I told her the news.

The title of the sculpture, “Melancolie,” or melancholy, refers back to medieval medicine and to one of the four “humours,” black bile, thought to cause what we today call depression. This, too, is a kind of emptiness, at least when I look at some of the therapy websites that define emptiness as “a negative thought process leading to depression, addiction…”—both of which I’ve stumbled through since Laurie died.

But over those same years, I’ve also found that emptiness can be something to cultivate rather than cure.

My first readings about emptiness were from existentialists like Albert Camus, who saw meaninglessness as a reality of life, but who posited that we can and should create our own meaning. From there, I dabbled in Buddhism, where Emptiness is a central precept. But as I understand it, Buddhists do not believe life is meaningless; rather, that our images of ourselves as separate, independent entities don’t exist: they’re delusions, empty of meaning. When we can understand this meaning of emptiness, we realize that we are part of what the Buddhist monk Thich Nhat Hanh calls “inter-being,” which is the basis for wisdom, bliss, compassion, clarity, and courage.

Then, as I’ve written about before in these blogs, I learned a form of Christian meditation called “Centering Prayer,” which is based on “kenosis,” or “self-emptying.” As Saint Paul wrote in Philippians: Jesus “emptied himself, taking the form of a slave ….” Notice how many of the parables in the Bible advocate giving up everything, whether it’s Jesus telling the young man to give up his money and possessions and follow him, or the Good Samaritan giving up his money and time to minister to the man who’d been beaten and robbed, or the servant condemned for burying his one Talent.

And it was through practicing kenosis—entering into the emptiness I felt after Laurie died, giving up my image of myself as grieving parent—that I was able to feel Laurie’s renewed presence in my life. (For more on my experiences with Centering Prayer, see http://geriatricpilgrim.com/2016/06/)

Lately, I’ve been working a 12-Step program based on surrender, which as a speaker I heard recently said, “only happens when there’s nothing left.” Only when circumstances force you to see that all of your props, your addictions, have not only proved worthless in giving you what you need, but are actually keeping you unhappy, is it possible for you to give them up, empty yourself of them.

And yet. No matter how much I read about the subject, how often Laurie’s spiritual presence fills my emptiness, my daughter’s physical absence burns like an amputation. I will never have the chance to watch her face grow more interesting as it ages, never watch her take up a vocation, fall in love, perhaps have children.

And maybe that’s the price we pay for loving someone. A friend of mine who lost her husband a year ago recently sent me the following quotation from Dietrich Bonhoeffer, German Lutheran pastor and theologian:

Nothing can fill the gap when we are away from those we love, and it would be wrong to try to find anything. We must simply hold out and win through. That sounds very hard at first, but at the same time, it is a great consolation, since leaving the gap unfilled preserves the bonds between us. It is nonsense to say that God fills the gap. He does not fill it but keeps it empty so that our communion with another may be kept alive, even at the cost of pain.

So, emptiness for me is another landscape through which I pilgrimage—four steps forward, three steps back, two steps side-ways, circling, backtracking. Sometimes the views are bleak and dismal and the path is strewn with the rocks and roots of depression and addiction, but more and more often these days, as I’ve surrendered my seventy-year-old resentments at people long gone from my life, my judgmentalism, my shame over not being perfect, I’ve seen some magnificent vistas, felt fresh air tickling what little hair I have left, heard birds singing hymns of grace.

A SCULPTURE THAT CREATES INTENSE EMOTION
by Mary Friona-Celani
It is called Melancolie. And it is heartbreakingly beautiful.

The artwork created by Albert György (living in Switzerland, but born in Romania) can be found in Geneva in a small park on the promenade (Quai du Mont Blanc) along the shore of Lake Geneva.

Millions (more than 11 million people) have viewed it from our Facebook Page so we wanted to take a few moments and share more about the sculpture and artist.
György was born in Romania in 1949. He lived in isolation and sadness after his first wife died, so he understands grief. He was given what he calls in reports – a second slope of his life where he is able to enjoy freedom.

The sculptor developed a special alloy of copper and tin which he used for his work.
His work is revered by many and I found this quote about his work – “In its complexity and diversity, the visionary art of Albert György testifies to a personal dialectic between suffering and happiness. Nothing decorative or talkative in this game of creative tension leading to a living alloy, imbued with the purest necessity.”

The incredible, heartbreaking artwork is extremely touching and very emotional. Reading the comments on the Facebook Post are heartbreaking and show the power of love. A mother’s love. A father’s love. Grandparent’s love. Love of siblings, friends and strangers. The thought of losing a child is unimaginable – but for many, it’s all too real and some have written that this sculpture depicts how they feel – an emptiness. John Maddox wrote, “We may look as if we carry on with our lives as before. We may even have times of joy and happiness. Everything may seem “normal”. But THIS, “Emptiness” is how we all feel…all the time.”