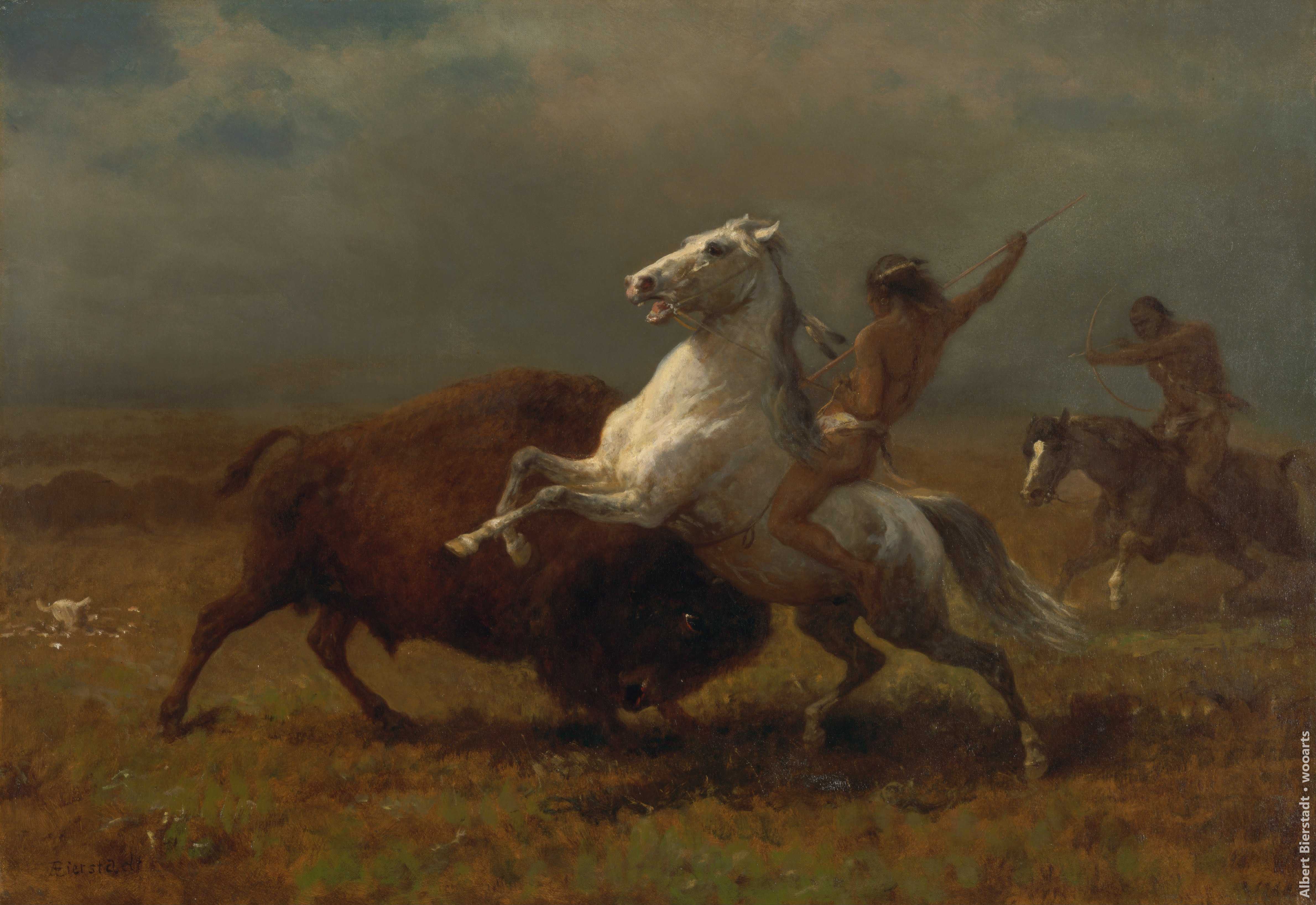 Albert Bierstadt was a German-American painter best known for his lavish, sweeping landscapes of the American West. He joined several journeys of the Westward Expansion to paint the scenes. He was not the first artist to record the sites, but he was the foremost painter of them for the remainder of the 19th century. (January 7, 1830 – February 18, 1902)

Bierstadt was born in Prussia, but his family moved to the United States when he was one year old. He returned to study painting for several years in Düsseldorf. He became part of the second generation of the Hudson River School in New York, an informal group of like-minded painters who started painting along the Hudson River. Their style was based on carefully detailed paintings with romantic, almost glowing lighting, sometimes called luminism. Bierstadt was an important interpreter of the western landscape, and he is also grouped with the Rocky Mountain School.

Bierstadt was born in Solingen, Germany, the son of Christina M. (Tillmans) and Henry Bierstadt, a cooper. His brother was prominent photographer Edward Bierstadt. Albert was just a year old when his family immigrated to New Bedford, Massachusetts in 1831. He made clever crayon sketches in his youth and developed a taste for art.

In 1851, Bierstadt began to paint in oils. He returned to Germany in 1853 and studied painting for several years in Düsseldorf with members of its informal school of painting. After returning to New Bedford in 1857, he taught drawing and painting briefly before devoting himself full-time to painting.

In 1858, Bierstadt exhibited a large painting of a Swiss landscape at the National Academy of Design, which gained him positive critical reception and honorary membership in the Academy. Bierstadt began painting scenes in New England and upstate New York, including in the Hudson River valley. He was part of a group of artists known as the Hudson River School.

In 1859, Bierstadt traveled westward in the company of Frederick W. Lander, a land surveyor for the U.S. government, to see those western American landscapes for his work. He returned to a studio he had taken at the Tenth Street Studio Building in New York with sketches for numerous paintings he then finished. In 1860, he was elected a member of the National Academy of Design; he received medals in Austria, Bavaria, Belgium, and Germany.[unreliable source?]

In 1863, Bierstadt traveled West again, this time in the company of the author Fitz Hugh Ludlow, whose wife he later married. The pair spent seven weeks in the Yosemite Valley. Throughout the 1860s, Bierstadt used studies from this trip as the source for large-scale paintings for exhibition and he continued to visit the American West throughout his career. The immense canvases he produced after his trips with Lander and Ludlow established him as the preeminent painter of the western American landscape. Bierstadt’s technical proficiency, earned through his study of European landscape, was crucial to his success as a painter of the American West and accounted for his popularity in disseminating views of the Rocky Mountains to those who had not seen them.

During the American Civil War (1861 to 1865), Bierstadt was drafted in 1863 and paid for a substitute to serve in his place. By 1862, he had completed one Civil War painting Guerrilla Warfare, Civil War based on his brief experiences with soldiers stationed at Camp Cameron in 1861. That painting was based on a stereoscopic photograph taken by his brother Edward Bierstadt, who operated a photography studio at Langley’s Tavern in Virginia. The painting received a positive review when it was exhibited at the Brooklyn Art Association at the Brooklyn Academy of Music in December 1861. Curator Eleanor Jones Harvey observed that the painting, created from photographs, “is quintessentially that of a voyeur, privy to the stories and unblemished by the violence and brutality of first-hand combat experience.”

In 1867, Bierstadt traveled to London, where he exhibited two landscape paintings in a private reception with Queen Victoria. He traveled through Europe for two years, cultivating social and business contacts to sustain the market for his work overseas. His exhibition pieces were brilliant images, which glorified the American West as a land of promise and “fueled European emigration”. He painted Among the Sierra Nevada, California in his Rome studio for example, showed it in Berlin and London before shipping it to the U.S. As a result of the publicity generated by his Yosemite Valley paintings in 1868, Bierstadt’s presence was requested by every explorer considering a westward expedition, and he was commissioned by the Atchison, Topeka, and Santa Fe Railroad to visit the Grand Canyon for the further subject matter.

Bierstadt’s choice of grandiose subjects was matched by his entrepreneurial flair. His exhibitions of individual works were accompanied by promotion, ticket sales, and, in the words of one critic, a “vast machinery of advertisement and puffery.”

Despite his popular success, Bierstadt was criticized by some contemporaries for the romanticism evident in his choices of subject and his use of light was felt to be excessive. Some critics objected to Bierstadt’s paintings of Native Americans on the grounds that Indians “marred” the “impression of solitary grandeur.”

In 1876, his wife was diagnosed with tuberculosis, and from then until her death in 1893, Bierstadt spent time with her in the warmer climate of Nassau in the Bahamas. He also continued to travel to the West and Canada. In later life, Bierstadt’s work fell increasingly out of critical favor. It was attacked for its theatrical tone.

In 1882, a fire destroyed Bierstadt’s studio at Irvington, New York, and with it many of his paintings. By the time of his death on February 18, 1902, the taste for epic landscape painting had long since subsided. Bierstadt was then largely forgotten. He was buried at the Rural Cemetery in New Bedford, Massachusetts.

Posthumous reception
Interest in Bierstadt’s work was renewed in the 1960s with the exhibition of his small oil studies. Modern opinions of Bierstadt have been divided. Some critics have regarded his work as gaudy, oversized, extravagant champions of Manifest Destiny. Others have noted that his landscapes helped create support for the conservation movement and the establishment of Yellowstone National Park. Subsequent reassessment of his work has placed it in a favorable context, as stated in 1987:

The temptation (to criticize him) should be steadfastly resisted. Bierstadt’s theatrical art, fervent sociability, international outlook, and unquenchable personal energy reflected the epic expansion in every facet of western civilization during the second half of the nineteenth century.
Bierstadt was a prolific artist, having completed over 500 paintings during his lifetime.

Born in Germany, Albert Bierstadt became one of the greatest landscape artists in history. Inspired by landscaping of the unsettled American West, Bierstadt created panoramic landscape scenes which were naturalistic, with a touch of romanticism. Bierstadt’s excessive touring of North America, Europe, and the Bahamas gave him a first-hand approach to recreating the views in his paintings. Bierstadt was skilled in photography and made sketches and stenography to recreate his enormous paintings. Although Bierstadt’s works were not fully recognized during his lifetime, they are now a unique part of American history.

Albert Bierstadt was part of the Hudson River School, which was an informal group of painters with similar ideas and styles, such as painting with detail, and romantic, glowing illumination. He was also a member of the Rocky Mountain School, along with Thomas Moran, Thomas Hill, and William Keith, who also interpreted western landscapes. In 1860, he was selected to become a member in the National Academy of Design in New York City, which is an honorary association of artists promoting the fine arts. Bierstadt was also awarded medals in Bavaria, Austria, Belgium, and Germany for his landscape paintings.

Bierstadt’s success developed in two different stages. His paintings became more developed and refined as he sought to learn a distinct naturalistic style, while attending Dusseldorf School, and his extensive touring of scenic landscapes in person gave him the opportunity to model his works from reality. Hudson River School believed that art could be used as a medium of moral and spiritual change, and Bierstadt’s paintings were respected by those viewers who supported American Transcendentalism.

Bierstadt’s The Portico of Octavia Rome was his first painting sold, to the Boston Athenaeum in 1857. His painting career was finally beginning. In 1858, his first official art exhibition occurred at the National Academy of Design, in New York. He was contracted to paint two works by the United States Capital for display, and in 1867, Albert was presented to Queen Victoria, and awarded the Legion of Honor, by Napoleon III. Over his lifetime as an artist, he completed over 500 works, and possibly as many as 4,000 paintings, which are now scattered through art museums in the United States and Europe. Many of his beautiful landscapes are located in the Smithsonian Museum, such as Sunrise in the Sierras, Gates of the Yosemite, and Indians in Council

Albert Bierstadt used oil paints on uncommonly large canvasses, some of which were over ten-feet wide. His panoramic, detailed landscapes captured the vastness of this sometimes unknown, unsettled territory. His paintings appealed to human emotions, using strong colors, and contrasts of light and shade. The contrasts used in his paintings also added dramatic effects, such as the sense of depth, while also creating a mood. The vastness and depth of the landscapes, along with brilliant color, perspective, and detailed textural contrasts made his larger-than-life paintings realistic yet romantic.

Bierstadt received quite harsh criticism from peers, throughout his life as an artist. The extremely large canvasses that he used were thought to be egotistical, dwarfing other artists’ works. Other artists criticized his romantic use of light and colors. Bierstadt painted what he believed the way things should look sometimes, instead of realistically. He used ultramarine colored water, or lush green vegetation, making others challenge its validity. Other artists also criticized atmospheric elements added, such as fog, clouds, or mist, stating that these were added to romanticize the colorless, barren scenery. Albert Bierstadt sometimes did change details of a landscape setting, to inspire awe in the viewer.

Albert Bierstadt became the predominant American West landscape painter for the remainder of the century. At the peak of his career, he resided and had a studio, Malkasten, on the Hudson River, in 1882. In 1886, he married, made various trips to Europe and California and even rode on the Transcontinental Railroad. When his wife acquired tuberculosis, they traveled to the Bahamas. A large number of his paintings were burned in a fire at his studio, along with a large collection of engravings and gifts from General Sheridan, General Custer, and other Army officers during his travels West.

Albert’s wife later passed on in 1893. He remarried, but his paintings were overshadowed by the acceptance of French Impressionism, which became favored over realistic paintings. Bierstadt filed bankruptcy in 1895, and died as a somewhat forgotten artist in New York City, at the age of 72. Albert Bierstadt’s endless valleys, mountainous peaks, and gushing waterfalls transformed the sometimes rugged, colorless and barren wilderness into beautiful scenery which are still appreciated and revered today.

Albert Bierstadt - In the Rockies Painting

Albert Bierstadt - On the Hudson Painting

Albert Bierstadt - On the Sweetwater Near the Devil's Gate Painting